The sad hulk and glorious past of the City of Adelaide 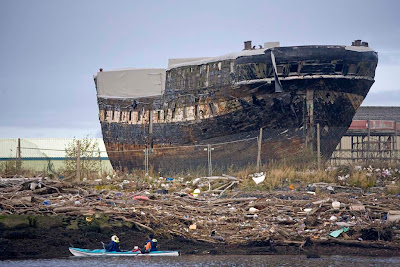 The sad hulk of the once proud City of Adelaide sailing clipper lies high above the flotsam and jetsam of Irvine inner harbour. She was built in Sunderland in 1864 and at one time held the record for the fastest sailing voyage between London and Australia. She has wooden planking over an iron frame and was built to carry both passengers and cargo. Two of the passengers, making a new life on her maiden voyage, were George and Annie Wilcox. (I am not sure if there is any family link.) Her first master was a Scot Captain David Bruce. Two of his sons were later to succeed him as master. All together she made 23 return voyages to Australia until she was sold in 1887 during the Australian depression.

In later life she spent nearly 50 years moored on the Clyde, in the centre of Glasgow, as the RNVR ship SV Carrick. She sank in 1991 and was later transferred to the Scottish Maritime Museum at Irvine. Unfortunately funds have never been found to restore her. A ray of hope exists as an Australian charity "Save the clipper ship City of Adelaide" is raising money for her restoration. The Australians recognize her crucial importance to the history of their country. It is estimated that 1.1 million Australians are descended from immigrants who made the long voyage to the other side of the world in the City of Adelaide.