Finding a leak in a sea kayak.

One of my kayaks developed a leak in the back hatch when it was about 6 months old. It was in no danger of sinking but on return from a camping trip, everything in the back was well damp.

Over the last 10 years or so I have had to deal with this problem quite a few times. 2 times out of 3 it has been the back hatch. It can be difficult to track down the source of a leak. Kayak manufacturers do a pressure test. They use a hatch cover with a car tyre valve in it then pump some air in and soak the outside of the kayak with soapy water and look for the bubbles.

I have found the leak it is most often where the skeg cable enters the top of the skeg box in the rear hatch followed by where the holes are drilled for the end toggles in the front or rear hatches.

You can test the end holes by upending the kayak with the leaky hatch down. Either lean the kayak against a high wall or get someone strong to help )and it is best not to do this in a wind!) Fill the rear compartment with a decent amount of water from a hose and look very carefully for leaks. In my case all was dry so... 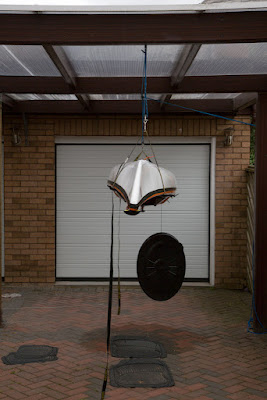 ...I hung the kayak upside down and lifted it up to about shoulder height. (I also use these pulleys under the carport to raise and lower the kayak off and on my car roof rack.) I then poured a jug of water into the skeg box. Water started to run down the inside of the cable and dripped out at the control end of the cable by the cockpit. But I was more interested in what... 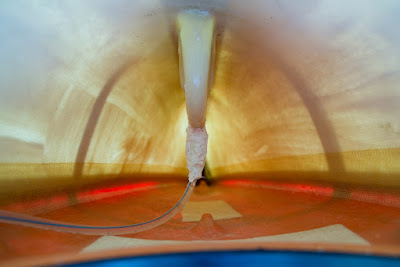 ...was happening inside the hatch. It was quite easy to stick my head in and have a look. (If your kayak has a small rear hatch you may need to use a mirror.) It turned out as I expected, there was a steady drip coming from where the cable entered the skeg box. My Valley Nordkapp LV also developed a leak here and it was returned to the factory and came back with a GRP bandage round the skeg cable and skeg box. That fixed the problem but the kayak was away for two weeks.

This time I wanted a quick repair. I could have used GRP but instead, I smeared Evo-stik Serious Stuff Ultra adhesive round where the cable enters the skeg box. This product is waterproof and even sticks to wet surfaces. It is much cheaper than Sikaflex 291 sold by chandlers and is just as effective. (£5.98 for 290ml out of Tesco compared with £12.95 out of Duncan). 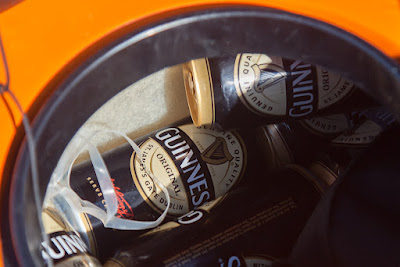 I now have a dry kayak.
Posted by Douglas Wilcox at 7:00 am 2 comments: