A tale of a Queen, a Saint and a Lord on Inchmarnock. 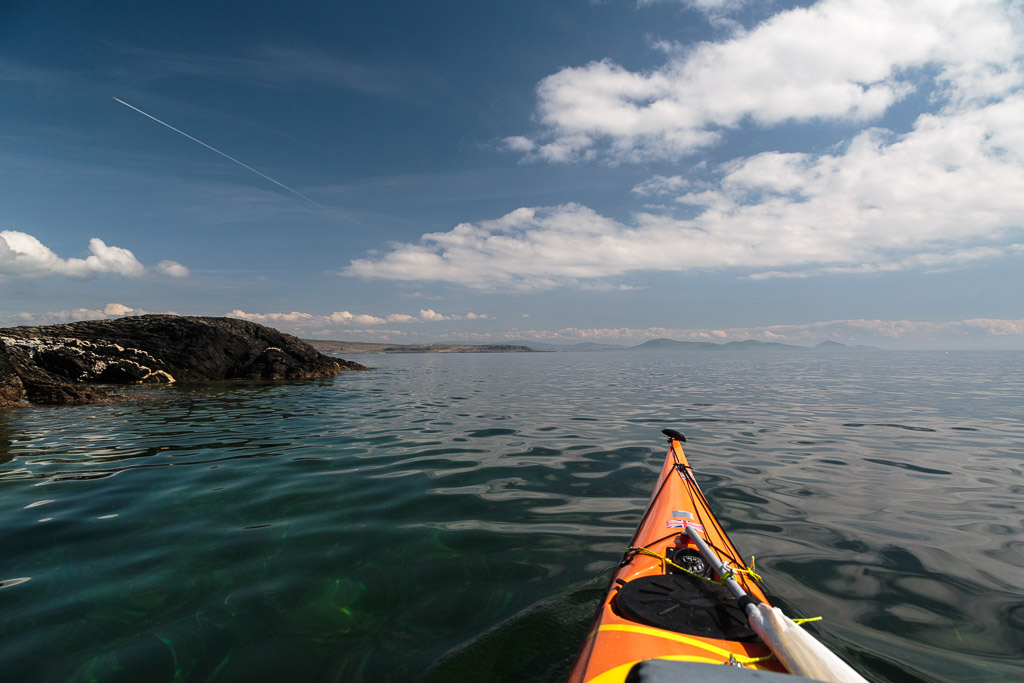 Our voyage now took us north where we entered the sheltered Inchmarnock Sound which separates the lovely isle of Inchmarnock from the larger island of Bute. Inchmarnock means isle of St Marnock who was a seventh century Christian missionary ( he also had churches named after him at Kilmarnock or Cille Marnock and elsewhere  in Scotland). After his death, St Marnock's head was frequently carried in procession to ensure good weather for harvests etc. (I do hope he did not die from decapitation.) Long before Marnock's day it was also home to the Queen of the Inch. We planned to pass her burial spot later. 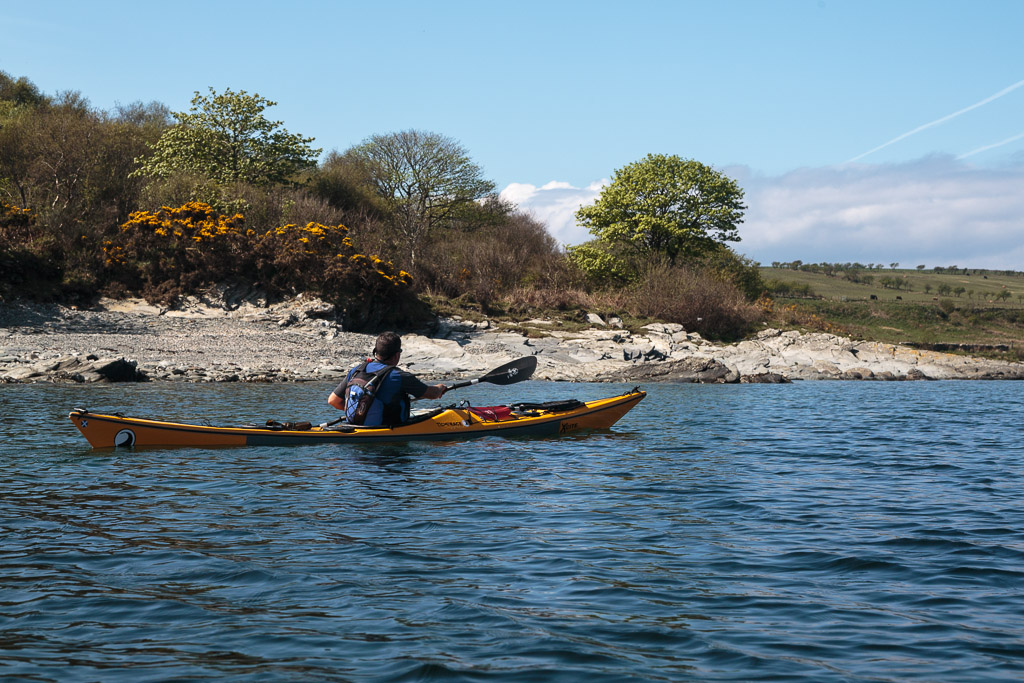 As we would now be paddling in sheltered coastal waters, we had ditched the dry suits and were now much more comfortable. The east coast of Inchmarnock is less rugged and more fertile than its wilder west coast. It is said that people suffering from alcohol problems from Bute were once marooned here as there was no pub on the island (as you will have  read previously, we made judicious provisioning and brought our own supplies). 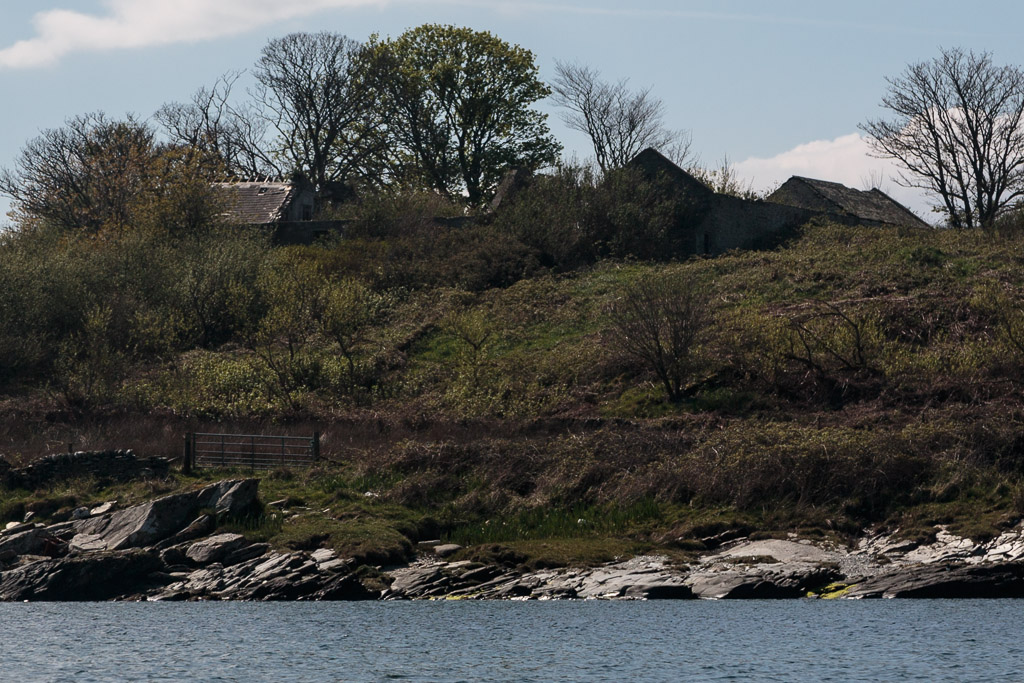 Soon we passed below the sad ruins of the deserted Mid Park farm buildings and... 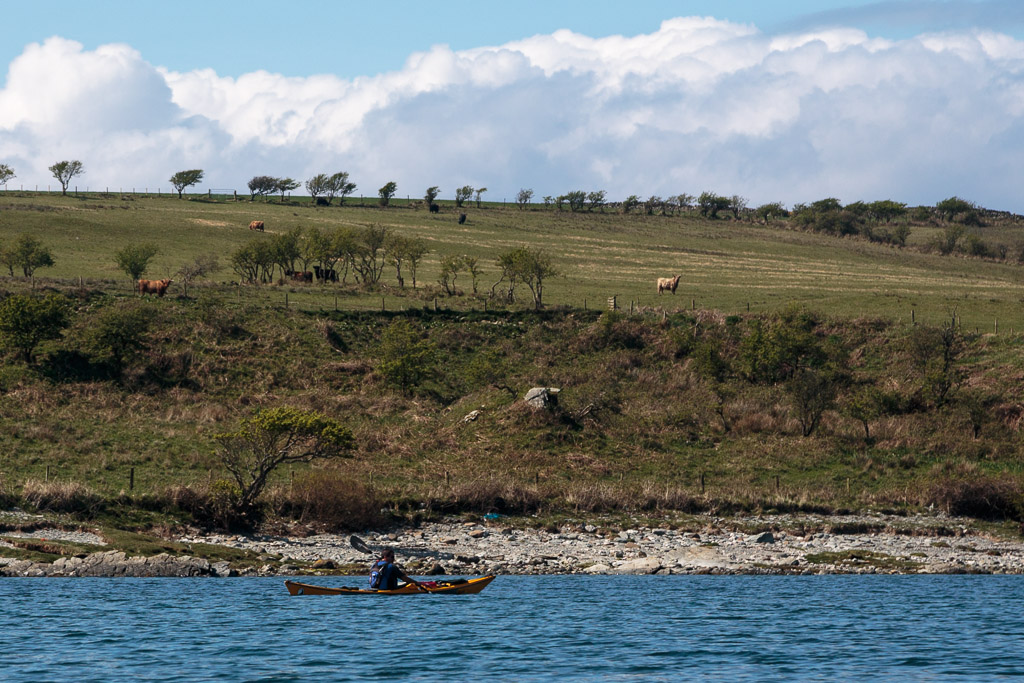 ...its still fertile fields. Although Inchmarnock has not had a resident population for many years, it was bought in 1999 by Robert Smith, the Rt. Hon. The Lord Smith of Kelvin, KT, Kt. He introduced a herd of pedigree highland cattle which are farmed organically. 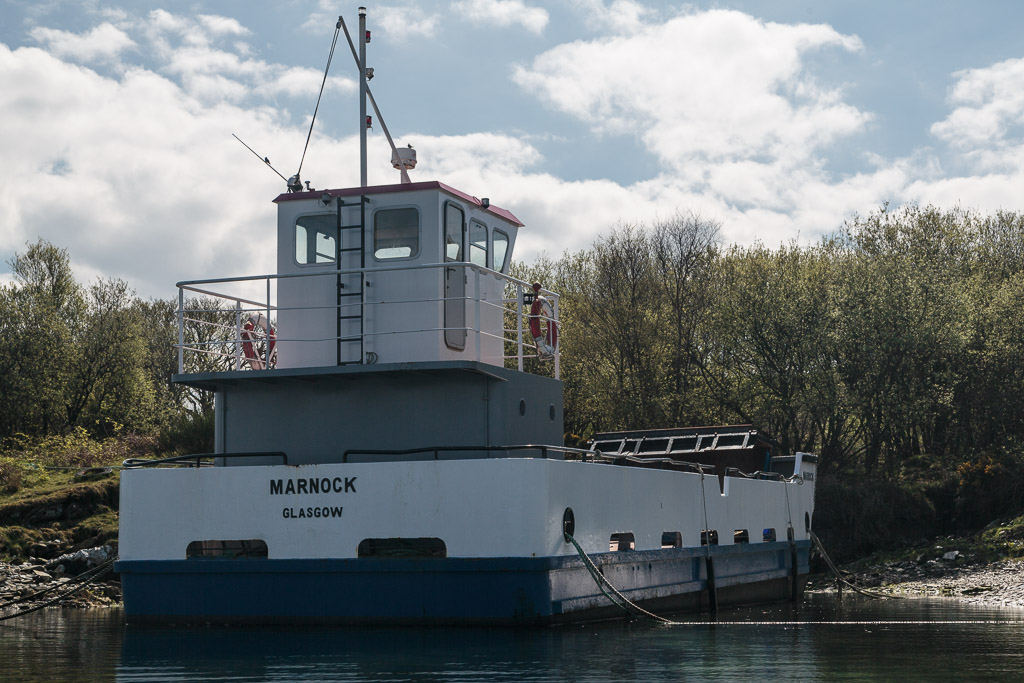 A little north of Mid Park, we came to the new landing place, where the MV Marnock was moored. Lord Smith commissioned her from the Ardmaleish boatyard on the neighbouring island of Bute. Her main task is related to the island's farm. As I approached I heard a chif chaff's distinctive call. I was rather surprised to see it perched on one of the Marnock's aerials. Although you often hear chiff chaffs, you seldom see them in the open, they prefer to flit unseen through the leaf canopy in woodland. 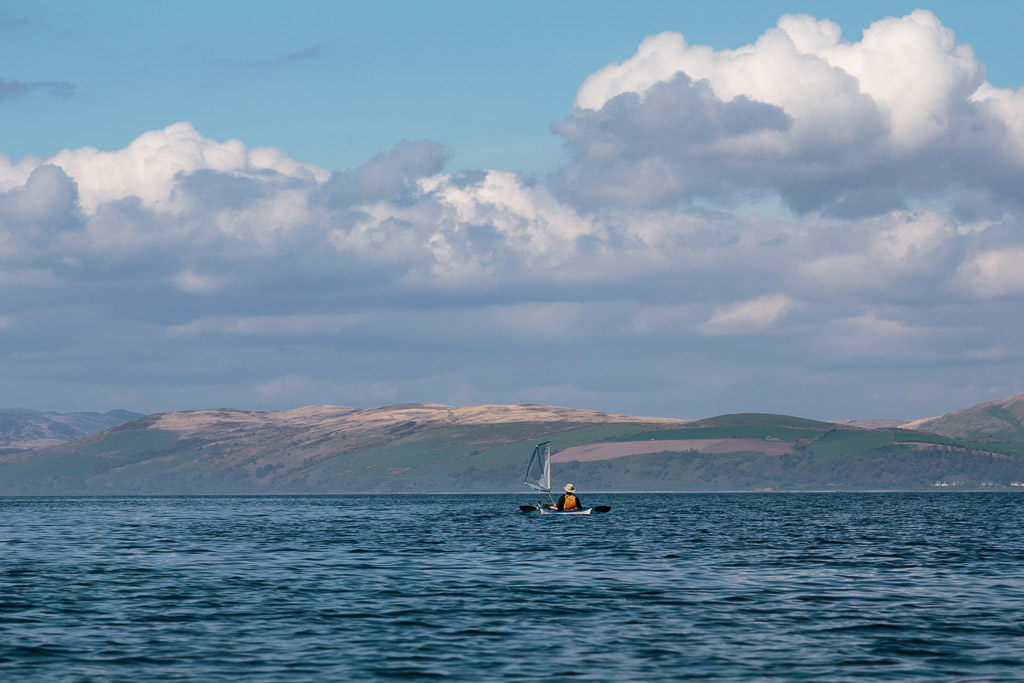 A little breeze got up and Mike and I put our sails up but Ian was not left behind as... 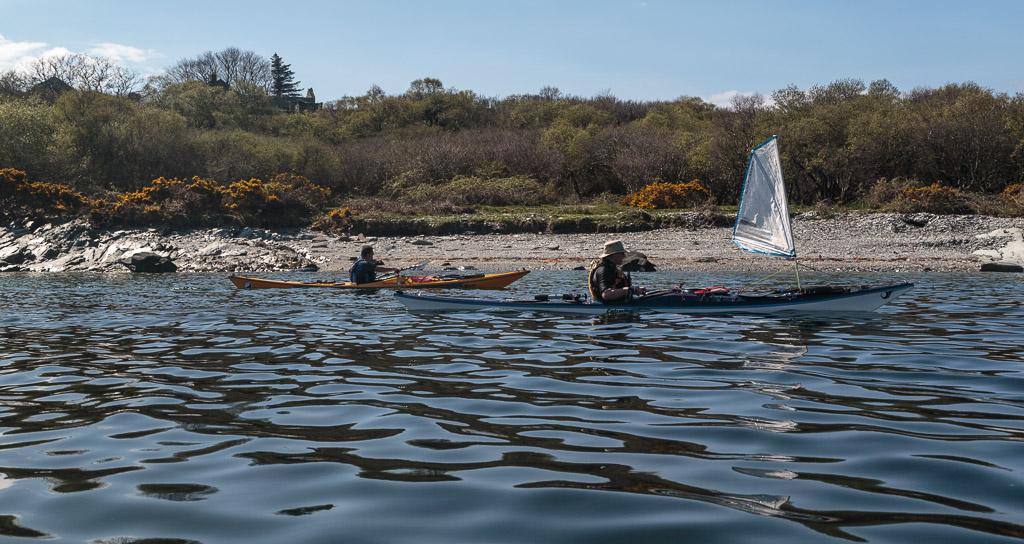 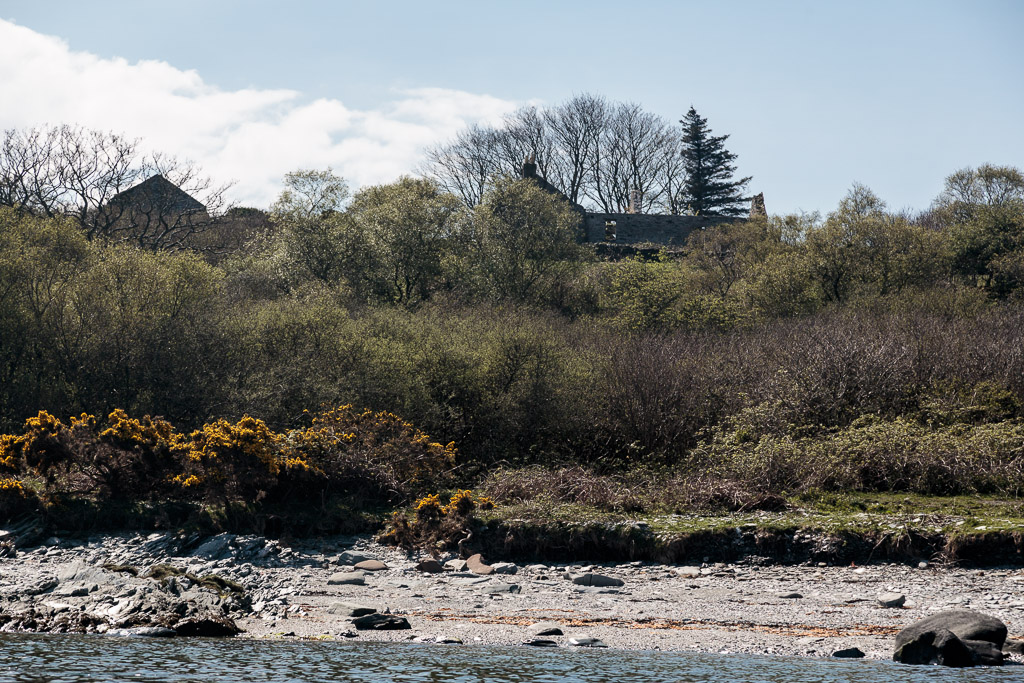 All too soon we neared the north of the isle and spotted the remains of North Park farm above the yellow gorse bushes by the shore. At the north end of Inchmarnock there is a large colony of common seals. They like to haul out near the shingle beach... 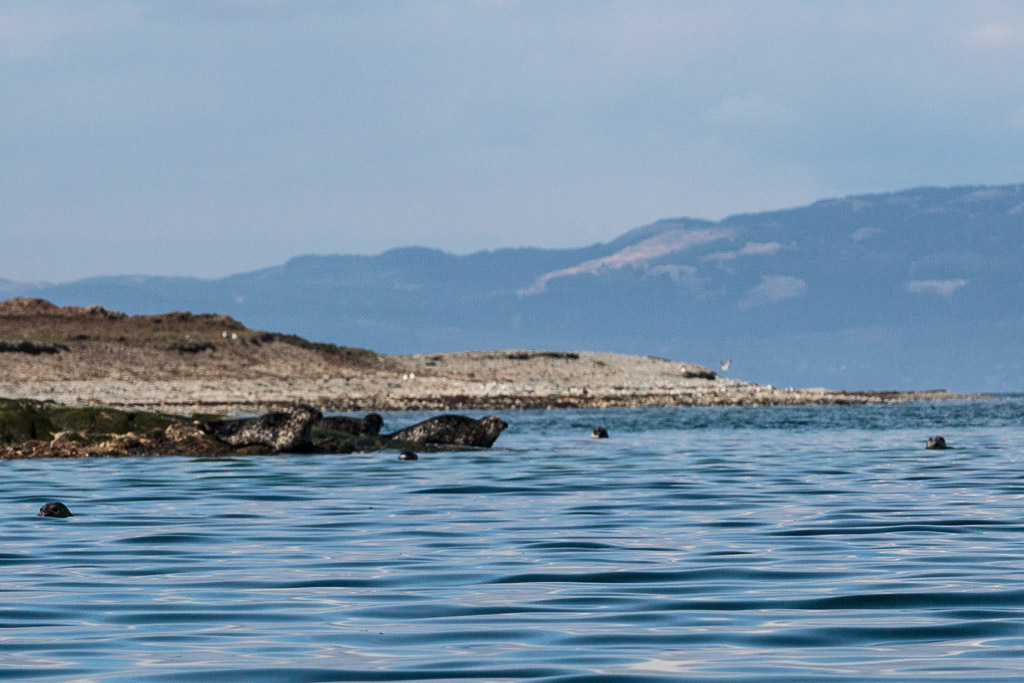 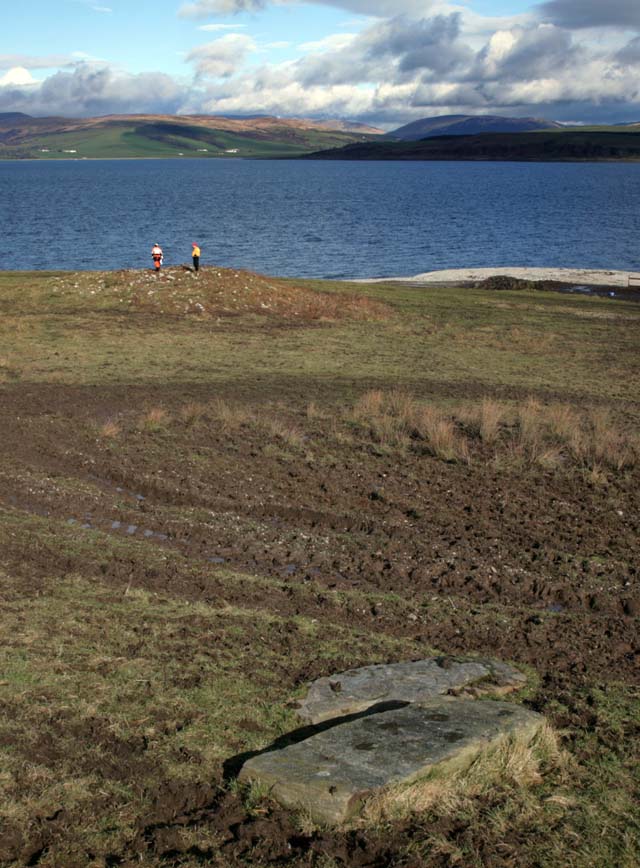 ...the Queen of the Inch were discovered in a stone cist. The above photo of the cist was taken in 2007 when the disinterred Queen's remains were being studied by archaeologists from Headland Archaeology. I contacted Inchmarnock Estate by email, asking for more information. Lord Smith himself  kindly phoned back and explained that he intended to have her remains re-interred on the island, which subsequently happened in 2010. I enjoyed a fascinating hour talking to Lord Smith about the history of Inchmarnock. He has a deep interest in the island and funded an archaeological dig by Headland Archaeology. Their results were published in 2008.

For the full StereoVision experience see Ian's account here.
Posted by Douglas Wilcox at 9:01 am No comments: