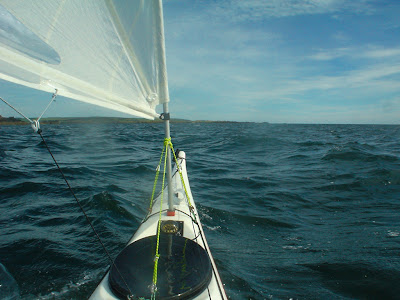 Paddle sailing is a particularly satisfying aspect of sea kayaking and down wind you can hit speeds of over 20km/hr and frequently overtake the waves in front. Downwind the deployed skeg is very helpful to being able to paddle sail at maximum speed as you are not having to waste energy with steering paddle strokes. Most sea kayaks are fitted with plastic skegs of varying stiffness and form. Most are parallel sided with just a token rounding at the trailing and leading edges. Skegs like this are adequate for controlling weather cocking at normal paddling speeds of 5 to 8km/hr. However, at greater speeds I have found that some skegs hum, some seem to have little effect and some suddenly loose grip. 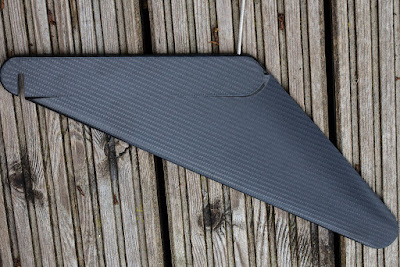 So it was with great interest that I read of Norbert Gancarz and his beautiful carbon fibre skegs with an aerofoil section. Norbert knew I had a Valley Nordkapp LV and he contacted me to see if I would be interested in trying one of his skegs out. I jumped at the chance (metaphorically speaking, with knees like mine I don't jump!) 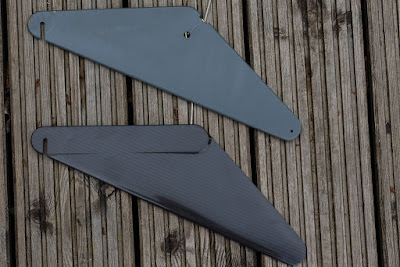 In comparison, the Valley skeg is just a flat piece of plastic. The Valley skeg is pretty low aspect and as it is made of thick plastic, I don't think the standard one will bend much anyway. However, what I would really like to see is Norbert making a high aspect skeg to replace the P&H one, which I think is too flexible. P&H kayaks like the Delphin and Aries have proved to be outstanding for paddle sailing and I think they are crying out  for a stiffer skeg. Over to you Norbert....

Norbert's skeg has a similar outline to the standard Valley skeg but has a beautiful aerofoil shape and the standard of finish is stunning. I was very frustrated after I had fitted the skeg because further knee problems restricted my ability to paddle but after some highly successful physiotherapy following my last encounter with the orthopaedic knee surgeon I have taken to the water again (albeit maybe not for long as I have to see the shoulder surgeon next Wednesday and the knee surgeon in six weeks!) 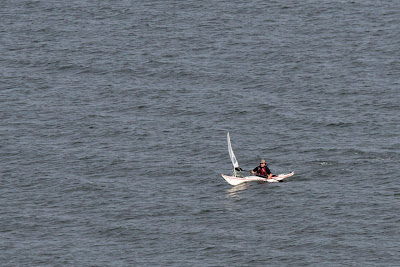 On the water Norbert's skeg adjusted very easily, felt very positive and did not hum even at speed. When paddle sailing, the course could be adjusted with even a small movement of the skeg. Later in the summer I will be able to do back to back tests with another diolen Nordkapp LV (though sadly this does not have sail fittings) monitoring speed with a GPS. 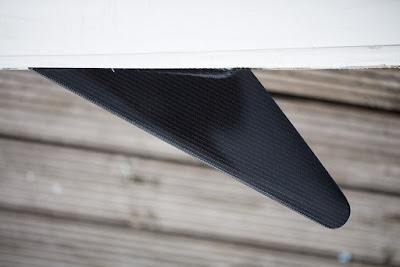 Although I think Norbert's skeg feels more positive when paddle sailing, to be honest, I am not convinced it is much faster. However, if it prevents even one broach, you will be at least 100m ahead of your broached pal. Anyway what would you rather have hanging down from the stern, this beautiful skeg or a lump of grey plastic?

Any problems? Well when carbon fibre skegs started to appear on windsurfers there was a spate of torn out fin boxes as the existing design could not cope with the high lateral load of a fully powered up windsurfer travelling at high speed and a stiff unforgiving skeg. (In windsurfing you are balancing the full force of the sail by driving the force to the board through your feet. A great deal of the load goes through the back foot, which is usually very close (fore and aft) to the skeg.)

I don't think this will be a problem for sea kayak skeg boxes such as those made in the UK or the Cobra factory in Thailand as sea kayak skegs are much smaller and the speeds are much less than in windsurfing.

I can see that paddle sailors would be a market for skegs such as these. Also those people who buy carbon kevlar kayaks with beautiful clear hulls would surely love to have a matching skeg. I suggest Norbert contacts Valley!

I wish Norbert every success and if you would like to buy a carbon fibre Valley skeg you can contact Norbert on norbertga@o2.pl .