The fishermen of Kirkcudbright Harbour 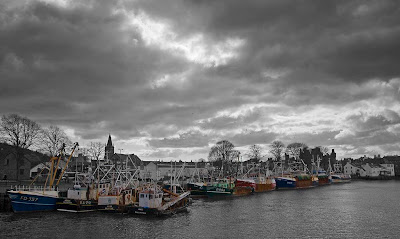 The fishing fleet is in, bringing colour to Kirkcudbright Harbour.

Like Maidens, Kirkcudbright's fishing fleet declined during the first half of the 20th century. Then in the late 1950's a revival started after local man, John King, started lobster and scallop fishing. Gradually the number and size of the boats increased and construction changed from wood to steel. Today there is only one traditional wooden Scottish boat left. She is the "Fredwood" on the extreme right of the photograph. Most of the boats are scallop dredgers but "Argo", the small boat in the foreground, is a cockle dredger. One of the biggest boats is the blue boat, third from the right. She is the "King Explorer" and is part of the John King fleet.

All this has come at a cost, in 1985 the "Mhari-L" was lost with all 5 hands. Then in 2000 the "Solway Harvester" was lost with all 7 hands. Both vessels were lost in the Irish sea between Galloway and the Isle of Man. On their way to the boats, fishermen walk past a memorial dedicated to the women and children of this and other Galloway fishing communities who have lost their menfolk.