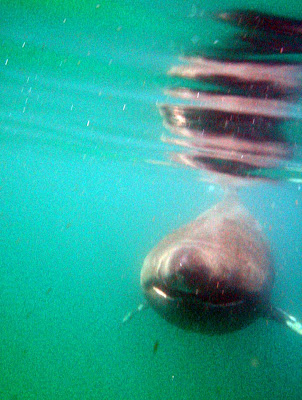 At this time of year basking sharks frequent the waters of 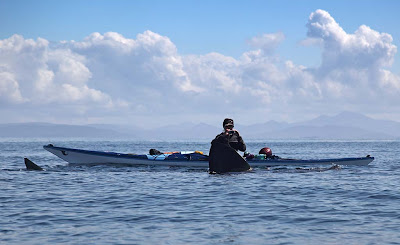 ..the west coast of Scotland such as here in Gunna Sound, between Coll and Tiree. Indeed the Shark Trust  blog has recently reported a flotilla of approximately 52 basking sharks off Hynish on Tiree.

The Shark Trust have just produced a Code of Conduct for kayakers who come across basking sharks. You can download the full size pdf file here.

Never paddle your kayak directly towards the sharks or allow
several kayaks to surround them, as such actions will probably
frighten them and make them dive or act unpredictably. Stay in
a group, rather than stringing out around the sharks.

Kayakers should not cross the path of the shark so the sharks
can maintain their course without changing direction or speed.

Avoid sudden movements which will disturb the sharks. Never
use your paddle or kayak to touch a shark.

Avoid pairs or large numbers of sharks following each other
closely. This may be courting behaviour and they should not be
disturbed.

Although Basking Sharks are filter-feeders and mostly placid,
they can startle if disturbed, often thrashing their tail with
enormous power. Also be aware that Basking Sharks do breach.

Sharks appear attracted to kayaks and often swim alongside
and below, very close to the hulls. If you stay calm, still, and
observe, there is a good chance they will come to you.

I recently wrote an article for Ocean Paddler magazine entitled "Close encounters... of a marine kind." (This was not my photo! It was taken by Linda Pitkin, a specialist underwater photographer.) I discussed basking sharks and how to avoid disturbing them in the article, which you can download in pdf form here.

The Shark Trust have a basking shark project and would welcome any sighting reports especially when accompanied by photos but remember to switch the flash off, if you use the camera underwater!