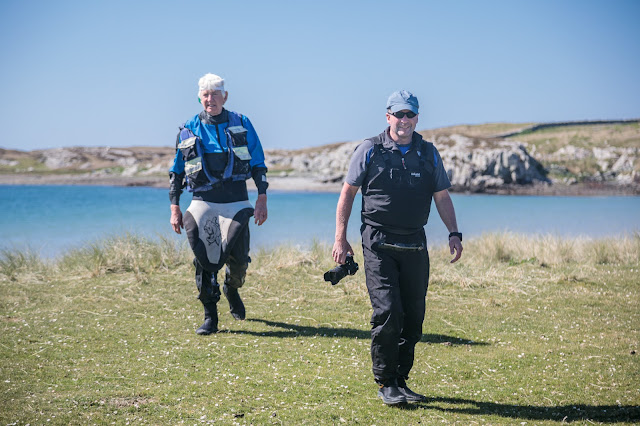 As we made our way up from the beach  David had a spring in his step which was quite unlike thast of his first visit some years ago. I had told him that we were going to visit the Priory. He visibly paled before he said "Is that wise? They'll never let us out, we'll need to go into rehab and walk the twelve steps!"

As we made our way over the machair towards... 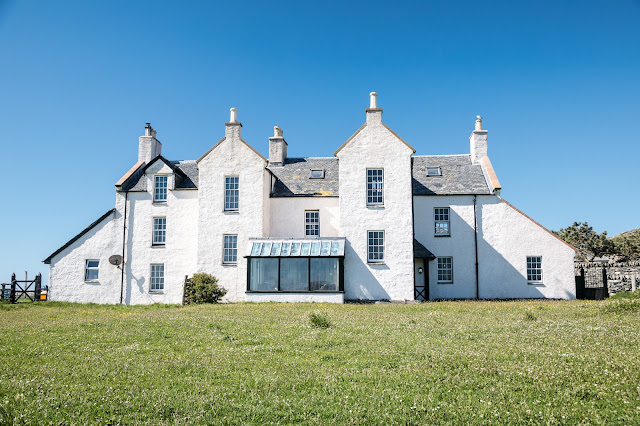 ...Oronsay House we were intercepted by the RSPB warden. Straight away I asked how his nettle patches were growing? He then knew that we were aware that Oronsay was an important reserve for corncrakes. He told us that there were presently three calling males on the island but unfortunately we did not hear them on our visit. Another reason the wardens rush up to meet visiting sea kayakers is that they do not want you to camp on the island. My friend Tony stood his ground when approached by a previous warden several years ago. He was camped on the east of the island well away from areas used by corncrakes and choughs, which are the species the RSPB is most interested in.

Under the terms of the Land Reform Act (Scotland) you can visit and camp on Oronsay provided you avoid disturbing the birds (or other wildlife). The RSPB website still encourages visitors to visit their other reserve Loch Gruinart on Islay instead: "This site is one of several that due to its size, location and/or conservation sensitivity is not capable of accommodating large numbers of visitors (unless stated). Where possible, we have indicated the nearest equivalent RSPB nature reserve (Loch Gruinart) suitable for visiting."

Fortunately, they now have a rider at the bottom of the page which recognises your legal right to access the island: "This does not affect any statutory rights of access under the Countryside and Rights of Way Act or Land Reform (Scotland) Act legislation".

I joined the RSPB in 1973 when I started work as a ranger/naturalist with the National Trust for Scotland. Although I was a member for several decades, I left when it became clear their aim was to restrict public access to their reserve land.

Anyway the RSPB do not own Oronsay. The island belongs to a delightful American lady, Mrs Colburn, who we have found to be most welcoming of visitors. Indeed on our last visit we met her on the beach and helped her clear up plastic flotsam and jetsam.

As we passed her lovely house on the way to the Priory she waved to us from the window. 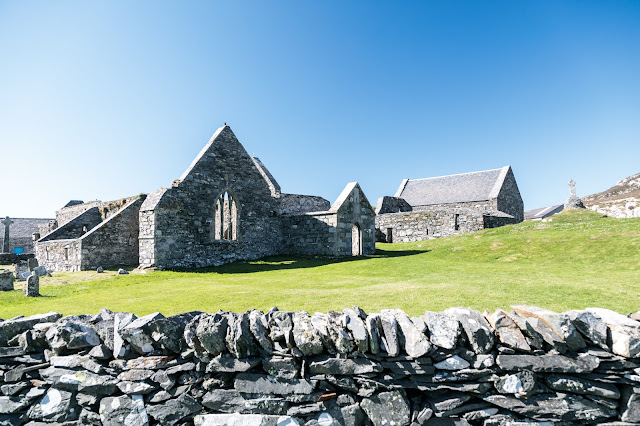 Oronsay Priory is situated where the machair abuts the foot of a rocky crag (where you maybe lucky and see choughs). A deep sense of peace pervades this place and it is no wonder that a religious settlement was set up here, far from the turmoil, violence, warfare and lawlessness that plagued most of Scotland throughout the Dark Ages and Mediaeval Times.  These buildings date from the mid 1300's but there may have been a chapel here since St Columba's time. The Priory was founded by the Lords of the Isles and became a centre for religious sculpture until about 1500. 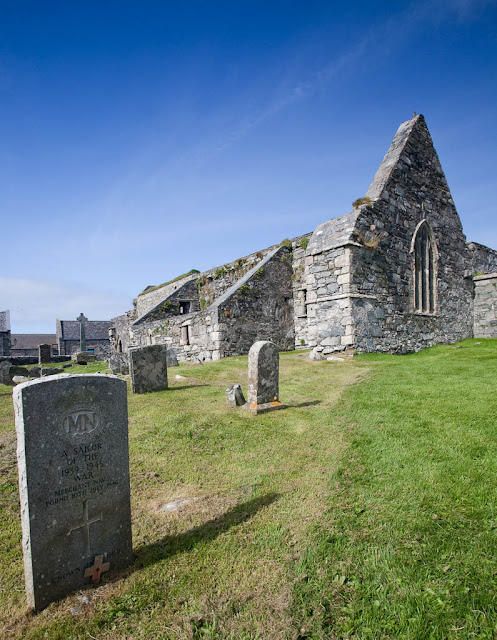 The sandy machair soil of Oronsay lent itself to easy grave digging and there were no wolves on Oronsay to dig up recently buried corpses. So Oronsay became both a place of religious pilgrimage and a final resting place.  Many of those interred here were former pilgrims or residents of Argyll on the mainland or like this recent grave, drowned sailors whose bodies were washed ashore. You can read more about some interesting graves on Oronsay in this post from our previous visit.

Some say St Oran gave his name to Oronsay but I rather doubt this as Oronsay is quite a common name for tidal islands on the west coast. It comes from the Old Norse and means "island of the ebb tide" which is exactly what Oronsay is. You can walk to it from neighbouring Colonsay at low tide. 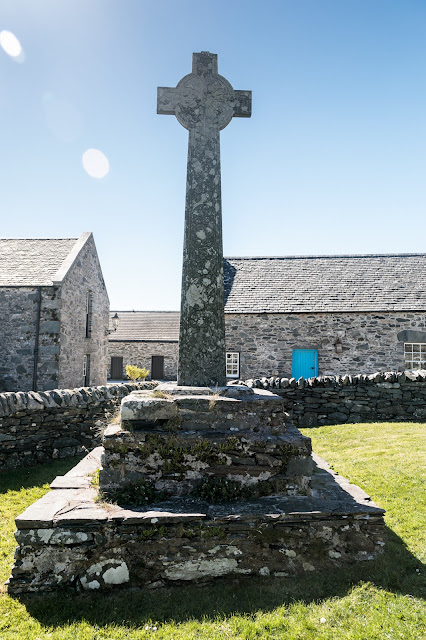 Undoubtedly the most impressive features of the graveyard are its two standing crosses. This is the Great Cross of Oronsay, which stands inconspicuously against the farm buildings at the back of the Priory graveyard. It is finely carved on both sides and is thought to have come from Iona. 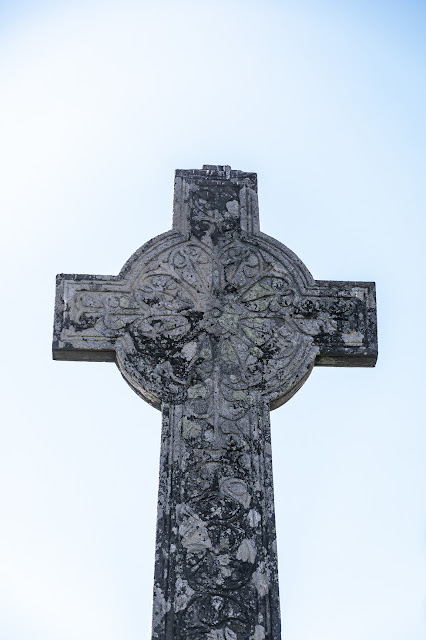 Although it has withstood over 5 centuries of weathering, you can still see how finely the east face of the cross was carved. 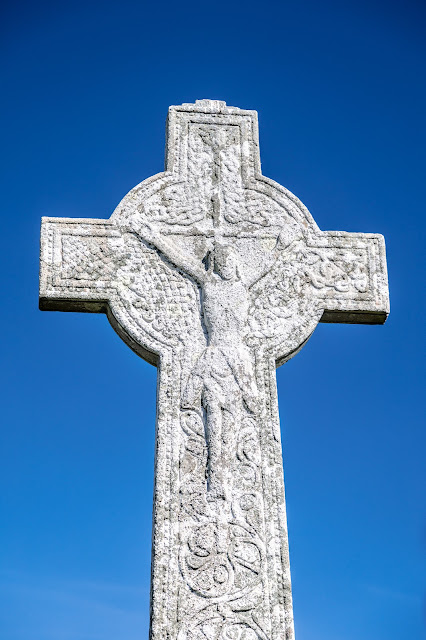 The west face of the cross is also finely carved and at... 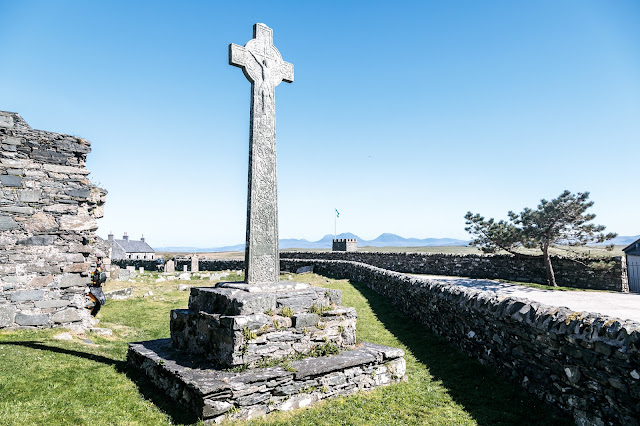 ...its base is a Latin inscription. It was carved for Malcolm MacDuffie, the Lord of Colonsay, some time after 1472 and erected before 1500. 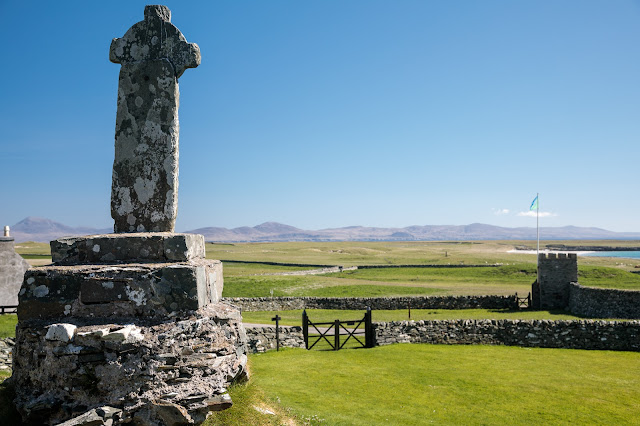 Another interesting, but older, cross stands on a little knoll to the east of the Priory. In 1881 just the shaft was standing and the present head of the cross lay on the ground beside it. 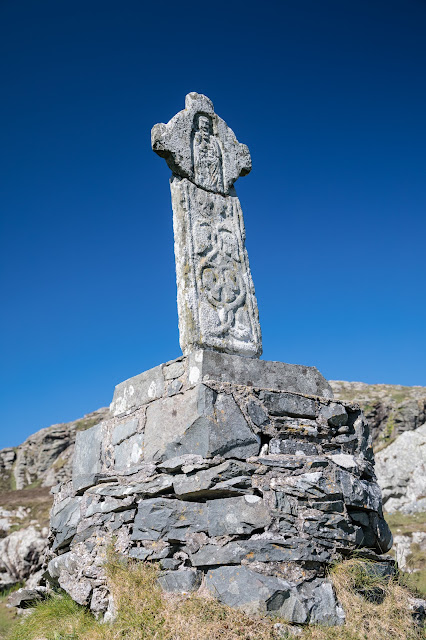 There is some doubt as to whether this is the original head of the cross but it has now been replaced atop the shaft. 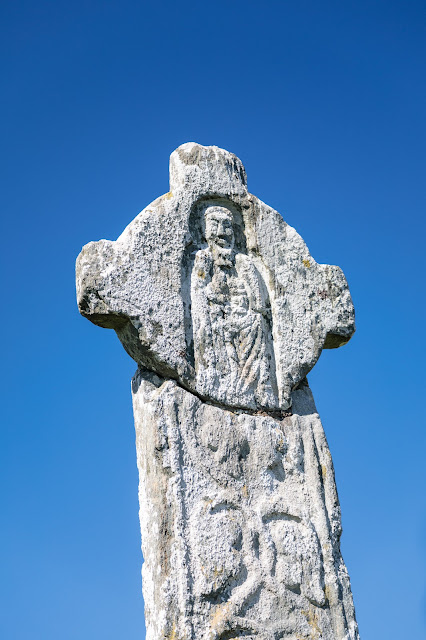 It is decorated by a rather portly and smiling figure. Perhaps life was good here when the cross was carved. 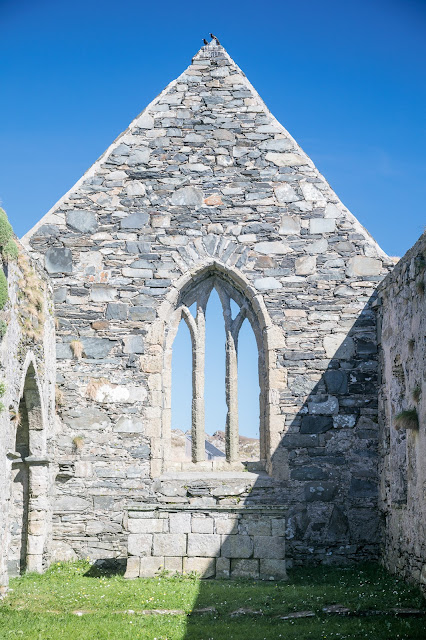 The Priory is one of the best preserved medieval religious buildings in Scotland. It was too remote to be destroyed in the Reformation, as were many of its more accessible, contemporary religious buildings. We entered the interior of the Priory to find ourselves in a...

...cloistered courtyard. Someone was lying in peaceful contemplation... 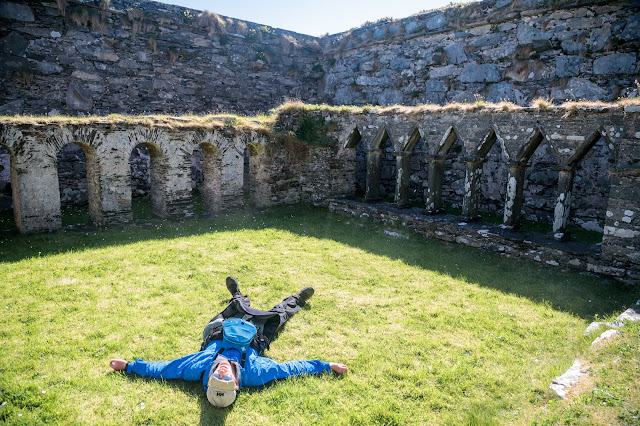 ...it turned out to be Sam who, without a sail, must have been quite exhausted keeping up with the paddle sailors who had enjoyed a fair wind on the long crossing from Jura. 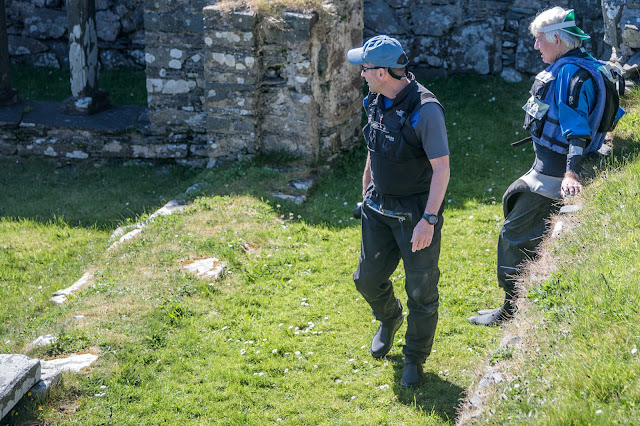 Like pilgrims of old, I think all of us particularly appreciated our visit to this special place because of the effort it had taken to get here. We left Sam to his well deserved rest and made our way to the back door of the Priory which... 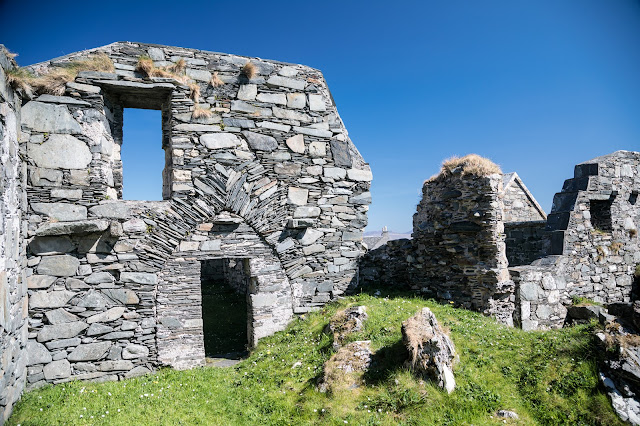 ...to David's great relief was not locked.

As we made our way back into the graveyard we passed below... 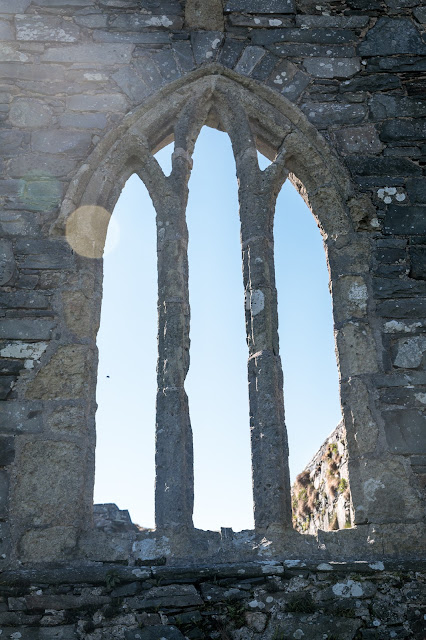 ..the great east window of the chapel which must have been magnificent when it was filled with stained glass.

As we took our final steps at the end of our personal pilgrimage to the Priory on Oronsay we reflected on those who had led their lives here and kept human decency, hope and faith alive through the darkest centuries of Scotland's bloody past. Whether or not you are Christian, or even of any religious persuasion, I suspect that if you ever visit this place, you would set off on your road home inspired to help in your own way to make the World a better and more peaceful place for all its inhabitants.

Far from the Peace of Oronsay and away to the east, beyond the Paps of Jura, lie the lands that inspired Christianity, Judaism and Islam. It is a sad paradox that many lives in those lands that were at one time the cradle of civilisation are currently blighted by senseless violence and destruction.

You can read Ian's account here.
Posted by Douglas Wilcox at 5:29 pm 4 comments: