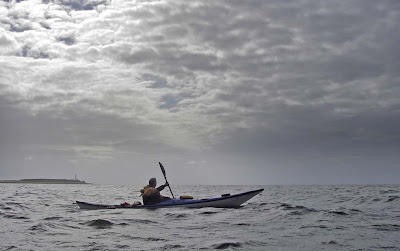 Paddling round Pladda was hard work. The staff of seakayakphoto.com are not hardened athletes, with the stamina for great ocean crossings or circumnavigations of continents. Tony and I are exponents of the gentler activity of "sea kayaking lite". It was now 1210 and I had been up since 4am to drive 85 miles from the Solway to Ardrossan to catch the 7am ferry to Arran.

I was feeling a bit tired. On the ferry I had intended to breakfast on porridge but the chap in front of me was cyclist with not a hint of excess flesh to strain his Lycra. He ordered porridge. I thought to myself, I am not a cyclist, I am a hardened sea kayaker! Sea kayakers eat big breakfasts, so I ordered the full trucker's special, all 4,500 calories of it.

I was just thinking that a little rest might be a good idea when all of a sudden Tony cried "Tha pathadh searb orm!" That took my mind off my black pudding which was still somewhere high above my diaphragm. I knew things must be pretty serious. Tony has little of the Gaelic and its use is limited to situations in extremis. 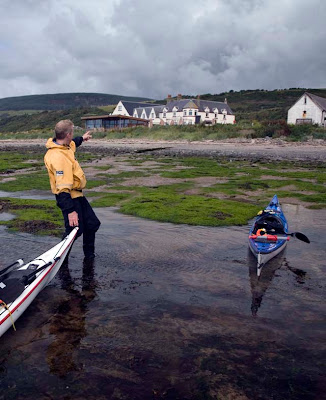 Seconds later we found ourselves ashore by the prominent white building, which we had been using as a transit mark to cross the seething tides of the Sound of Pladda. 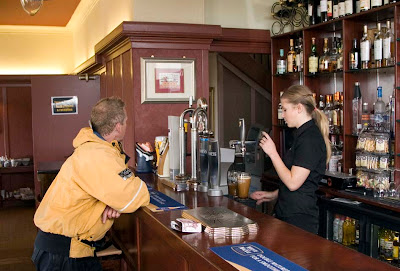 No one could have been more surprised than we two, to discover it was the Kildonan Hotel, complete with pub and sea food restaurant. Our paddling wear proved no barrier to admission. The efficient and polite East European staff not only poured our pints of ice cold Guinness but invited us to be seated till the heads had settled. They then carried our refreshments to the table after the glasses had been topped up to the brim. 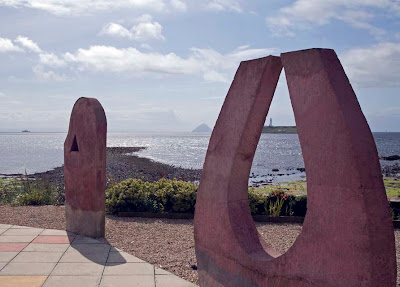 The hotel has recently been refurbished. The formal restaurant is within the modern timber and glass extension at the front of the hotel and is named "The Stone Garden" after this part of the hotel grounds.

Oh, in case you have less of the Gaelic than either Tony or myself, "Tha pathadh searb orm!" may be loosely translated as: "There is a bitter thirst on me!"

Health warning: in the UK, bags of peanuts now carry this message: "Warning this product may contain nuts." In the same vein, be warned that the consumption of alcohol while sea kayaking may seriously risk your own and others' well being and safety.