SECURITE on the Solway. 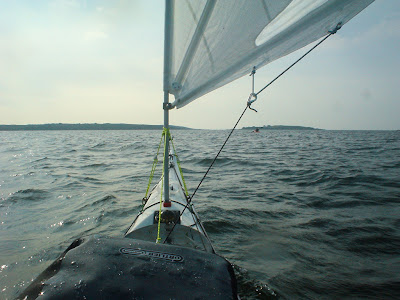 It was a neap tide down on the Solway. There was no time to waste as this meant that the tide would soon be out, exposing the sands of Fleet Bay for most of the day...

...so Tony, Jennifer and I set off early to catch the the ebb tide before the bay emptied. We planned to stay out on the open Solway for about 6-8 hours until the flood filled the Fleet again. A force three NE wind sped us on our way as we crossed the tidal bar that connects Ardwall Isle to the mainland and... 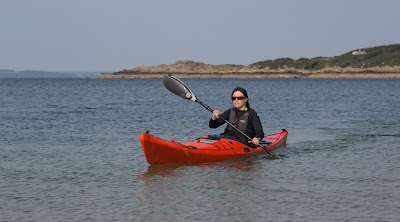 ...made our way out towards Barlocco reef beyond. 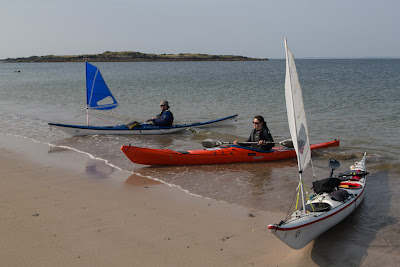 We took a break on Knockbrex beach for our first luncheon. Jennifer did well in the Delphin to keep up with the kayak sailors. We did not stay long as the reef that connects Barlocco to the mainland was rapidly drying. 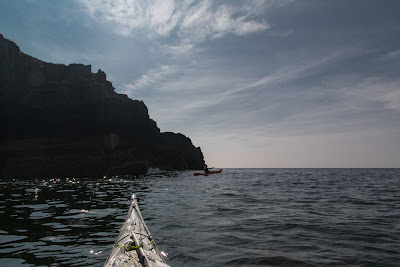 As we approached Meikle Pinnacle Jennifer pointed out a flock of gannets diving on a shoal of fish. 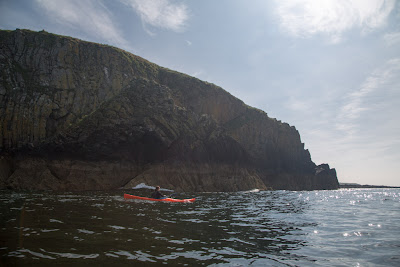 The swell began to increase as we rounded Ringdoo Point. We had planned to paddle round to Kirkudbright Bay as we should have been in the lee of the land in the forecast 3-4 NE winds. The winds were due to veer SE and increase in the evening so we should have had plenty of time to get there and back. 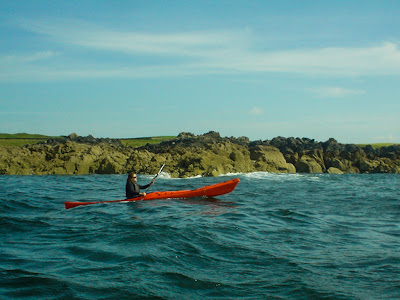 As we left the shelter of Wigtown Bay the wind increased and veered SE and the swell began to increase. The ebb tide runs to the SE out of Wigtown Bay but as you approach the entrance it joins the ebb from the Solway which runs to the west. We were therefore paddling in glorious sunny wind with tide conditions with nice smooth swell.

All of a sudden the VHF crackled into life "SECURITE,  SECURITE ,  SECURITE ." It was Liverpool Coastguard with a strong wind warning for small craft.. Winds were to veer to the SE and increase to force 6 imminently. This put us in a difficult position. Imminent means within 6 hours but the wind had already veered and increased and we were enjoying ourselves now. However, the tide would turn and start running east long before we would get back from Kircudbright Bay. Wind against tide in the shallow waters of the Solway creates the "White Steeds of the Solway" which are best avoided so we decided to
turn back towards... 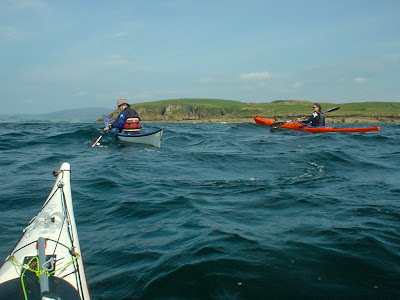 ...the now distant Ringdoo Point. We made rapid progress towards... 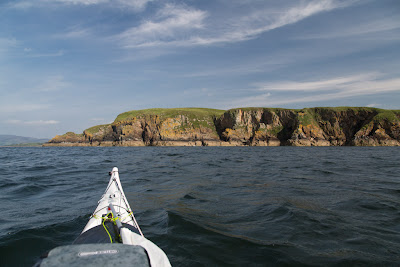 ...the point in the following seas. 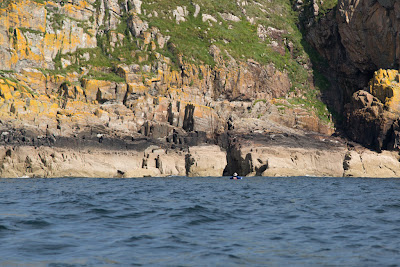 Soon we were in the shelter of the cliffs and all appeared to be calm again. 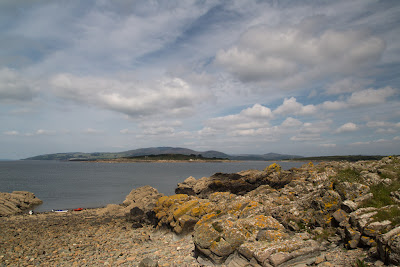 We paddled round the seaward side of Barlocco and landed in a sheltered cove on its lee side. We arrived at low water so we had plenty of time for a leisurely second luncheon until the tide came in sufficiently to kayak back into Fleet Bay. It was a different world in here as we sat in the shelter of the reef looking towards the Islands of Fleet and the distant Galloway Hills. For a moment we wondered if we had done the right thing in turning back. However, when the tide turned, out at sea the Solway horizon had become very lumpy...
Posted by Douglas Wilcox at 12:47 pm 1 comment: