Incredible day (and night!) in Firth of Clyde 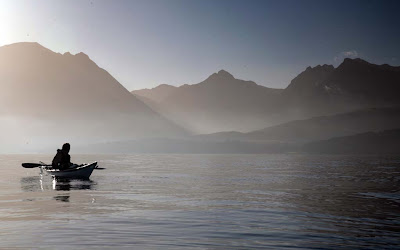 Leaving the beach at the mouth of rugged Glen Sannox at the north east corner of Arran in the Firth of Clyde.

We took the ferry across to Arran with the plan of paddling back to the mainland via the north of Arran, Bute and Little Cumbrae. We reckoned we would have a little twilight paddling. 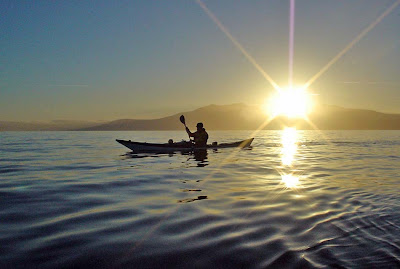 Paddling down the south west corner of Bute towards Garroch Head. 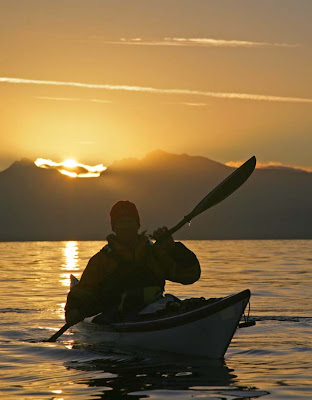 Rounding Garroch Head with the sun setting behind Arran. Still another 10 km to go! 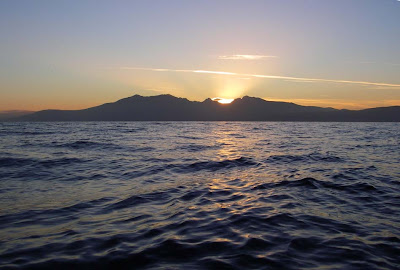 Even in calm conditions, the tidal race of Garroch Head kicks up some movement in the water. 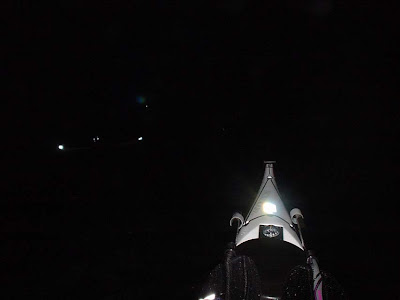 Paddling in the dark across the Hunterston Channel before moon rise.

After sunset a force three wind got up which managed to give some wind against tide turbulence in the channel. This was seat of the pants paddling. The next point of concern was crossing the Hunterston shipping channel. This is only 500m wide but is used by some of the biggest ships in the world. We had bright white lights, flares, stobe light, camera flashes and VHF but common sense tells you that a 300,000 ton bulk carrier is neither going to be able to stop or manoeuvre in a narrow channel, even if it was full daylight. We paddled for the red light that marked the port side of the channel and looked both ways very carefully. Seeing no ships we sprinted straight across to the green bouy on the far side of the channel. The buoys are very useful as you know big ships will do their best to keep between them. The buoys show where you are safe from big ships (but not of course from faster smaller vessels). 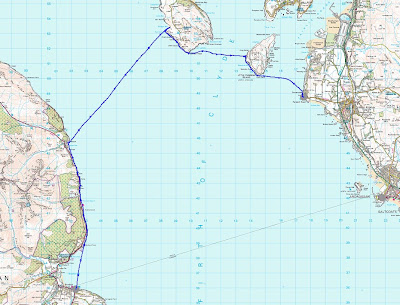 The fog meant the ferry was about 30 minutes later than it should have been and we had to paddle slowly up to Glen Sannox behind the clearing fog. This lost time meant we had more night paddling than we had anticipated. We headed off to Bute (hidden by fog) on a compass bearing and using a GPS way point. Fortunately the fog lifted as we crossed. What a great day!
Posted by Douglas Wilcox at 11:57 pm 11 comments: 
The message below did not make it through to Blogger: 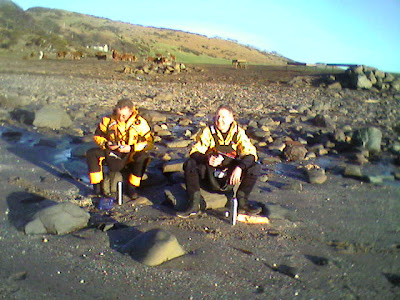 Fog cleared on way over, building up for big sunset and moonrise. 12 km to Portencross
Posted by Douglas Wilcox at 1:45 pm No comments: 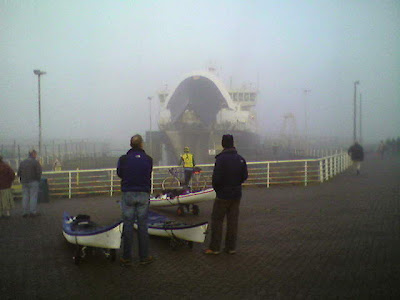 Fog is lifting sun coming through. We will be paddling back in moonlight.
Posted by Douglas Wilcox at 9:26 am 2 comments: