A ship's bell rings down the years. 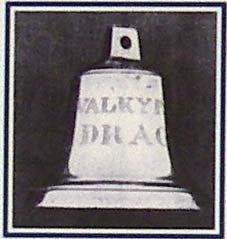 This is the bell of the SS Valkyrian, which was wrecked off Dunure harbour in Ayrshire. I recently posted about the bravery of William "Buckie" Munro and 30 other fishermen from Dunure who bravely rescued all but one of the Vakyrian's crew.

I was absolutely delighted to receive a comment from William Munro, who is a descendant of Buckie Munro. It turns out the bell remained in the possession of his family until 1985! He has very kindly added to and corrected some the information I discovered in Dunure and on the internet. 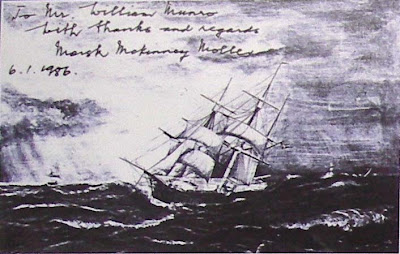 "What is shown in your good account is not a postcard but a painting of the ship which previously was hanging on the wall in Mr Mckinney Maersk Moller's office in Copenhagen. 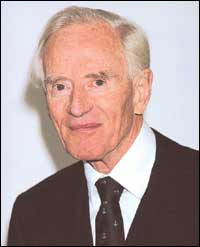 It was presented to me by Mr Moller in December 1985. Thus the date is in fact 1986 on the inscription. It was presented to me as a gift when the bell from the ship (photo in your article)was donated to the Maersk museum in Copenhagen. It had been in the family since the time of the sinking."

What a wonderful story, two families exchanging tokens and mementos of a momentous event which had thrown their ancestors together 102 years before! Of course, if we had paddled from headland to headland, we would have missed Dunure and been none the wiser. This is an important part of the history of this coastline and now thanks to William we have a first hand account of a consequential event. I have corrected and added to my previous posts.