Two iconic, but ultimately impotent, towers on the Clyde 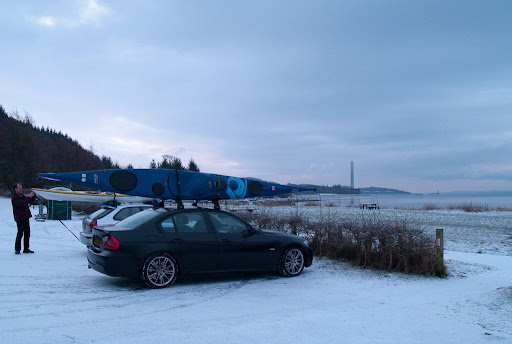 The overnight temperature had gone down to -17C and when I left home it was -10C. It was also snowing and a fresh fall of 4cm lay on top of the snow that has been on the ground since before Christmas. With my bad knee, I have been virtually housebound as I can't walk on the iced pavements. It was with some anticipation that I arranged to go sea kayaking with Jim and Phil. In view of the snow we arranged to paddle locally and met at Lunderston Bay on the Upper Clyde. 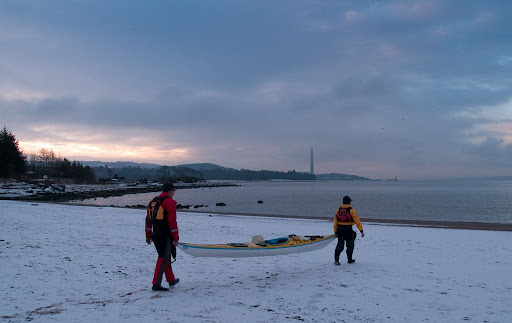 It was a bit of a surprise to find snow on the beach but it was soft and fresh and not hard and icy. Nonetheless, Phil and Jim carried all the kayaks to the water's edge, leaving me in charge of photographic duties. In the distance is the chimney of the disused Inverkip oil fired power station which was built in 1970. It is 236m high and is the tallest man made structure in Scotland. Currently there are plans to demolish it to build 800 houses on the site. It was built at the time of the first World oil crisis and was mothballed except for a brief time during the coal miners' strike of 1984/85. 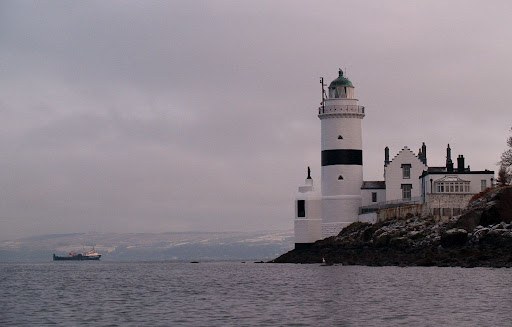 Once on the water we soon passed Cloch lighthouse in the pink light of dawn. This was built in 1797 by James Clarkson with Thomas Smith and Robert Stevenson supplying the lantern and lens mechanism. The present owner of one of the converted lighthouse cottages waved from his conservatory. What a view he must enjoy! 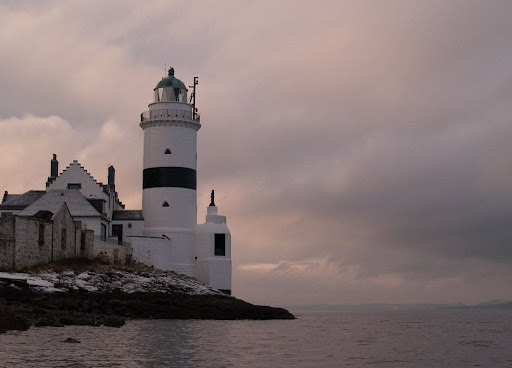 Sadly the magnificent lantern mechanism is no longer in use. It has been replaced by an iron pole with what looks like a 60 watt bulb on top. It still flashes white, once every 3 seconds but as we were to find later, it can hardly be seen from Dunoon, less than 3km away.
Posted by Douglas Wilcox at 3:57 pm 4 comments: