In search of the monkey eating eagle of Rum. 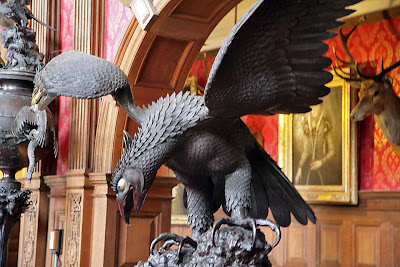 The island of Rum is a rum old place. Most people associate it with the sea eagle but there are other eagles to be found on the island. On one of his trips on his yacht, SY Rhouma, George Bullough visited Japan and became friends with the Emperor. The Emperor gifted him this bronze monkey eating eagle with two matching incense burners, each topped by lesser eagles. George packed them away in a nook somewhere on Rhouma and brought them back to Kinloch Castle as souvenirs of his Far Eastern travels. 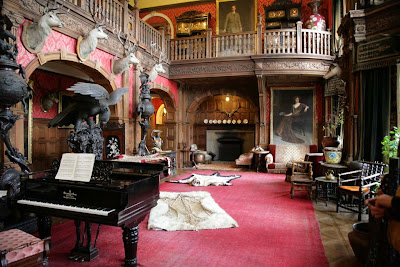 They now fight for attention with his other amazing collection of bric-a-brac and gegaws in the castle's Edwardian front room.

PS several people have emailed asking why I have stopped posting about weekend trips. Unfortunately since I spent some time working in the Children's Hospital in Pakistan I have been bothered by recurrent chest infections. I have not been out for three weekends now and I had to cancel a trip to Skye this weekend. So you will just need to put up with shots from the back catalogue for a little longer. :o)
Posted by Douglas Wilcox at 9:45 am 5 comments: