No room in the bothy and things that might have been... 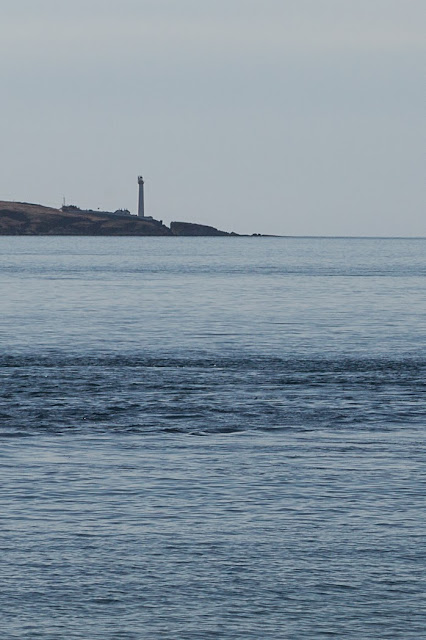 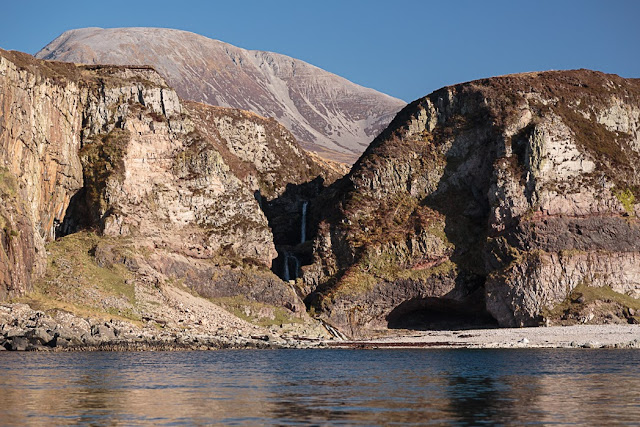 The Jura coast line continued to amaze. At Alt Bun an Eas (burn with the waterfall at its foot) a deep V gorge has been cut through a raised sea cliff. the gorge is too big to have been cut by the current burn and dates from the days after the Ice Age when a huge torrent of meltwater made its way to the sea and the land rose as the weight of the ice sheet diminished.  The gorge has a series of waterfalls and infinity pools just above the beach. 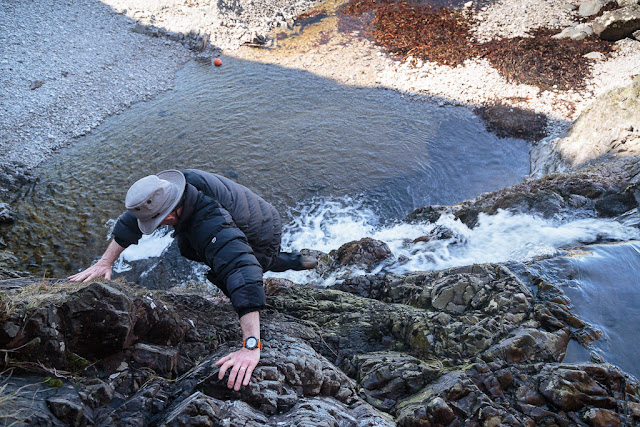 Tony and I climbed up to these pools on a previous visit and Ian and I noted the possibility of a refreshing shower here the next day. 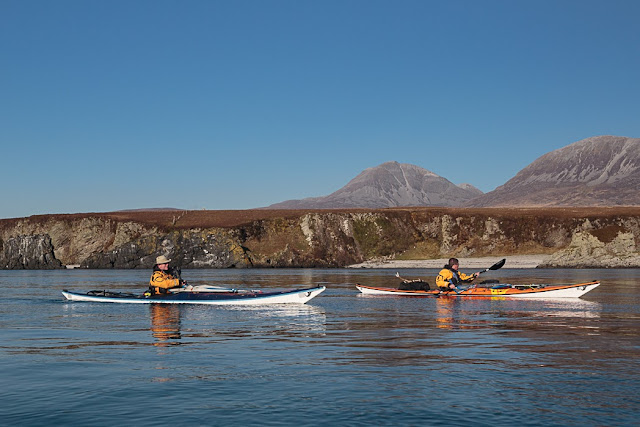 I never tire of this coastline and have paddled it 10 times now. This might not seem that much but considering how hard it is to get here from Glasgow it is a lot!

At first the tide carried us gently down the Sound but the spring rate is 5 knots and...

...soon we were fair zipping along.

The bottom of the Sound of Islay is very clean so despite the speed of the current, there are no overfalls and it only becomes rough if the tide is against the wind (as we would experience the following day!) 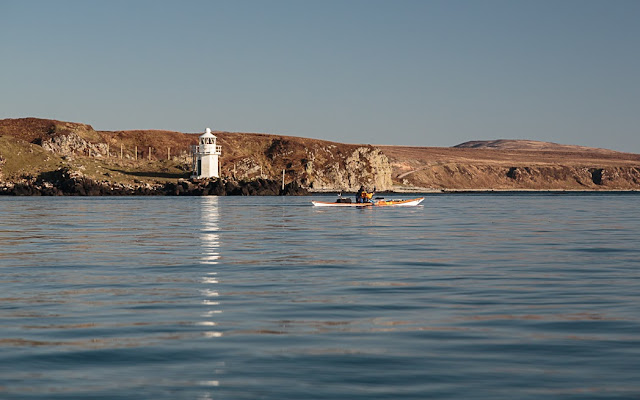 Although the water was like a millpond we passed the lighthouse at Carragh an t-Sruith (pillar of the current) at a casual 15km/hr! 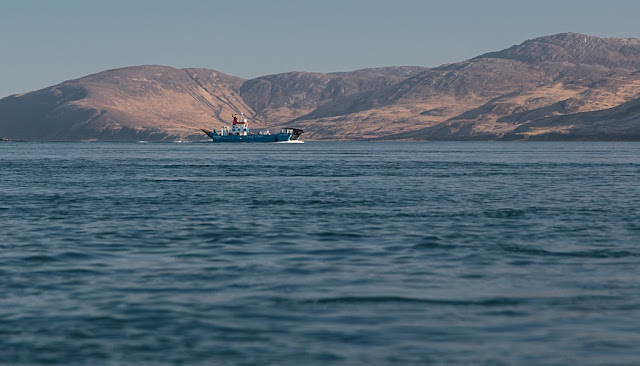 We hit 16.4km/hr in the narrows between Feolin and Port Askaig where the Jura ferry MV Eilean Dhiura crosses. our destination was An Cladach bothy, which lies beneath the highest summit to the right of the ferry. 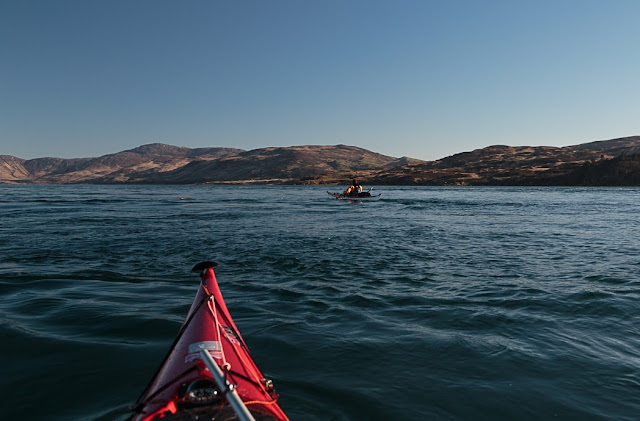 South of the narrows there were some great eddies which carried us off course but soon we arrived at... 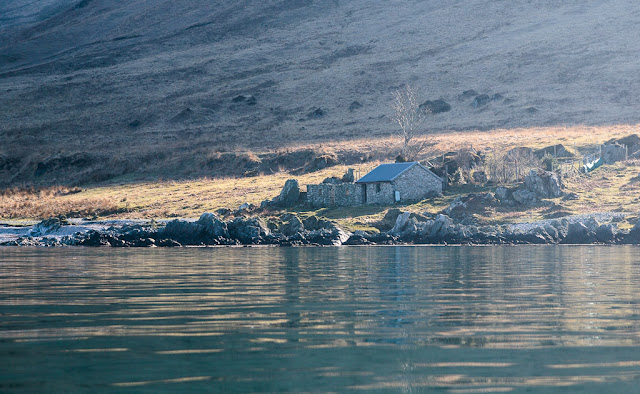 ...An Cladach bothy on the SE Islay shore (where Tony and I had stayed exactly a year ago). Unfortunately it was occupied by two couples and there are only 4 bunks. When we went inside the first woman said "Oh look they are all wet!" The second said "Oh look they are all wearing the same". It was then that I noticed the row of shiny polished boots by the door and a huge supply of food and drink including enough uncrushed loaves for a week. We decided to move on. One of the men followed us out and rather apologetically said he was the Mountain Bothy Association maintenance officer and they were up for a week to maintain the bothy.

Whatever the purpose of their visit, we saw no work clothes or maintenance materials. They had obviously been dropped off by boat rather than making their own way in. Parties using bothies for long term holidays seem to be becoming more common. When Ian and I visited Rum in the winter the warden warned us of two undesirables with bows and arrows who had set up residence in Guirdil bothy for two weeks. Exactly a year previously Tony and I had come across some Glaswegians in Cruib Lodge in Jura when we arrived after sunset. They told us they had been there for 10 days. Fortunately because it was outwith deer shooting season the estate side of the lodge was unlocked and they were in there. So we were able to stay in the MBA side. Another sea kayaking friend came across a man and two alsatian dogs who had been in a non MBA bothy in the Sound of Arisaig for 3 weeks! Whatever, I would only stay a night or two in a bothy as long term residence effectively decreases the number of people who  can take shelter there. 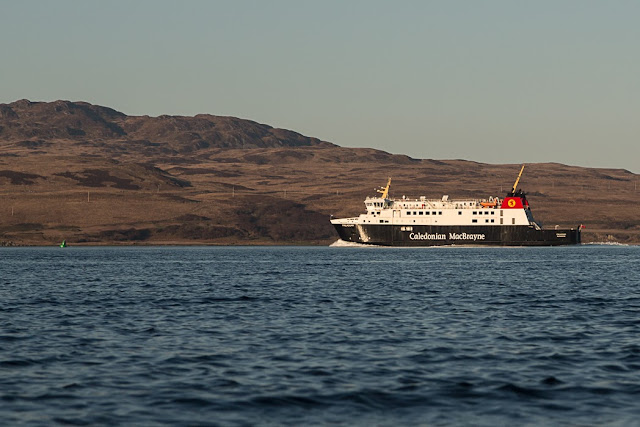 The sun had just set on the shore so we paddled down the rocky coast looking for somewhere to land and set up camp before dark. Mike and I landed in a little rocky inlet and were just about to explore when our VHF radios burst into life. It was the ferry MV Finlaggan warning the "warship in the Sound of Islay" to keep clear while she berthed at Port Askaig. 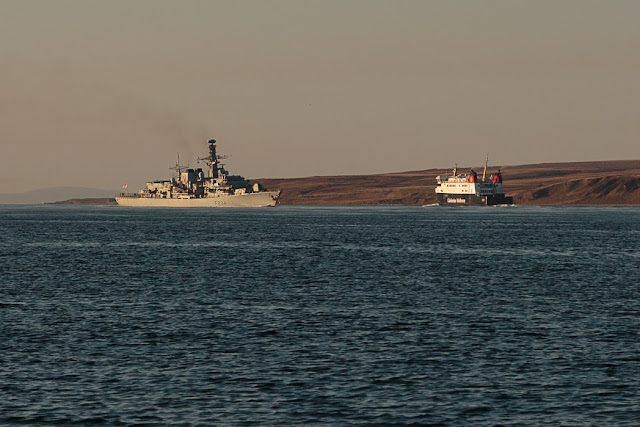 The warship very politely assured Finlaggan that there would be no obstruction to berthing. 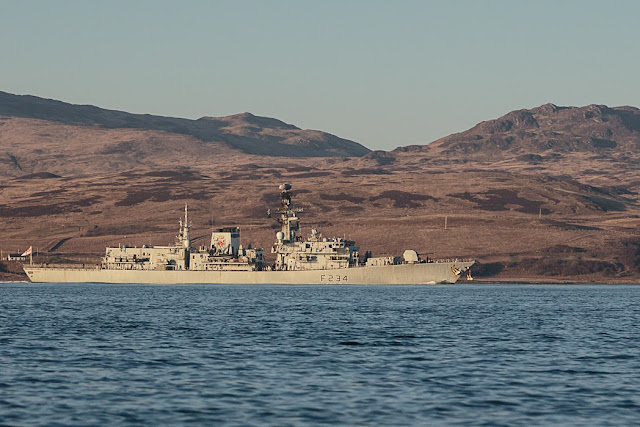 The warship proved to be a Royal Navy type 23 frigate, HMS Iron Duke, which was also involved in Joint Warrior. This was her on her way south after live firing exercises at Cape Wrath in which she used her 4.5" front mounted gun. Unfortunately the wash of both vessels trapped Mike and I in the gully for some time and the sun...

...had well set before we were able to launch and found somewhere more suitable to set up camp. If you enlarge this photo, you will just see the light from Ruvaal lighthouse 17km away to the NNW up the Sound of Islay. The photo also shows what would have been a glorious sunset when viewed from the little cove between the dykes of Jura, where we had last stopped and were tempted to camp. 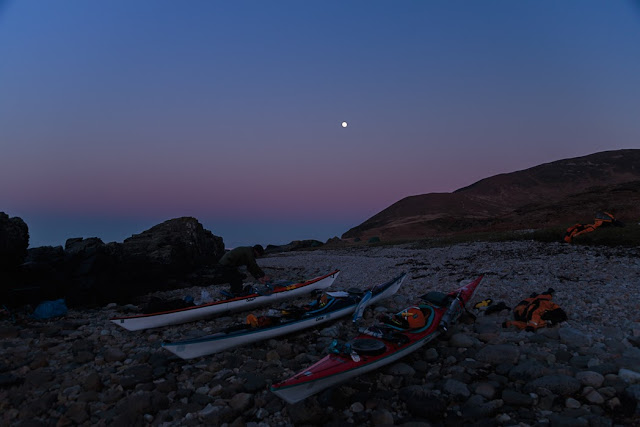 It does not pay to think of what might have been, either golden sunsets or warm bothy fires, instead we concentrated on getting the loaded boats up the beach and setting up... 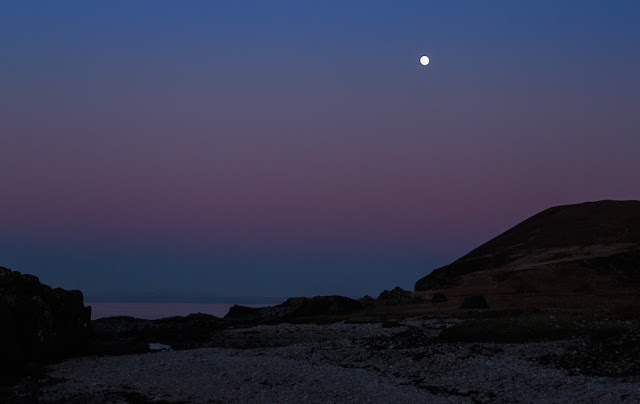 ...the tents in the light of the gloaming and a full moon. 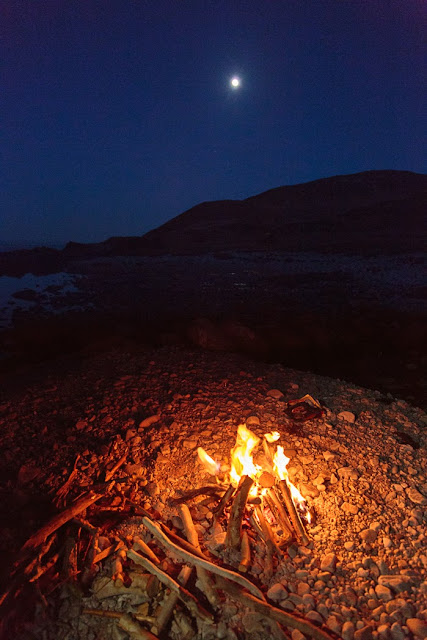 Not only had we brought tents we had also brought wood and a bag of charcoal, we soon had a warming fire going. What might have been a very uncomfortable night passed in great comfort, no doubt helped by some generous snifters of malt whisky. Another disaster was realized when I realized I had left the flask of Islay malt (Caol Isla) in the car. Fortunately reserve supplies of Jura and Speyside malts were available!
Posted by Douglas Wilcox at 11:45 am 4 comments: