In search of a Stone Age Queen. 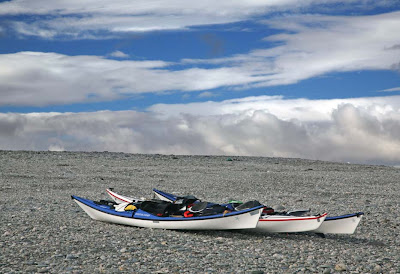 The north east tip of the lovely isle of Inchmarnock in the Firth of Clyde is a great bank of stones. At the end of the Neolithic Age and the start of the Bronze Age, some 4,000 years ago, the stones on this beach attracted a group of people who built a large cairn just above the shore. 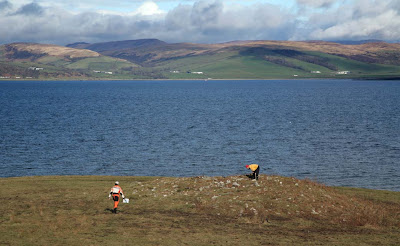 Jennifer and Tony explore the cairn.

Their efforts were sustained by the fertility of Inchmarnock which at that time was covered with oak and hazel forests which were teeming with wildlife. Nearby an ancient deposit of hazel shells, three feet deep, has been uncovered. Beside the cairn these people buried the body of an important female member of their tribe. 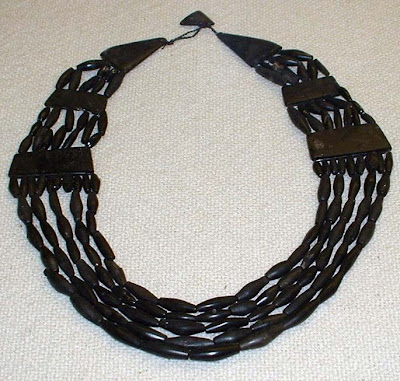 She was buried with a magnificent jet necklace inside a grooved and rebated cist. The cairn and the cist were excavated by Dorothy Marshall in 1960. The skeleton became known as the "Queen of the Inch". Her necklace is now on display in the Bute Museum. It was originally thought to have been made from local lignite but it after being studied by the National Museums Scotland (using X ray fluorescence spectrometry) it has been discovered that it is composed of at least five older necklaces made from Whitby jet. This and the style of the cist suggest a link between the West of Scotland and Wessex (and in turn to Brittany). 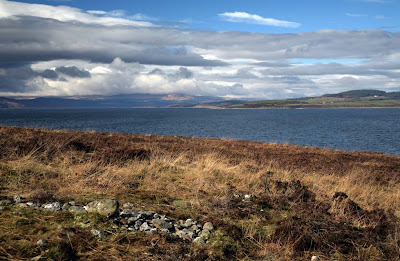 Looking north west from the cairn to the mouth of Loch Fyne.

After being excavated and carbon dated the skeleton was returned to the cist in its original site and a glass lid was fitted. Which sea kayakers could resist exploring for such a find? Not us! Hamish Haswell-Smith in The Scottish Islands gives the position of the glass covered cist as 80m to the SSW of the cairn. We searched very carefully but could not find it. The stone slabs below were in about the right position. 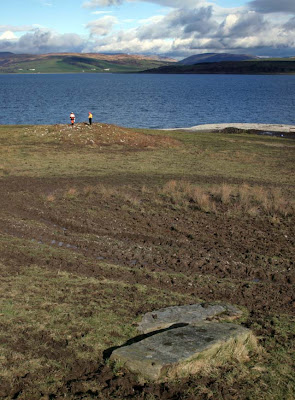 Was this the site of the cist?

As you can see the ground is heavily trampled by a herd of organic highland cows. We wondered if the stone slabs might be over the cist to protect it or whether it had been removed and the slabs now marked its original position. I decided to write to the owner and his wife replied as follows:

thank you very much indeed for your email. As you can see I am out of the country at the moment. I have a lot to tell you but if it can wait until my return to the UK I will give you a full brief. Everything is in safe hands and all will be explained."

Perhaps it will still be possible to see the Queen of the Inch in her glass covered cist.
Posted by Douglas Wilcox at 4:29 pm 5 comments: