The sun sets over Craignish; the cradle of the Scotland. 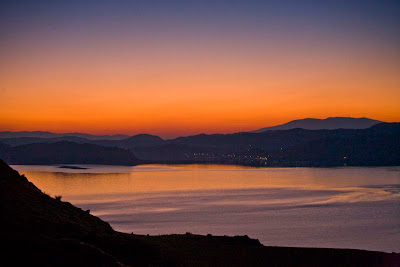 As we left the head of Loch Craignish, the road south climbed steeply up the Bealach Mor (the big pass). Before the road turned inland we enjoyed this amazing view over the loch to the ridges of Craignish and to the rocky outlines of Jura and Scarba beyond. The lights of Ardfern twinkled in the shelter of Eilean Mhic Chrion.

Craignish lies in the parish of Kilmartin which is the first village to the south of the Bealach Mor. This area of Scotland has been settled for over 4,000 years, since Neolithic times. In the vicinity of the village there are over 350 ancient sites within a radius of 10 kilometres. Not for nothing, is this area known as the Valley of Ghosts!

Much later, about 400AD, the Scots who lived round the coast of this part of Argyll, Kintyre, Islay and North Ireland, founded their kingdom of Dalriada here. Their capital was Dunadd fort which was built on a rocky outcrop. This rose from the Great Moss, the flat land behind present day Crinan. Gradually their influence extended throughout the rest of Scotland. The first King of all Scotland was Kenneth Macalpine, he was crowned at Dunadd in 843AD.