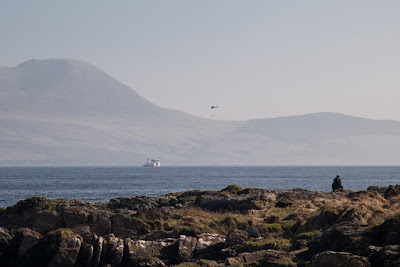 While we enjoyed a postprandial rest at Ravens Bay on Kintyre, we were entertained by an interesting conversation on VHF channel 6. An irate local householder was complaining to the Norwegian captain of the live fish carrier (well boat) Viktoria Viking about the noise from a helicopter (G-PGDF an Eurocopter (Aerospatiale) AS350, chartered from PGD helicopters) that was flying out to the ship. 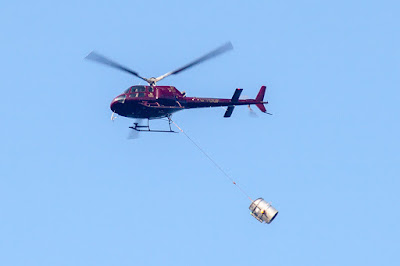 He was clearly very upset about the frequent low level flights that were carrying live fish from fish farms out to the well boat on such a nice calm day (just about the first decent day in 2012). The Norwegian captain explained the pilot was flying  today because he needed good weather. He also said the helicopter needed to keep low to avoid de-pressurising the fish. The householder then demanded that the Viktoria Viking should move away somewhere else.

Captain, "I can't do that, the helicopter costs £800 per hour, it would be cheaper for you to go and spend the rest of the day in a nice hotel."

Householder: "Are you saying you that you will pay me to do that?"

Captain: "No, you would need to contact the company, here is their number....."

Householder: "Just how long are you planning to carry on flying that helicopter?"

Captain: "Well our pilot is feeling very healthy today so we will carry on till near sunset..." 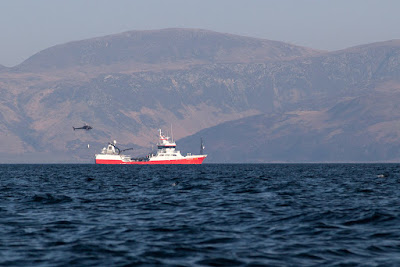 The Captain was just doing his job and we admired how he kept his Nordic cool when dealing with the irate householder. However, helicopter noise is just another facet of fish farm pollution, so we also understood the householder's position.
Posted by Douglas Wilcox at 7:00 am No comments: