Waiting for the tide on Inch Kenneth. 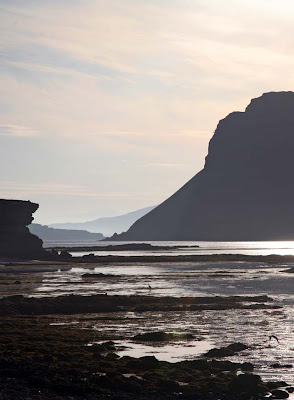 At spring low water, shallow reefs extend far from the east shore of Inch Kenneth. Some say there is a hidden, submerged path from the mainland of Mull to the island. 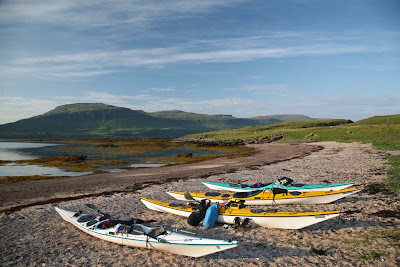 Our boats were some distance from the tide. We saw no point in straining our limbs, by carrying such heavy boats, when the exercise of some little patience would bring the tide to us. We decided to explore Inch Kenneth on foot. 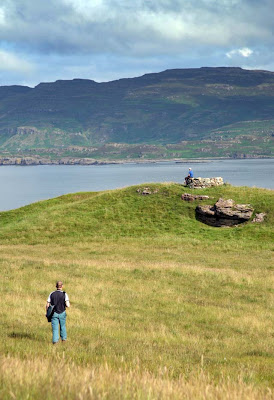 The fertile ground of Inch Kenneth contrasts with the rough, thin soil of distant Ulva. 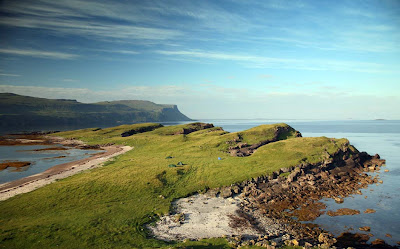 This view, from near the graveyard, is looking southwest from Inch Kenneth to the Wilderness and distant Ross of Mull peninsula (at the end of which lies Iona). In the middle distance is the little rocky islet of Erisgeir. This had just enough pasture for 6 sheep!

In the graveyard we also found the burial place of Lachlan MacQuarrie, the last chieftain of his clan, who died on 14/1/1818 at the age of 103. Johnson and Boswell had been entertained by MacQuarrie when they visited Ulva. They were unimpressed with his mean dwelling but Boswell found their host to be “intelligent, polite and much a man of the world.” Sadly MacQuarrie had to sell his ancestral lands shortly afterwards. Even his dying wish, to be interred among his ancestors on the Holy isle of Iona, was confounded by bad weather. He was laid to rest on this sheltered isle instead. For MacQuarrie the tide came in for the last time on Inch Kenneth. Looking around, we saw that there were much worse places to spend eternity.

We did not have eternity on our side but were able to leave with the flood tide.
Posted by Douglas Wilcox at 9:41 pm No comments: