The Rum Cuillin and Bloodstone Hill 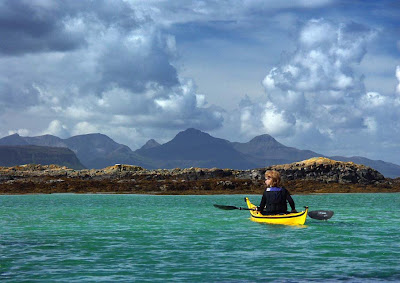 This is the view from the turquoise lagoon in the skerries at the mouth of Loch nan Ceal, Arisaig. The Cuillin of Rum are not so well known as their sisters on the misty isle of Skye but they have been attracting seafarers for thousands of years. Modern day Scottish sea kayakers know that one day they will paddle the wild shores of the Small Isles of the Inner Hebrides. The great arch in my recent post abuts onto Rum's remote north shore where Bloodstone Hill tumbles straight into the Sound of Canna. Bloodstone is one of the few rocks in Scotland which is good for making stone implements. It was also here that the sea eagle was reintroduced to Scotland.
Our ancestors have been visiting Rum for at least 7,500 years. A camp with a heap of hazel nut shells has been carbon dated to that time. Bloodstone arrow heads and axe heads have been found at great distances from the lonely isle of Rum. These people worked and traded bloodstone 3,000 years before the first stone was laid in an Egyptian pyramid.
At that time their boats were dug out canoes hewn from a single tree trunk. We modern kayakers paddle in the wakes of countless generations of skilled seafarers. It is humbling.
Posted by Douglas Wilcox at 10:51 pm 2 comments: