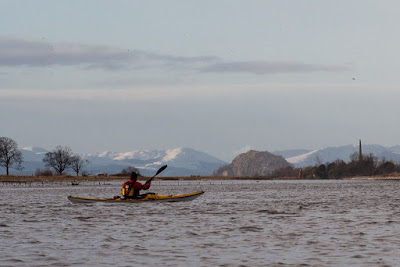 From Erskine we crossed to the north bank of the Clyde yet again. In the mid distance, Dumbarton Rock stood out darkly against the snowy mountains of Argyll beyond. 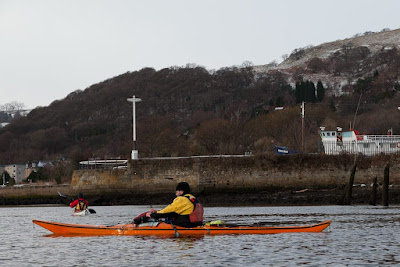 We were bound for Bowling at the entrance to the Forth and Clyde canal. The canal opened in 1790. We had to keep a high ferry angle as the ebb tide was fair bowling us along. 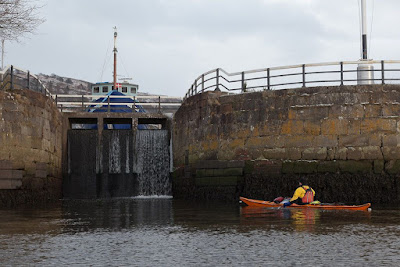 There are two sea lock gates but this one is no longer used and the lock behind is occupied by... 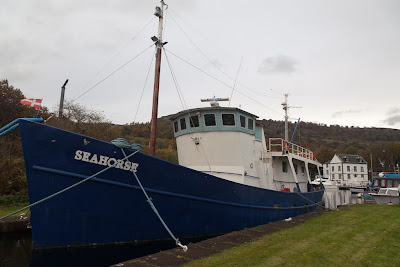 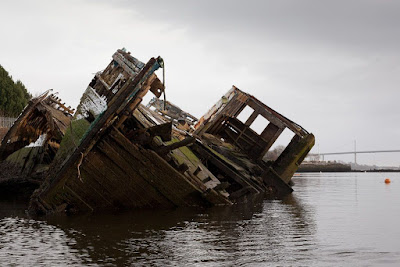 Nowadays Bowling is a graveyard for small ships. In the harbour a number of old wooden and steel hulks lie rotting, like this one, waiting forlornly for a caring owner like Seahorse's. Unfortunately she has seen better days, as has the whole of Bowling harbour. At one time, the Scotts of Bowling yard was the birthplace of many fine wee ships, until its closure in 1978.

Downstream of Bowling, we came to the Henry Bell monument, which has stood at Dunglass since 1838. Bell (1767-1830) was a steamship pioneer who launched the SS Comet in 1812 at Port Glasgow. He established a steam ship passenger service, which undoubtedly helped catalyse the development of the shipping industry on the Clyde. Unfortunately he wasn't much of a businessman and he died in poverty but even shortly after his death, his peers recognised the importance of his contribution nto the marine developments on the Clyde and elsewhere in the World. He assisted American, Robert Fulton, to introduced a steamboat service in New York 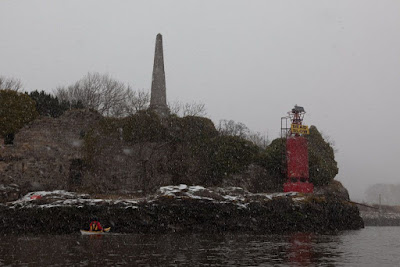 The monument stands in the grounds of Dunglass castle which dates from 1380. As we slipped down river below Bell's monument, it was humbling to think of all the human endeavour, the ships,  the seafarers and passengers, that had passed this way in the wake of the Comet. 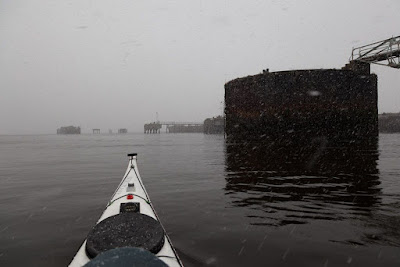 By now it was snowing heavily and we made our way through the many freestanding dolphins of the abandoned Esso oil terminal. It continued in use till the 1980's but has been made redundant by bigger tankers and the deep water terminal at Finnart in Loch Long. 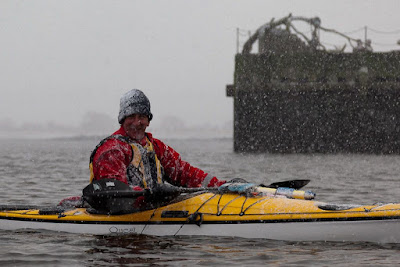 In the distance, behind Phil, you can just see the Lang Dyke. This 750m long wall was constructed in mid river by John Golborn in 1773. It directed the flow of the river, away from the shallows to the south, towards the north shore and natural scouring deepened the channel. 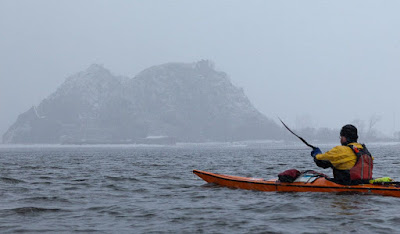 We were quite close to Dumbarton Rock  before it loomed out of the snow storm. We had paddled past extensive flats before reaching the rock. These were covered by countless feeding waders and despite its proximity to the city is an important winter ground for birds like red shank and oyster catchers. The whole of the Clyde estuary from Clydebank down to a line between Helensburgh and Greenock has been declared a site of special scientific interest, SSSI. 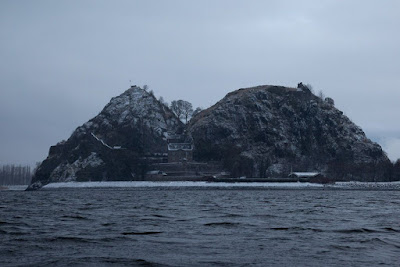 Dumbarton Rock is a 73m high volcanic plug formed of basalt. It forms an ideal defensive position with the Clyde on one side and the River Leven on the other. From the south, Dumbarton Castle can be seen nestling in a cleft in the rock. It is one of Britain's longest used defensive sites. Roman wine amphora have been excavated here, though nowadays you are more likely to find empty bottles of Buckfast,  some things do not change over the millennia. The building at the shore with the snow covered roof is the Bowling Club and its car park is one of the recognised water access points for kayakers on the Clyde estuary. The derelict ground to the right of the Bowling club was a Flying Boat factory in WW2, it made 260 Short Sunderland Flying Boats. Only the slipway remains.

To the west of the rock lies the mouth of the River Leven. Until recently, this area bristled with the high cranes of numerous shipyards on both sides of the Leven. Now no cranes remain, though the last was moved up to the BAE Systems yard at Scotstoun. Many famous and innovative ships were built here, the clipper ship Cutty Sark in 1869 and the World's first steam turbine driven passenger ship, the TS King Edward. The final Dumbarton yard was Denny's, which closed in 1964 after a foray into hovercraft producing the Denny D2, the World's first commercial passenger hovercraft the "hover bus" in 1963.

There has been so much innovation on the Clyde and so many World firsts and all in the wake of the Comet. Now a snowy winter afternoon, the only wakes on the river were those of our three kayaks....
Posted by Douglas Wilcox at 12:48 pm 4 comments: