From Dunoon Pier we paddled SSE for 600m and came to the Gantock Rocks.

This dangerous reef has claimed many vessels over the years. In 1977 the PS Waverly grounded on them but fortunately she got free. In 1956 the MV Akka, a Sweedish 135m long ore carrier, struck the rocks when her steering geer failed. She sank very quickly in about 3-4 minutes Three crew went down with her, 3 crew died in hospital later but amazingly 27 people were rescued. In 1829 Robert Stevenson produced a design for a beacon to be erected on the Gantocks. But it was not built until 1886. 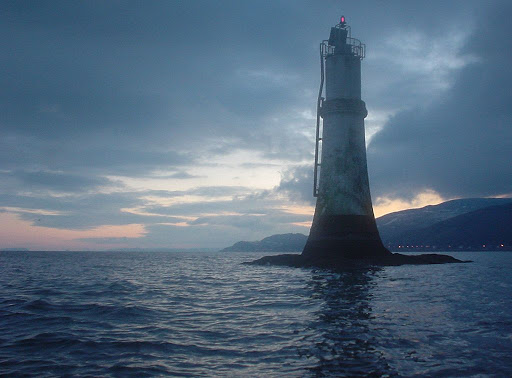 It flashes a red light every six seconds. Below the murky waters of the Clyde, the light is unseen by the many wrecks, which litter the sea bed round the Gantocks.
Posted by Douglas Wilcox at 4:11 pm 2 comments: