Odd one out at Belnahua. 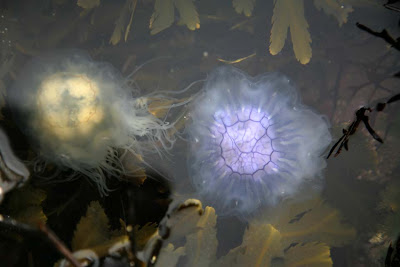 Summer 2006 was a prolific year for jellyfish on Scotand's west coast. Some say it is due to global warming, some that it is a result of overfishing. However, giant swarms have always appeared; they drift north feeding on plankton. I have never been able to understand their life cycle. How do they or their polyp offspring get back south again?

In a swarm of thousands of cyanea lamarckii (the blue jelly fish) I spotted this solitary yellow one at Belnahua. Jellyfish reproduce sexually and it is likely to be an albino, caused by inheriting two rare recessive mutations, one from each parent. Albinos are seen in many lifeforms. 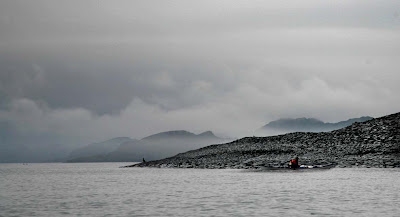 Looking south from Belnahua in the Sound of Luing to the mountains of Scarba.
Posted by Douglas Wilcox at 11:18 pm 2 comments: