The ramp of the Loch Ranza. 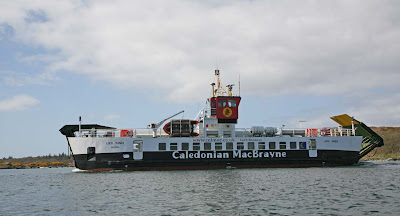 The MV Loch Ranza ferry serves the Isle of Gigha with ten return trips per day. On the mainland at Tayinloan, there is a large illuminated sign which tells when the next ferry is due. 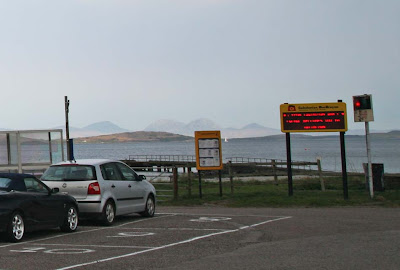 On a recent trip to Gigha we had to use the ferry to recover my daughter who did not fancy the crossing in a force 5 to 6 wind against tide. As we approached Tayinloan on the return, we could see two cars and a trailer on the jetty and a RIB was in the water being loaded by a large group of campers all wearing camouflage gear. When I say campers, it should be noted that most of their equipment consisted of cases of beer cans.

They showed no signs of hurry or concern at the approach of the ferry. They appeared secure in their knowledge that the jetty was theirs. The ferry captain's response was not to sound his horn but simply to steam quietly and purposefully towards his usual berth on the jetty. 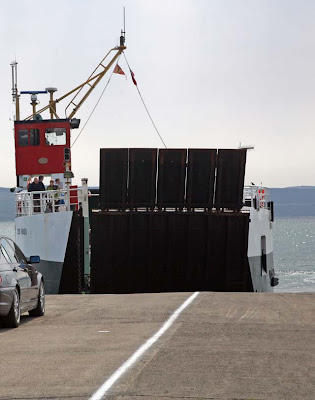 Then the captain unleashed the ramp! It was like something out of Robot Wars! What indignation! What panic! The RIB was moved to the side of the jetty but of course the water was deep there and one of the beer loaders got very wet. Their dogs started barking but the ramp continued its relentless decent. The Loch Ranza took up the full width of the jetty and the RIB disappeared from our sight. The ramp now edged slowly up the jetty towards the still laden car and its trailer. One of the campers leaped in and the car kangarooed its way back up the jetty.

We enjoyed this entertainment very much. I suppose that, since these fellow water users could not read a ferry timetable, they might not be able to understand tide tables either. If they camped on Gigha, their RIB might then float off in the night. If so, they would need to come back by the ferry.

Having left our campsite on Gigha spic and span, I hope they brought their empty cans back.
Posted by Douglas Wilcox at 10:43 pm 2 comments: