A house on the hill in the Kyles of Bute. 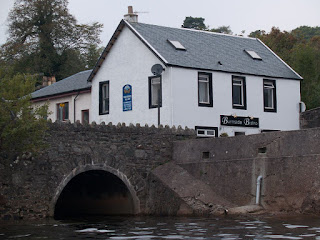 Just north of Kames in the Kyles of Bute lies the delightful village of Tighnabruaich. Its Gaelic name means "house on the hill". Nowadays many houses tumble down the steep hill, almost on top of one another, right down to the shore. We wondered if this was a secret waterside entrance to the Burnside Bistro! 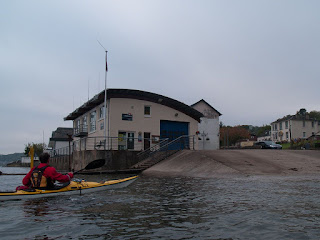 Tignabruaich has long been famed as a sailing centre. There are so many water users in the Kyles that the RNLI have an Inshore Rescue Boat stationed in the village. This is the modern lifeboat station and slipway. 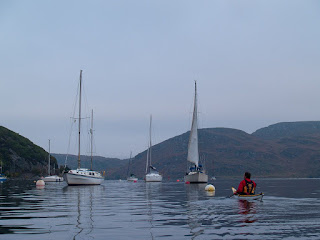 It was near the end of the season and most of the yachts were now lifted from the water and lined up on their winter standing. However, a few hardy souls were still enjoying the short, late autumn days on the water. It was not just yachtsmen and us sea kayakers. We had a very pleasant chat with a chap in a rowing shell. He had spotted it languishing under weeds at Otter Ferry and made an offer! 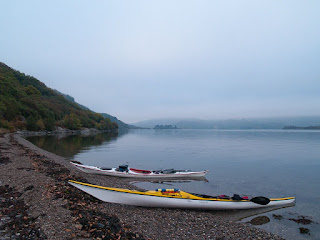 North of Tignabruaich we stopped for afternoon tea at Rubha Ban. In the distance we could see the wooded isle of Eilein Dubh. This would be our next destination in the delightful waters of the Kyles of Bute.
Posted by Douglas Wilcox at 9:28 pm No comments: