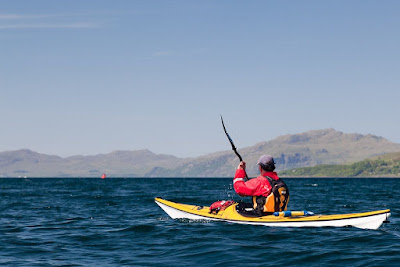 We followed the Morven coast for a further 1.5km north of Caisteal nan Con before we crossed the Sound of Mull to the Mull coast. The Sound carries a lot of shipping traffic so we chose to cross at its narrowest point in these parts. It was a relief to get out of the main shipping channel marked by the buoys. Several cruise ships had made their way up and down the channel just before we crossed. Fishing boats and speed boats don't stick to the channel though, so we still needed to be vigilant. 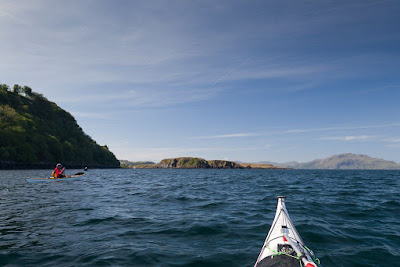 As we entered the NW part of the Sound, we could see Ben Hiant (528m) on the distant Ardnamurchan peninsula. Nearer at hand Calve Island partially blocks the entrance to Tobermory Bay.

We chose to enter the bay via the narrow channel between Calve Island and Mull. 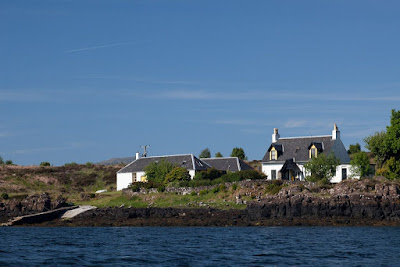 The farmhouse on Calve Island is where the Canoe Boys stopped off (for some time) on their way north to Skye. 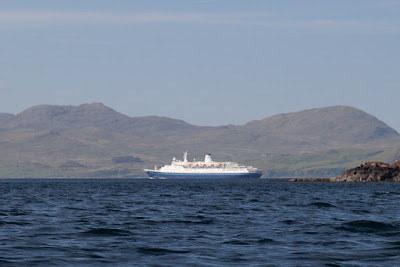 We were not the only visitors to visit Tobermory by sea.  Fortunately the MV Marco Polo had just departed. She was built in East Germany in 1965 and launched as the MS Alexandr Pushkin. She is not the first foreign built ship to seek shelter in Tobermory Bay. In 1588 a Spanish Galleon (part of the Armada)escaping from the English Navy is reputed to have anchored here but later exploded in mysterious circumstances. Some say she was carrying gold, which lies in bottom of Tobermory Bay to this day. 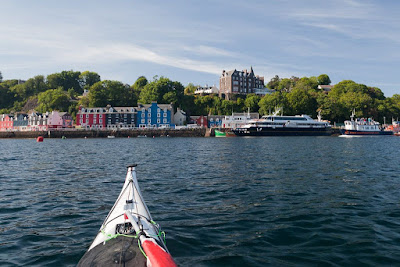 The MV Lord of the Glens was docked at Tobermory pier. She takes 54 passengers and is small enough to negotiate the locks of the Caledonian Canal and big enough to ply the more sheltered waters of the west coast. 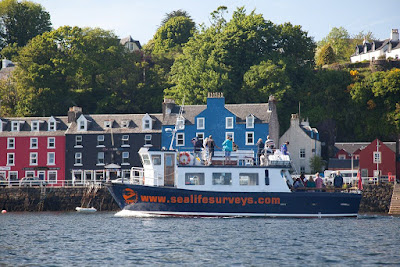 As we made our final approach , we slowed to let this whale watching boat pass in front of us. The black building is the Mishnish Hotel, which has an excellent pub! Tobermory caters well for tourists. 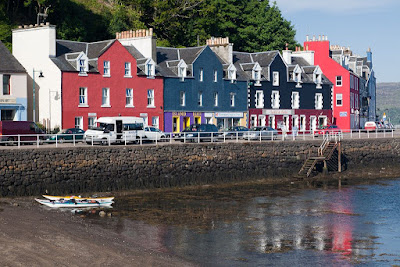 The tide was out and we landed on a strip of sand below the gaily painted houses. Tobermory is the biggest settlement on Mull and was built in the late 1700's as a fishing port. The name is derived from the Gaelic 'Tobar Mhoire' which means Mary's well. If you have never been but Tobermory looks familiar, you have probably seen it as the backdrop to the BBC children's TV series Balamory.
Posted by Douglas Wilcox at 10:07 pm 5 comments: