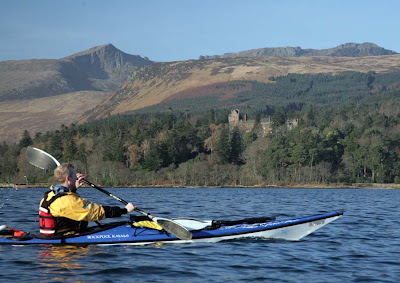 On our recent seakayaking trip to Arran in the Firth of Clyde we paddled across Brodick Bay. This gave us a wonderful view of the Caledonian pine forest that hugs its northern shore and the castle grounds. Brodick Castle is built on a lofty position and its red sandstone walls rise in magnificently splendour amidst the red barked pines. It has a similar island and mountain situation to Kinloch Castle on Rum, which is also built from red sandstone. It was reputedly built from the same quarry on Arran as Brodick Castle however, its stones came from Dumfriesshire. 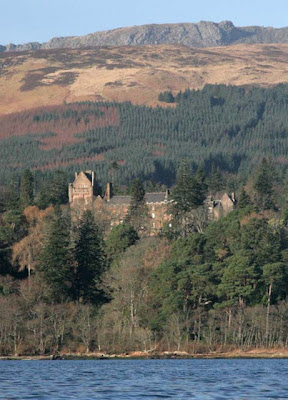 On a long summer’s day, the castle would have been an essential stop. It was built on a site that has been fortified since at least the fifth century. The original stone keep was built about 1266 but it has been extended and modified many times since then as it played an important part in the Wars of Independence first from the Vikings then from the English. It was extensively rebuilt in the nineteenth century as a shooting lodge.

It was in the Hamilton family’s hands for nearly five hundred years but following the marriage of the last male Hamilton’s daughter; it passed to the Montrose family in 1906. Their descendants bequeathed, it in lieu of death duties, to the National Trust for Scotland in 1958 and now any one can enjoy its buildings and gardens. Look out for the summer house which has an interior is covered with pine cones.
Posted by Douglas Wilcox at 9:07 pm 5 comments: