What a carry on at Tarbet! 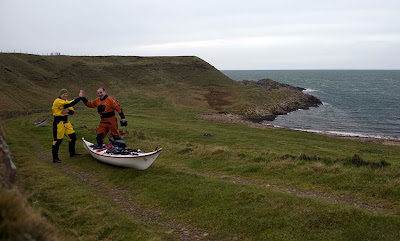 Made it! Our relief at rounding the Mull was palpable. We landed in west Tarbet Bay and there was a unanimity in our decision not to head further north to Port Logan, where we had left the shuttle car. The forecast was for force 4 to 6 winds gusting to 37 knots by evening but the front had obviously arrived early.

There are several places in Scotland called Tarbet or Tarbert. It comes from the Gaelic word Tairbeart. In modern Gaelic this means isthmus but its origin lies in "over carry". These isthmuses were where the Vikings carried their longships overland from one side of a peninsula to the other. 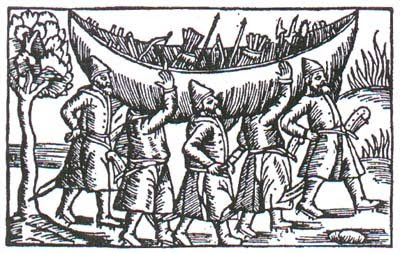 This often avoided a dangerous voyage round a headland but it was also a way of claiming land! The Vikings reached a truce with the Scots, which allowed them to rule any "islands" they could sail (or drag) their boats round!

From a distance the Mull of Galloway looks like an island as the Tarbet is low enough to be under the horizon. The day was yet young so we decided to carry our kayaks Viking style over the 0.45km distance and 21m height of the Tarbet. It was hard work, as unlike the Vikings, we had set off unarmed and were so unable to persuade any locals to assist us in our endeavours. 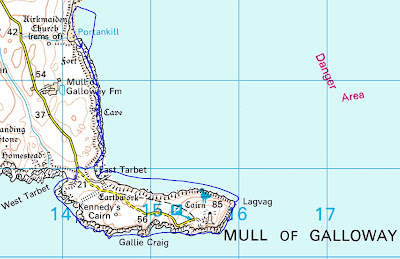 The boats were soon on the beach of east Tarbert Bay but we needed some lunch before heading out again!