Gusty headwinds under the cliffs of Mull's Laggan Peninsula. 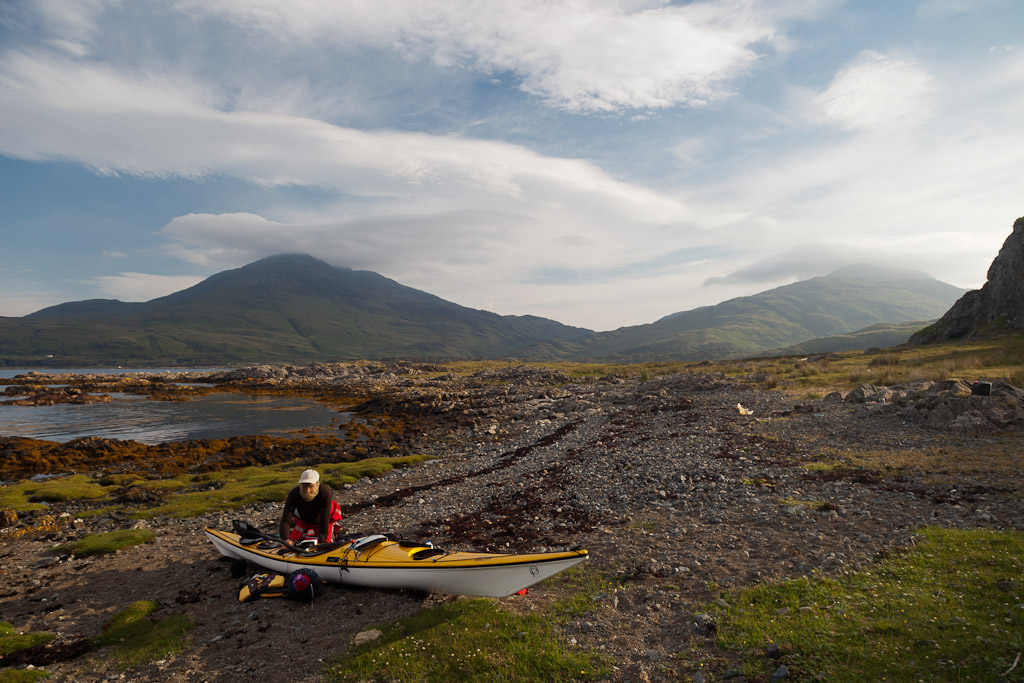 We awoke on the shores of  Loch Buie on Mull to find that a light SE wind was sufficient to keep.... 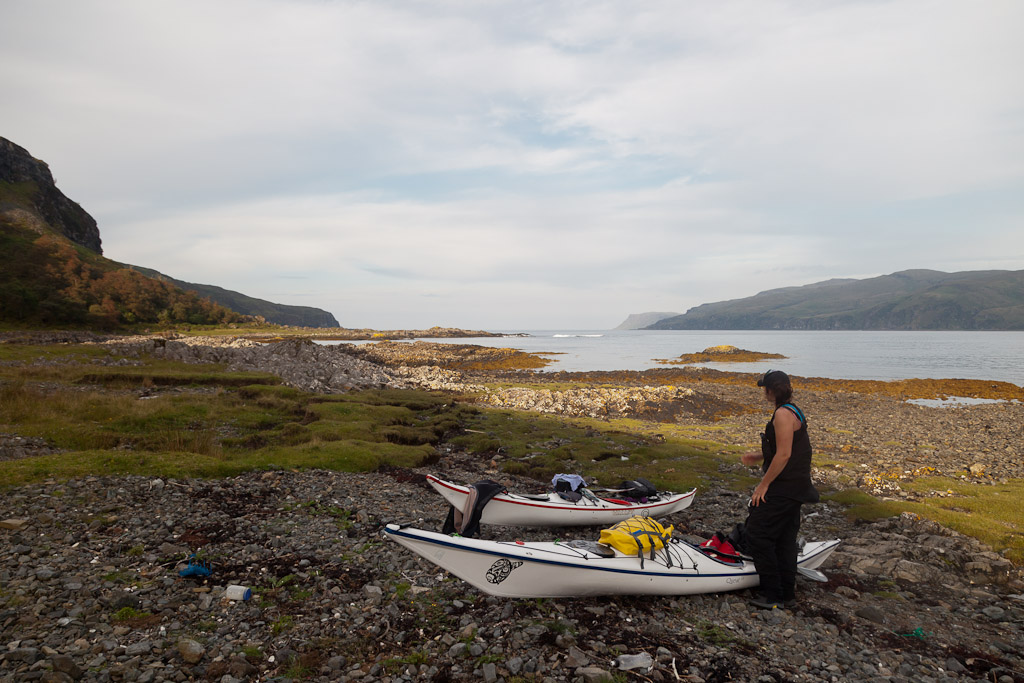 ... the morning midges at bay. The weather forecast was for light and variable winds increasing to F4 to F5 S-SE winds by midday. Given that it was midsummer and sunny there was also the possibility of afternoon thermal winds increasing the wind even more. So we decided to make an early start and were on the water by 07:30. 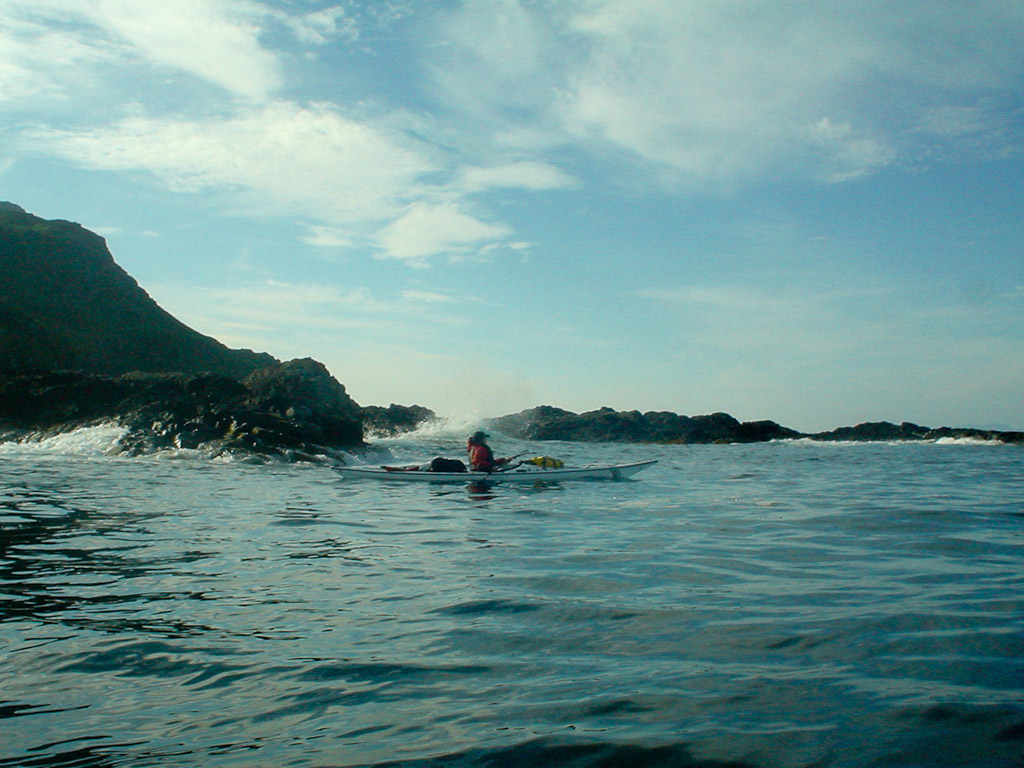 We were in the lee of the Laggan peninsula and at first there was very little wind but a fair amount of swell was wrapping round Rubha na Faoilinn at the entrance to Loch Buie. 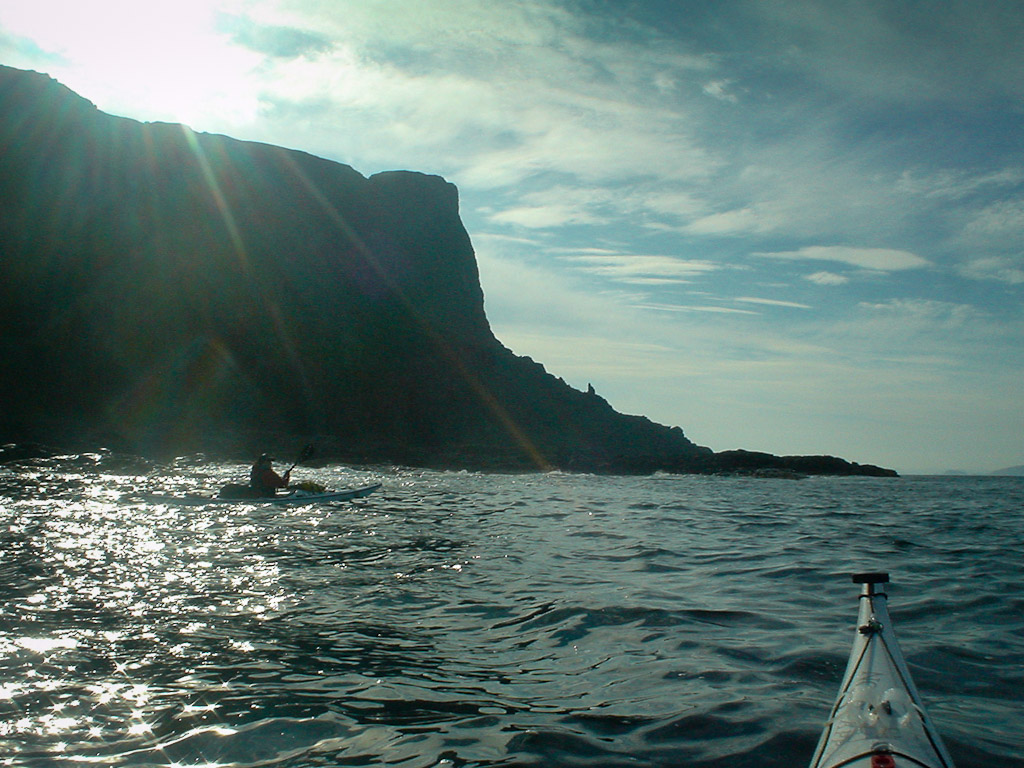 On rounding the point we were hit by a very gusty head wind from the SE which... 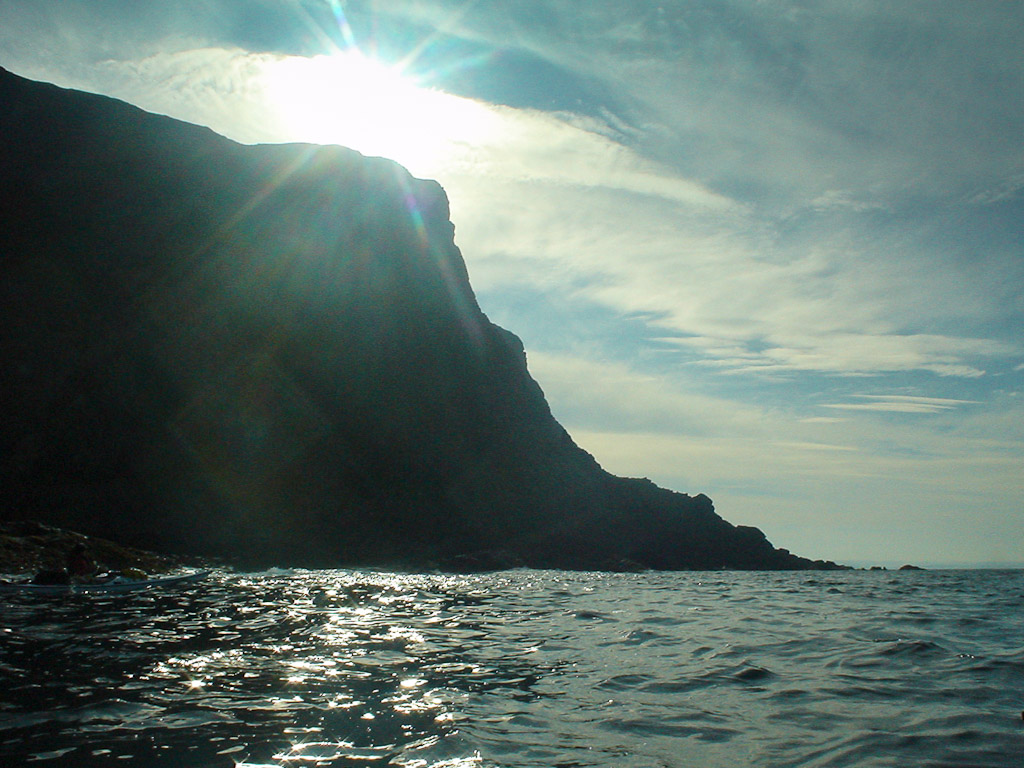 ...was shrieking and swirling along the steep cliffs below... 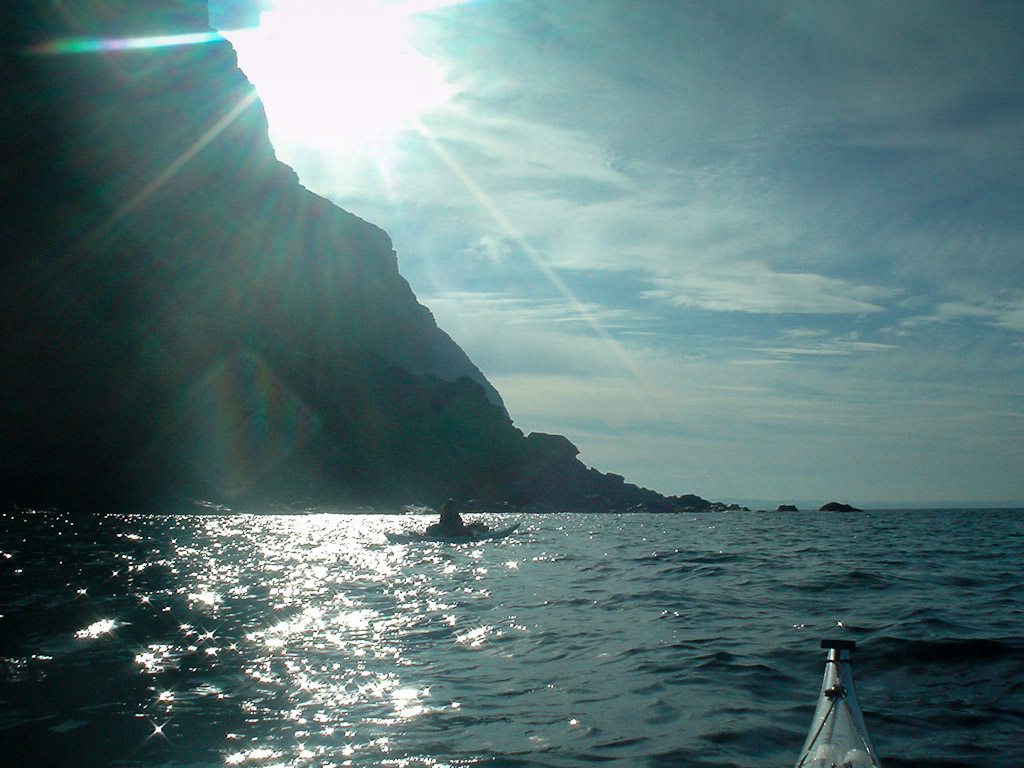 ...the steep cliffs of An Garradh. The gusts were so strong that they were lifting waterspouts off the surface of the sea and threatened to snatch the paddles out of our hands. As we put our heads down, our forward progress was slowed to less than 1km/hr. 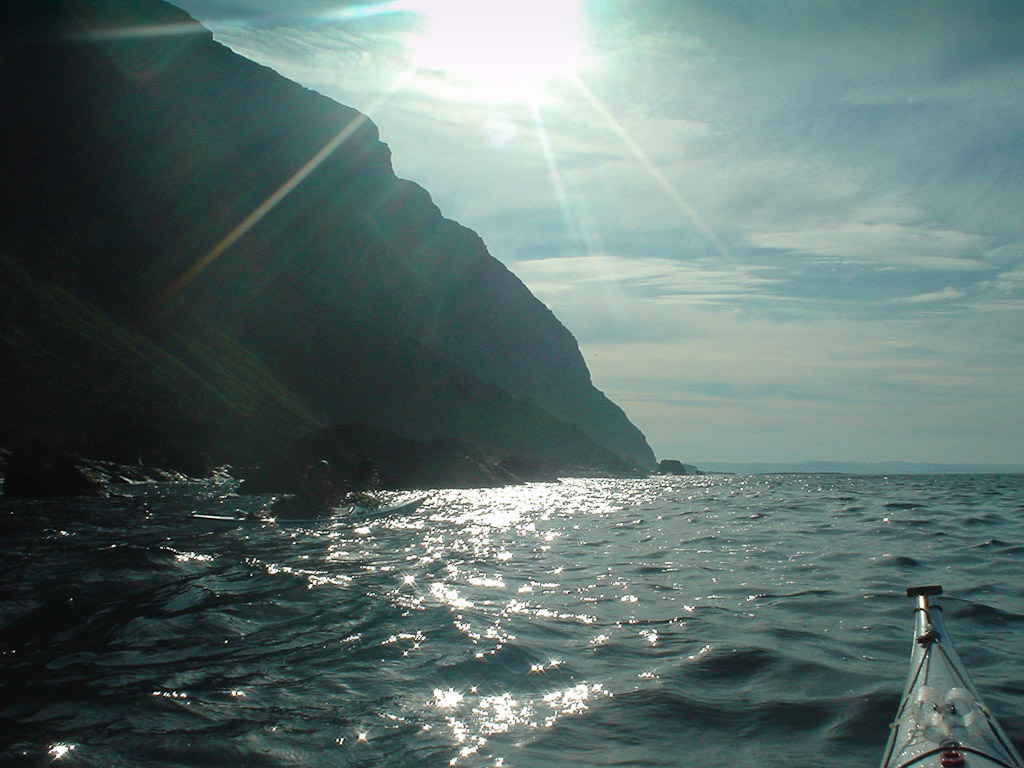 The early morning sun was reflecting on the sea in front of us, which made it difficult to see the approaching gusts. The gusts were so unpredictable and ferocious that I did not risk using my Canon DSLR and so these photos were all taken with a little 2mp waterproof camera. 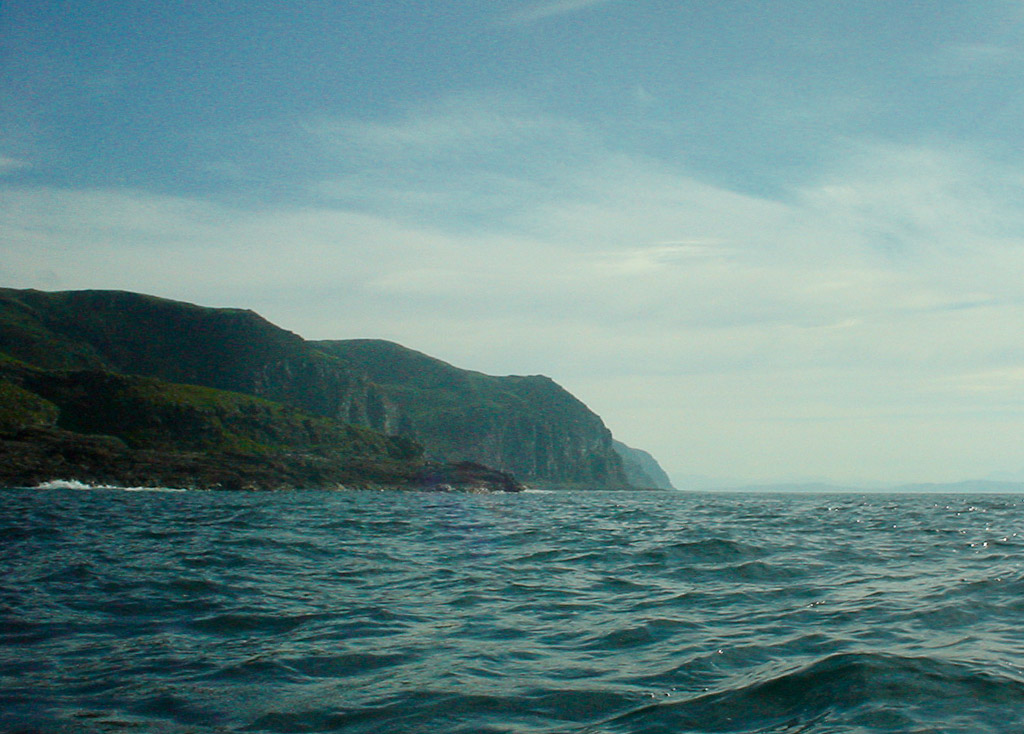 After an exhausting 4km paddle straight into the teeth of the wind, it was a relief to shelter in the lee of Frank Lockwood's Island. We were rewarded by a magnificent view of the cliffs on Mull's remote Laggan peninsula, which stretched away to the NE. Lying in the shelter of the little island we discussed our options. We wondered if the forecast F4-F5 winds had arrived early. If so they would make our 12 km open crossing of the Firth of Lorn rather unpleasant as they would be blowing over and against a big spring ebb tide. We battened down the hatches.... .
Posted by Douglas Wilcox at 2:12 pm 2 comments: