An evening alternative to the Abbey on Iona 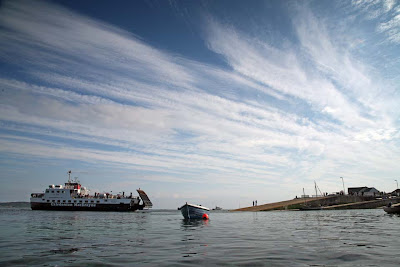 After an arduous day sea kayaking round Iona and the Ross of Mull we landed on Iona just as the MV Loch Buie was making her last crossing of the evening. The last of the many day trippers were waiting on the jetty to return to the mainland. The crowded isle of the day was about to return to the peace of the evening and its past. (With the useful addition of our good selves of course.)

It had been a long hot day and we were in need of some sustenance as there was still to be a final eight long Scotch kilometers until our keels would be hauled up on the white sand of our chosen camp for the night. We spotted an unprepossessing building at the top of the slip. Closer inspection revealed it to be the Martyr's Bay Restaurant and Bar.... the only bar on the island no less.

Despite the undoubted attractions of the nearby Abbey, which is one of Scotland's most historic and venerated sites, we felt a duty, to you the reader, to further investigate and report upon this outwardly unassuming hostelry, situated as it is on this most Holy of the Isles. 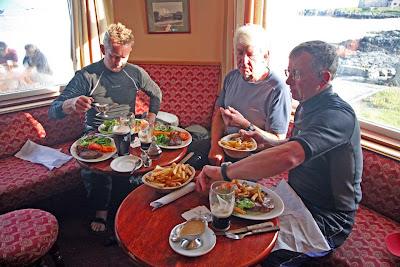 Leaving a sandy trail on the plush carpet, we made our way to a well upholstered seating area with a fine view over the Sound of Iona. We ordered some pints of Guinness to assist our perusal of the menu. On hearing of our desire to dine, the friendly staff asked if we would prefer to move to the formal dining room. We declined as we wished to cause no loss of appetite to other diners. We were accompanied by a certain odour which was evidence of several days' activity in the great outdoors.

Despite an extensive selection of freshly caught seafood, we chose steaks. After all, we had already enjoyed a luncheon of freshly caught and cooked mackerel on a deserted white sand beach. An excellent meal deserved to be washed down with some more refreshments which were served at just the right temperature. My only minor criticism was that a rare steak was served medium. This however, is something that is quite common in Scotland. Scots as a race like to make sure that their food is quite dead before they eat it. Some (though not this restuarant) even do the same with vegetables.

Boswell and Johnson also visited Iona on their tour of the Hebrides. Although Boswell did not drink alcohol he quoted Johnson "....No, Sir; there is nothing which has yet been contrived by man, by which so much happiness is produced as by a good tavern or inn." I think Johnson would have been well pleased with this one. 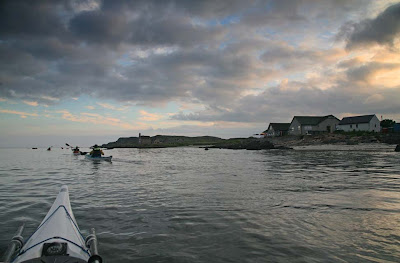 After a farewell to the attentive staff, we made our way back to the boats and our day on the water continued. The Martyr's Bay Restaurant and Bar proved to be a truly excellent sea kayaking pub, with first class food as a bonus! It is highly recommended.

Safety Notice. Sea kayaking is already a risky activity. Alcohol and water do not mix. This bar offered a wide selection of hot and cold non alcoholic beverages.