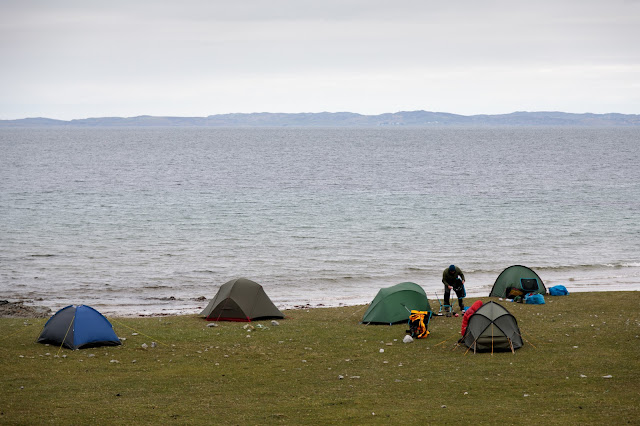 We woke on the morning of our fourth day of our trip round Jura and Colonsay on the machair of Shian Bay on the west coast of Jura. A cold NW wind was blowing  and it felt like spring had retreated to allow the return of winter.

As we had no intention of paddling through the Gulf of Corryvreckan against the west going flood tide, in wind over tide conditions, we wanted to arrive at the west end of the Corryvreckan at slack water before the east going ebb started. That was not until late afternoon and as the Corryvreckan was only 24km away, we had some time to kill. Unfortunately there was not a scrap of shelter on Shian Bay so, on the one morning we could have enjoyed a relaxed start, we had to get moving to keep warm. 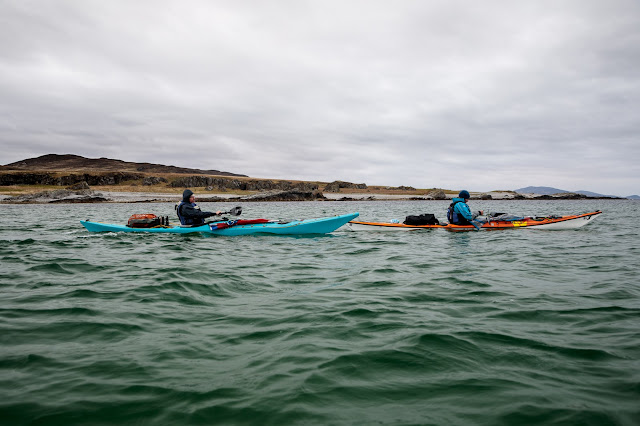 We donned full winter attire and... 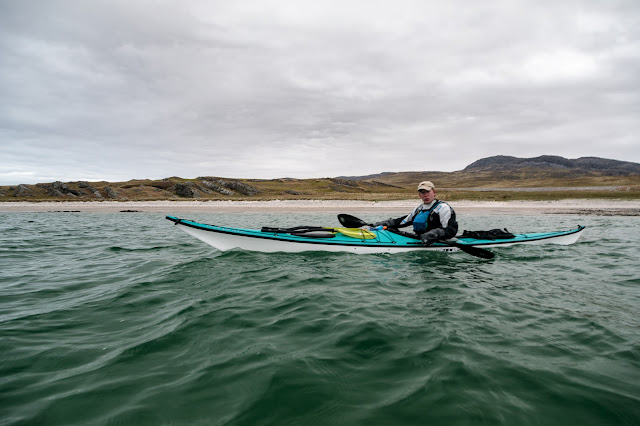 ...Sam even had his pogies on. What a contrastv to the previous few days. 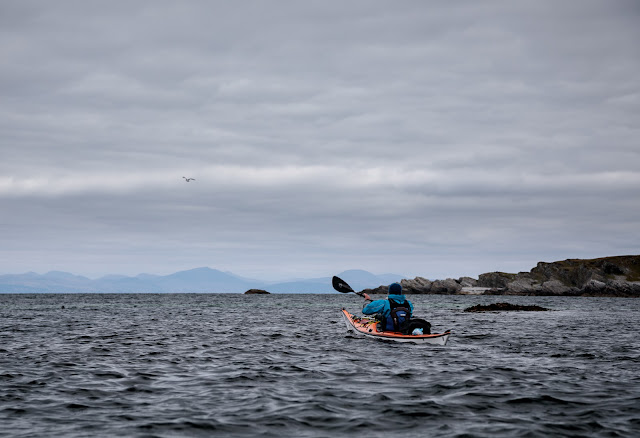 As we left Shian Bay the wind had just a little too much north in it to get our sails up which... 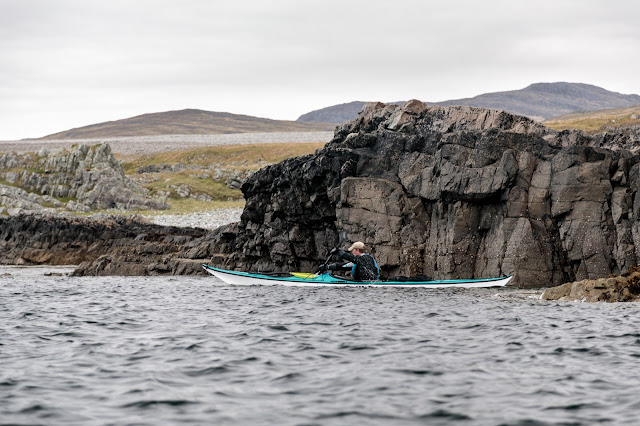 ...pleased sail-less Sam. Then, as soon as we rounded the first headland (backed by huge raised beaches of cobbles),... 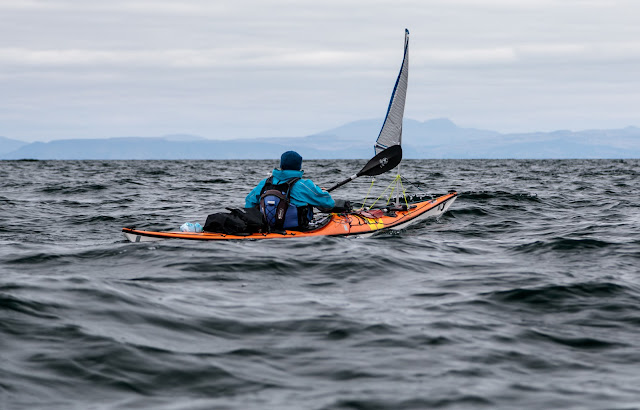 ...the wind freed enough to get our sails up and we were soon making excellent progress up the... 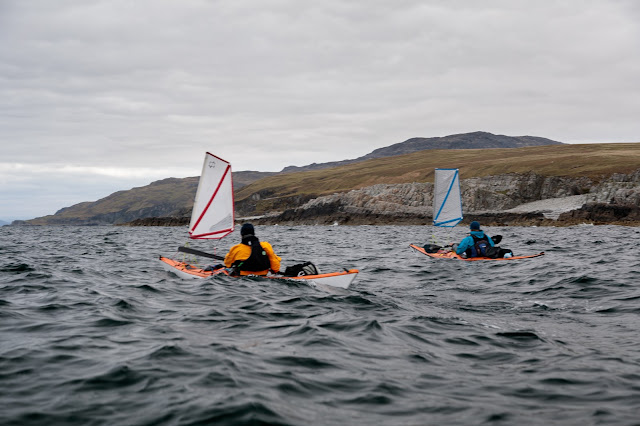 ...remote NW coast of Jura, which is always a delight. 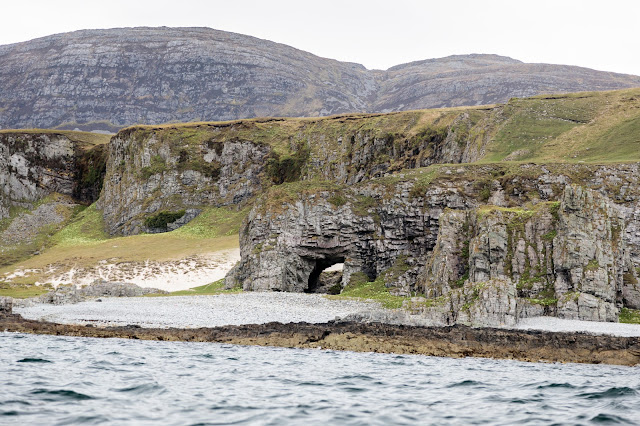 In addition to the raised cobble beaches there are several levels of raised cliffs, which feature dry arches and caves and are interspersed by sand dunes. They represent the varying sea levels after the last Ice Age. The west coast of Jura is one of the geological wonders of the World but it gets hardly any visitors. 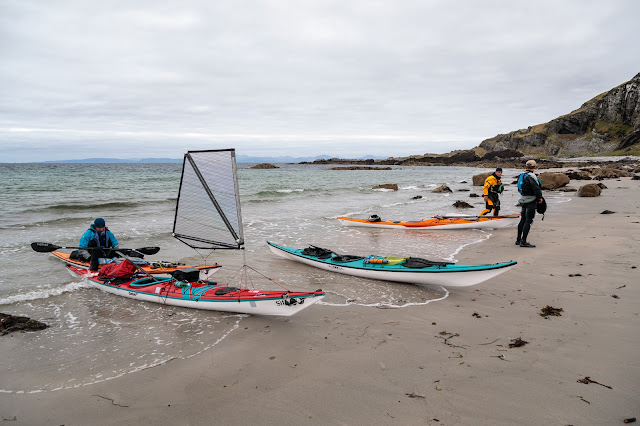 Our first stop was at Corpach Bay, some 7km further on from Shian Bay. Corpach Bay is backed by caves which were once used to store corpses from Argyll on their final journey to Iona for burial. Iona is 45km away on the horizon at the extreme left of this photo. Often sea conditions were too rough to complete the journey, especially in winter. One can imagine the smell in the caves come springtime when the mourners returned. 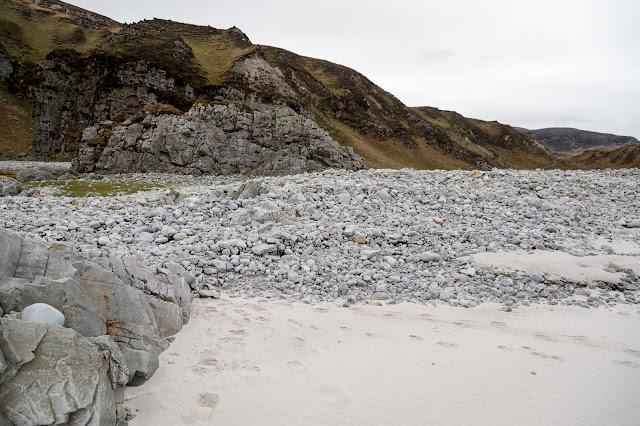 We needed some shelter for second breakfast and, not fancying the caves, we spotted a dry sea stack at the back of the beach. 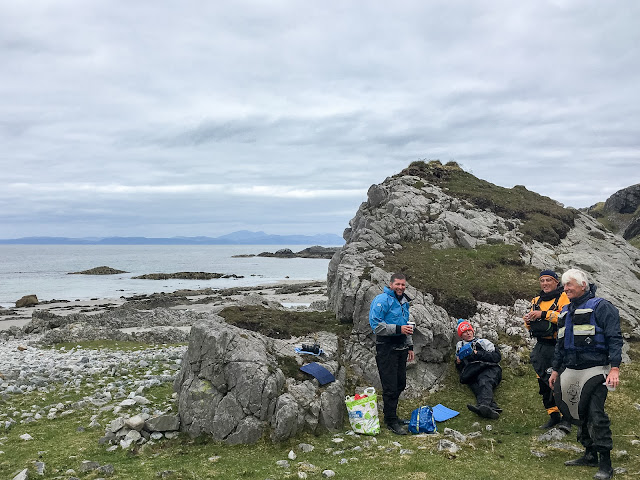 This provided excellent shelter for a most convivial second breakfast. We were all in excellent spirits as we were in no hurry and had no dead to bury.

Posted by Douglas Wilcox at 2:46 pm No comments: