Kayaks at dawn in the Ballachuillish narrows. 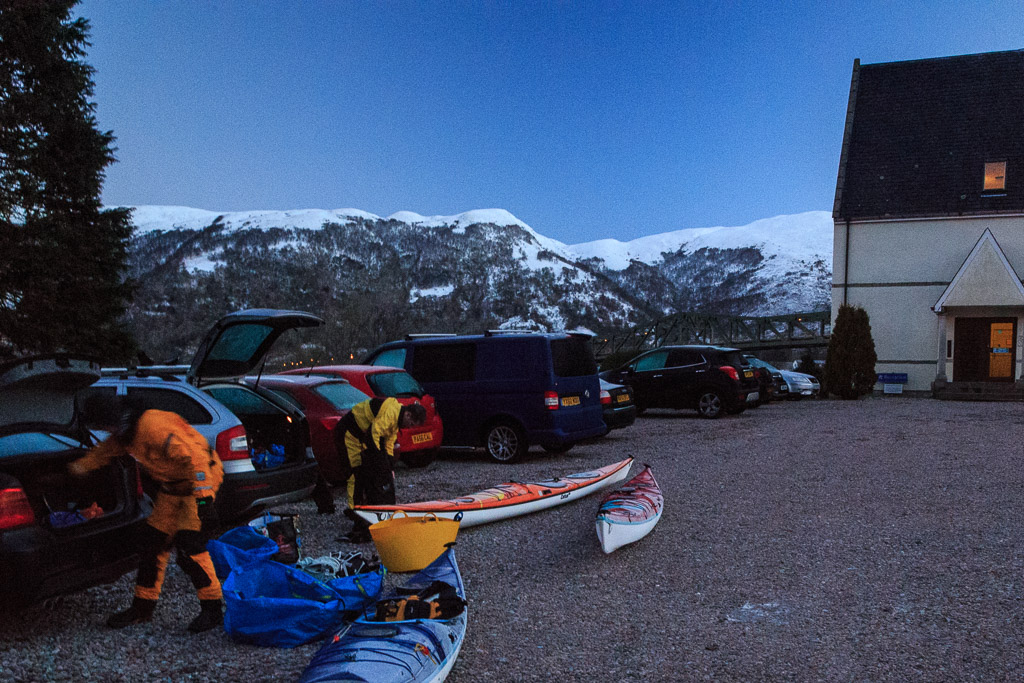 We spent a very comfortable night in the excellent Ballachuillish Hotel. We planned to launch from the hotel and so started to load the boats in the car park. It was minus 12C though elsewhere in the Highlands it had fallen to minus 13.7. Whatever it was a bit nippy on the hands. 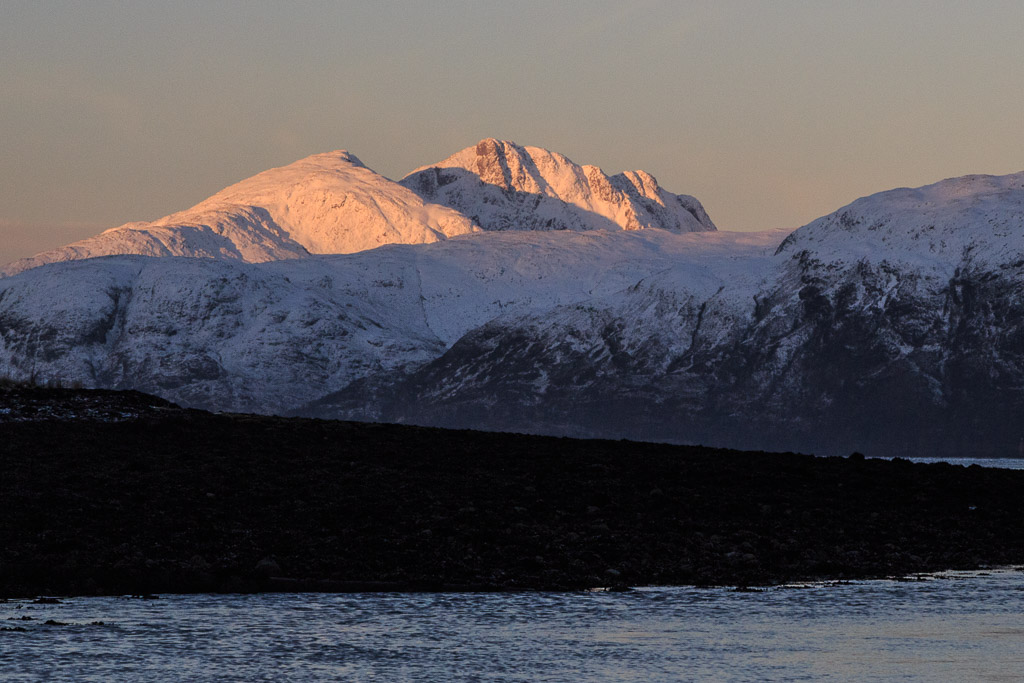 Although the loch side was still in darkness the summit of Garbh Bheinn, 885m, was catching the first rays from the rising sun which was still well below our horizon. 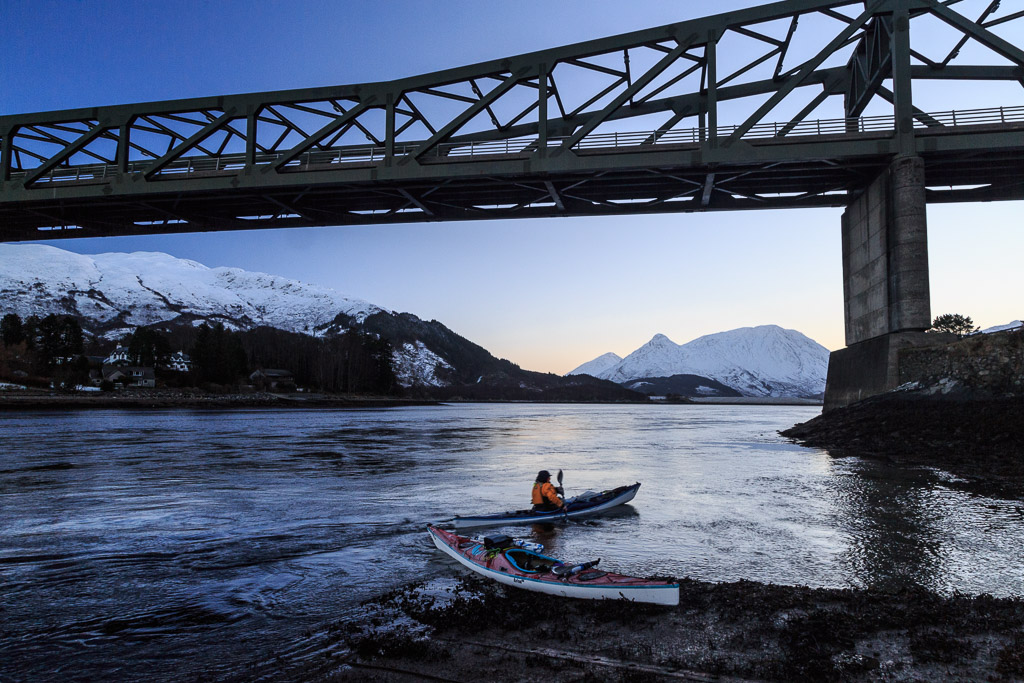 We trolleyed the kayaks a short distance to the jetty of  the old BalLachuilish Ferry. The bridge was completed at the end of 1975 but, before that, a vehicle ferry ran across the narrows from 1903. These were flat bottomed turntable ferries and used the slipways in the shallow water at either side of the narrows. One of the last of these ferries was the Glenachulish. She was built in 1969 at the Ailsa yard at Troon on the Firth of Clyde. She served the Ballachulish crossing until the bridge opened, then she was moved to Kessock and then Kylsku to serve as the relief ferry until those crossings were replaced by bridges in 1982 and 1984. After this she moved to Glenelg for the Skye crossing where she still serves today. The Ballachuilish crossing at the peak of a spring tide always provided an entertaining ferry glide.

We planned to go up the north side of the loch to catch what little sun might make its way down to the loch through the steep mountains. The ebb tide was pouring out the narrows at 5.5 knots. Mike decided to take the eddy well up under and beyond the bridge before ferry gliding across the narrows further up. I decided to just tough it out by ferrying across the fastest flow at the bridge. I had to PLF and was very warm by the time I got to the other side but at least I could rest while I watched Mike... 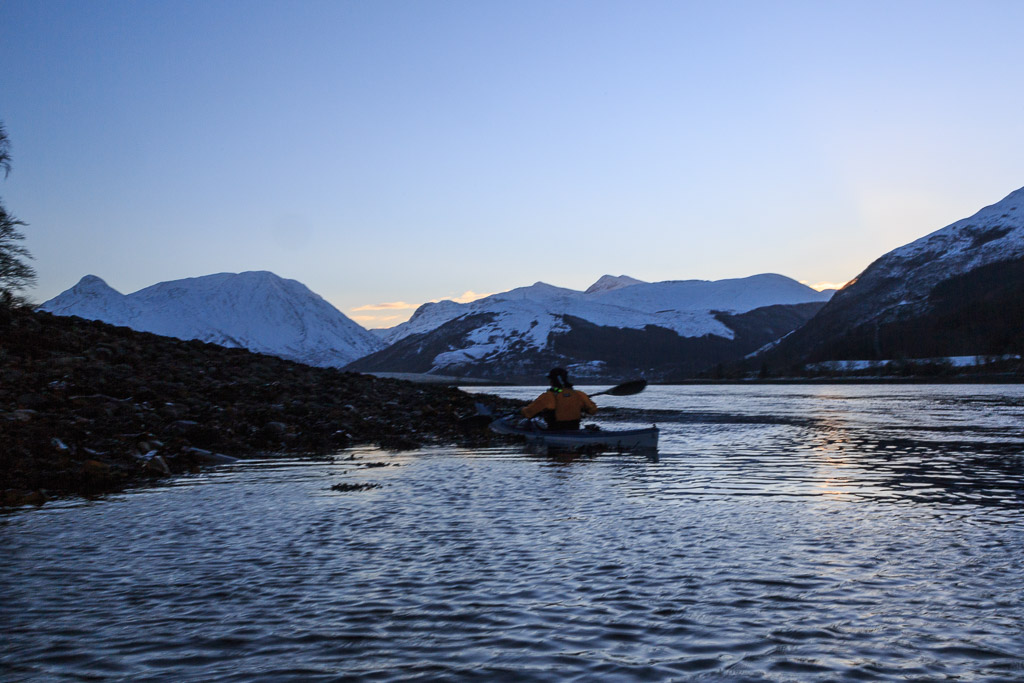 ... come across into a small eddy then watch... 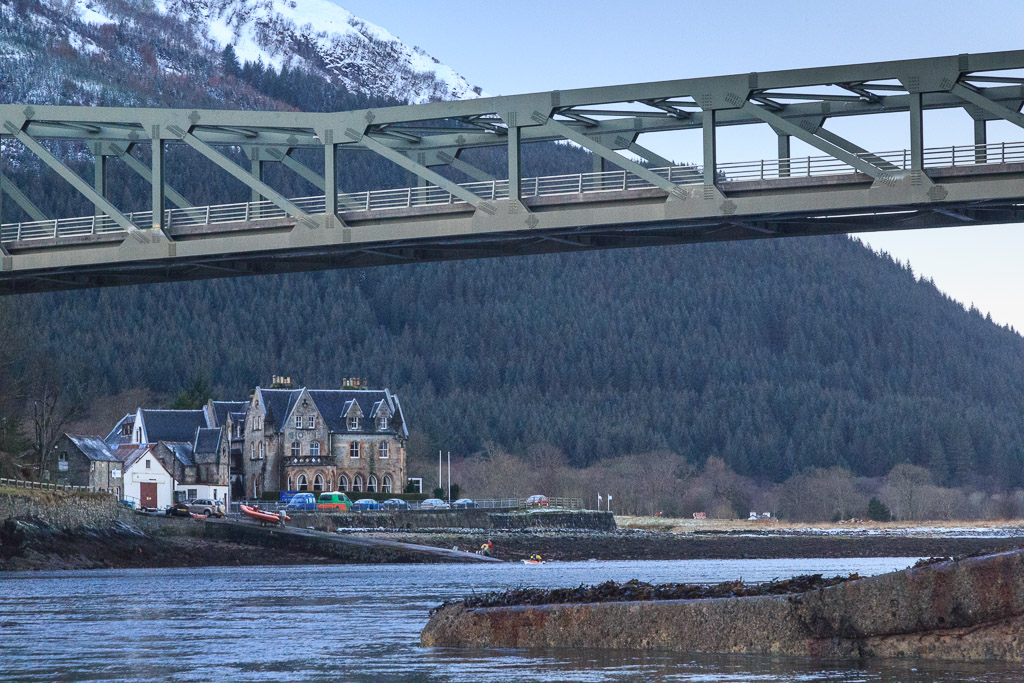 ...Ian make his way across. 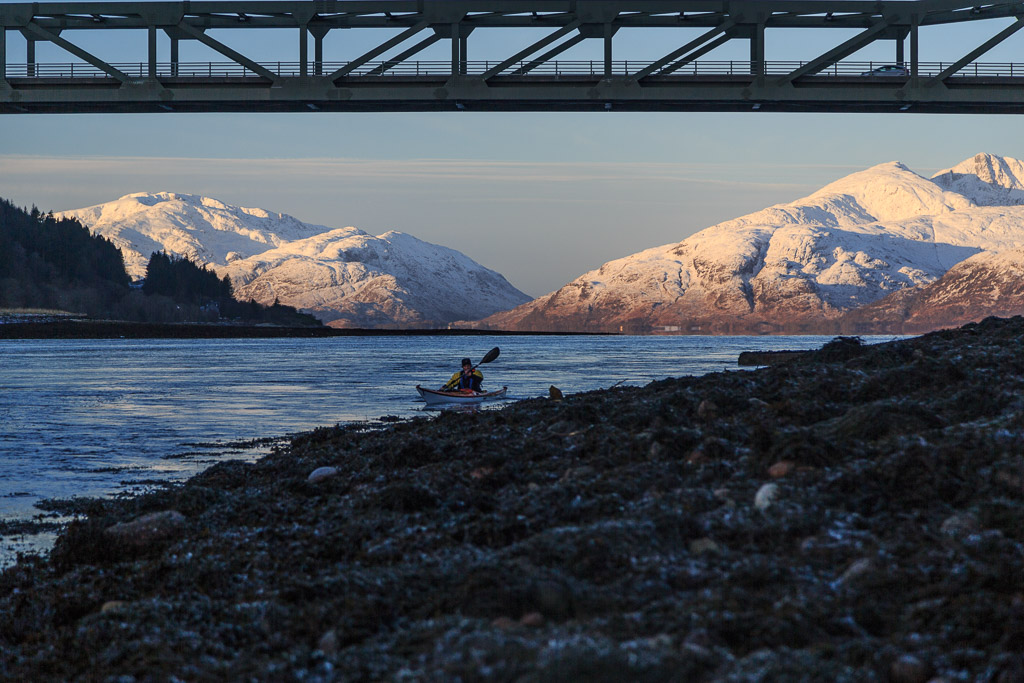 It really was a struggle against the current... 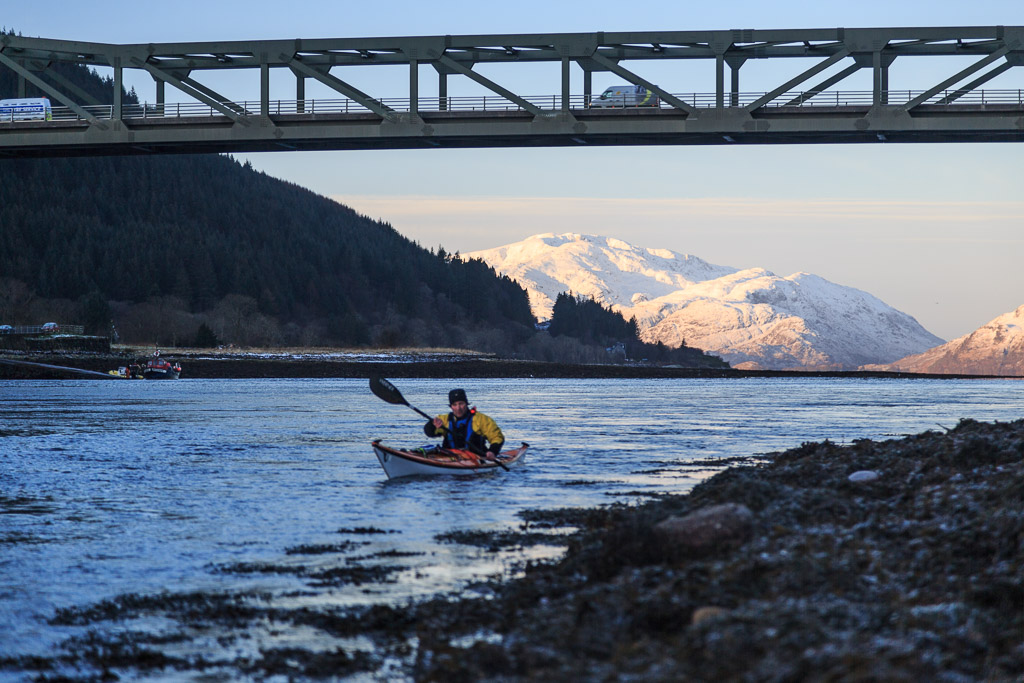 ...where the current was running slower but... 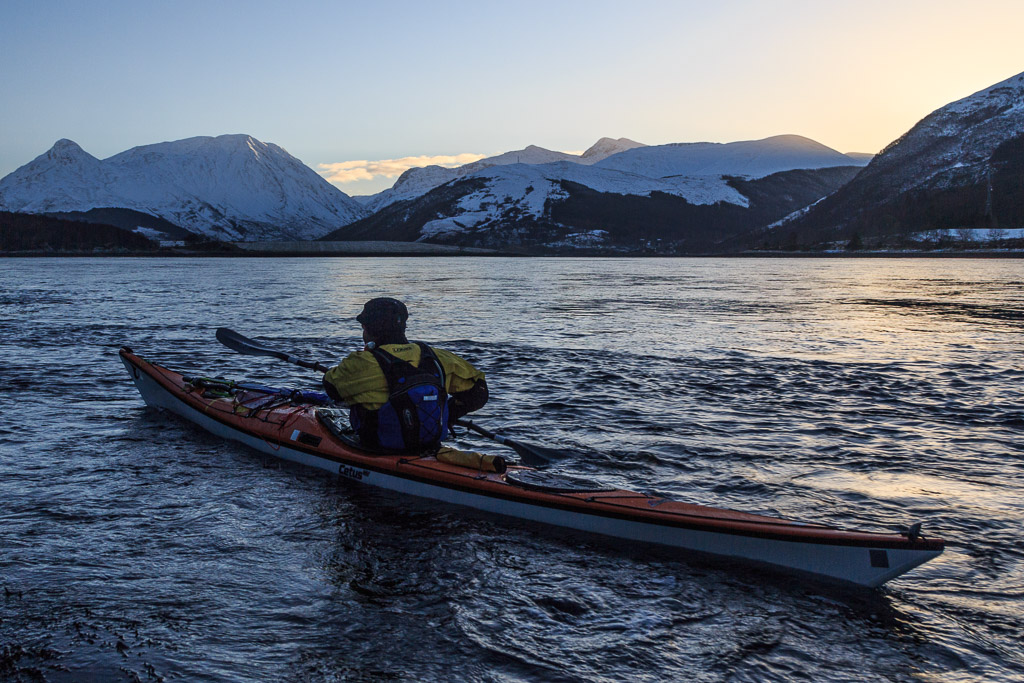 ...it was literally an uphill  battle until we ... 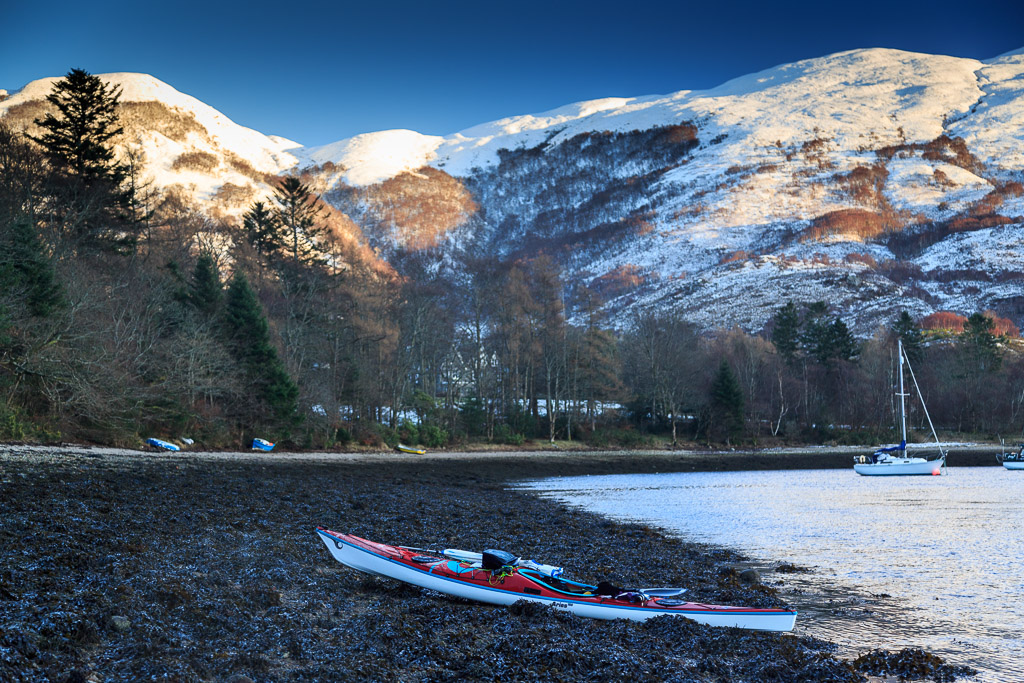 ...reached the calmer waters of the broder loch beyond. After a brief rest we 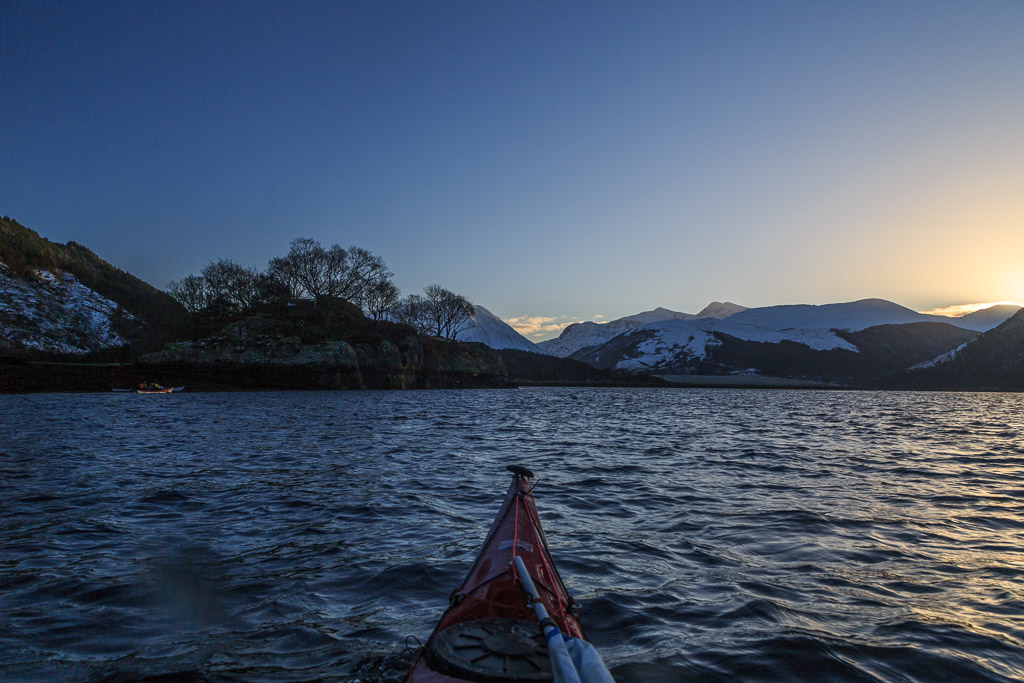 ...set off on our exploration of Loch Leven.

Gradually the sun rose above the mountains and... 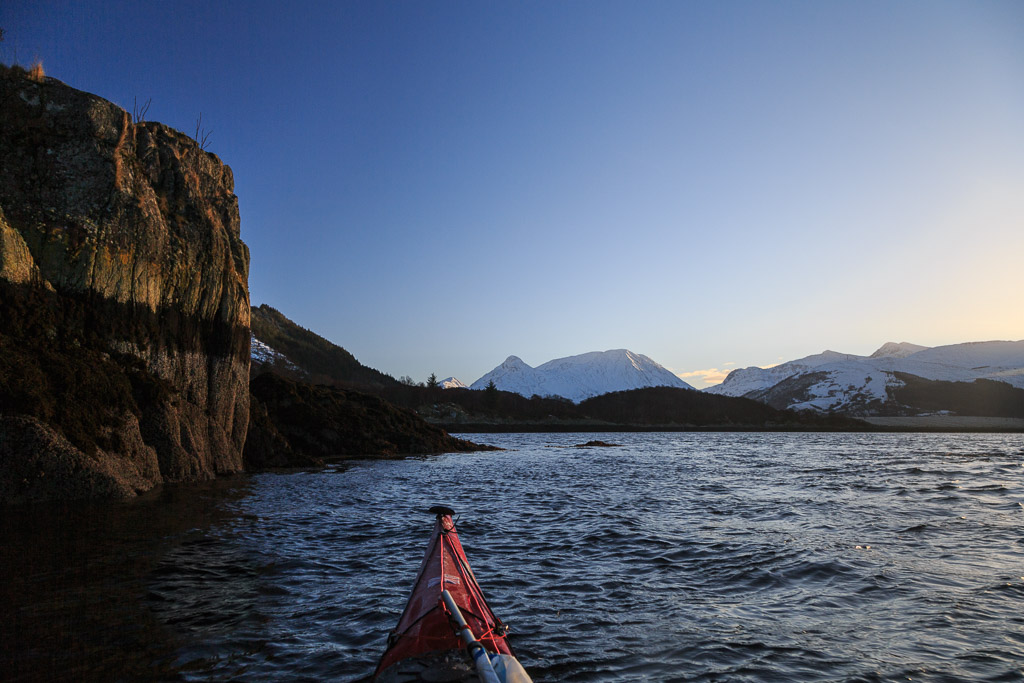 as we rounded the natural rock walls of An Dunan (site of an Iron Age fort) we... 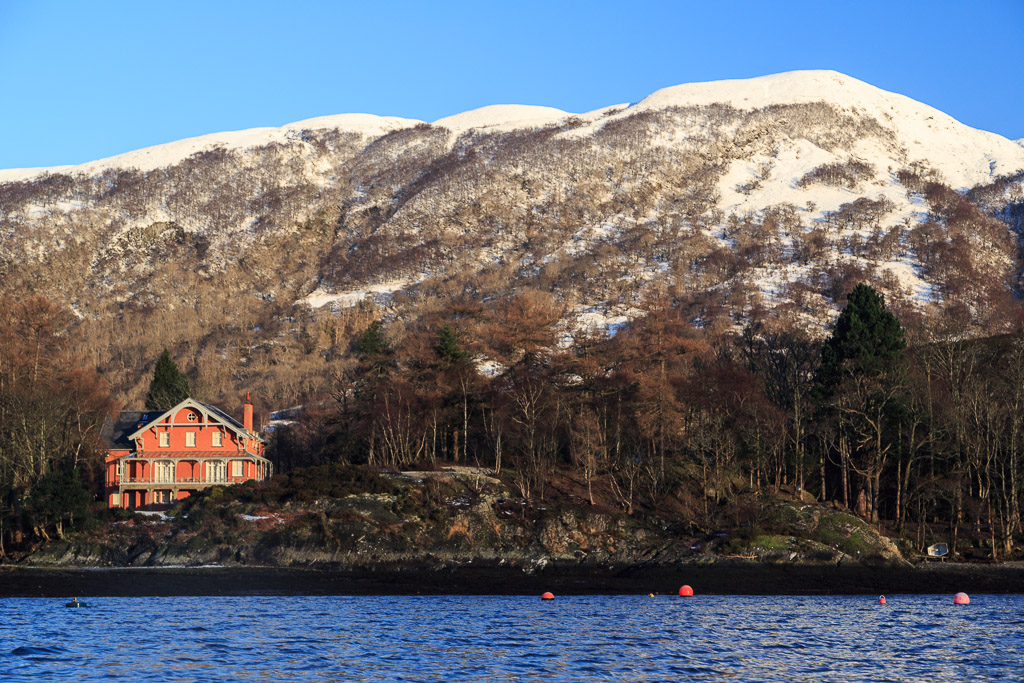 ...entered the natural harbour of Poll an Dunain in full sun.

Posted by Douglas Wilcox at 6:10 pm No comments: