End of day in Carsaig Bay. 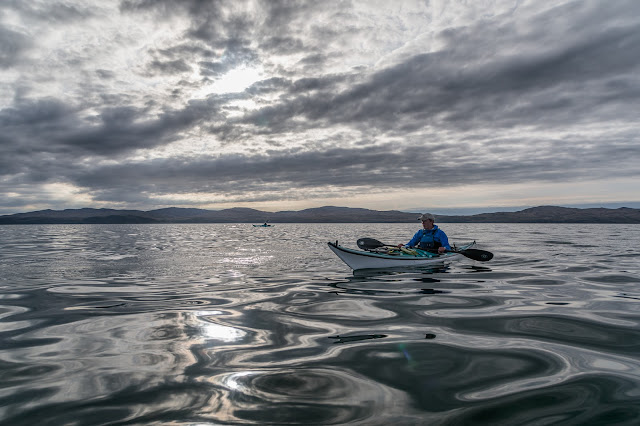 As we left the lonely rock of Ruadh Sgeir the tide was still carrying us back towards Carsaig Bay and as it was nearing the end of our expedition, it was nice to take a break from paddling. The light was beautiful and... 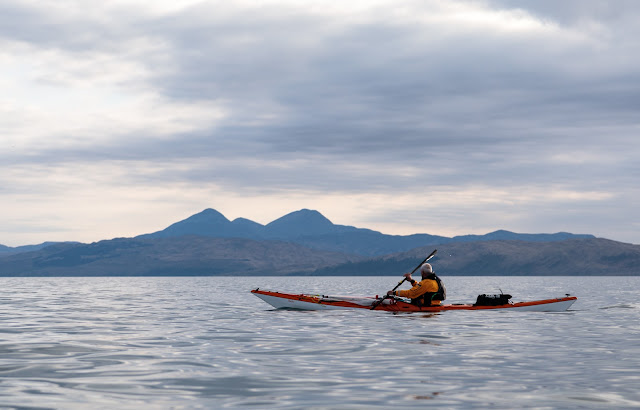 ...we enjoyed views to the Paps of Jura which had dominated the horizon on much of our trip. 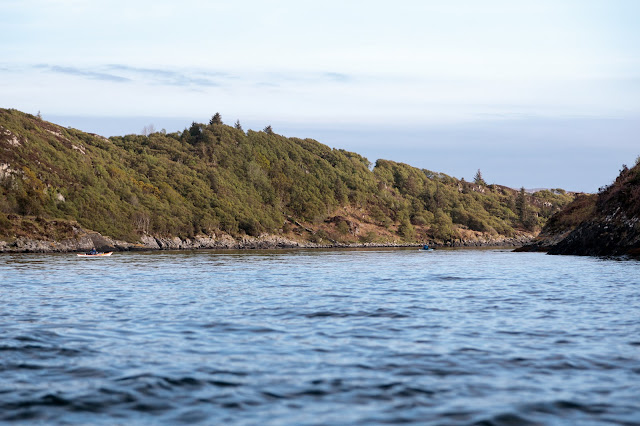 Nearing the end, we broke out of the tide into the sheltered inlet behind Carsaig Island. 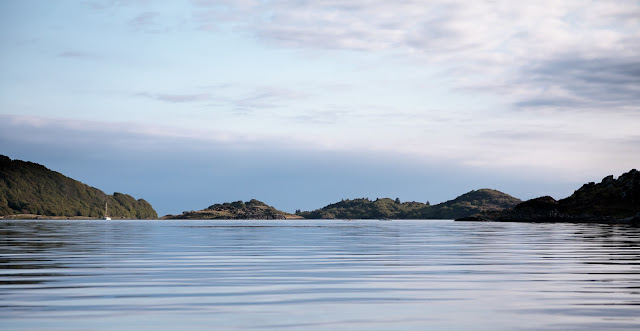 We had to start paddling again but... 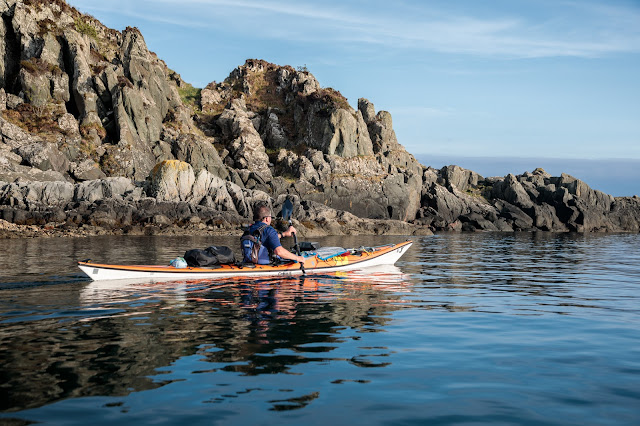 ...the water was calm and we enjoyed the warmth of some late evening sun. 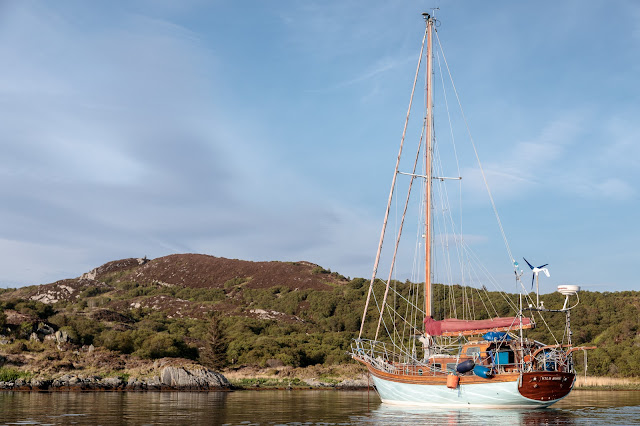 At the SW end of the channel we came across the lovely wooden yacht Wild Rose. We had last seen her in Tinker's Hole on the Ross of Mull and off the west coast of Iona the previous year. 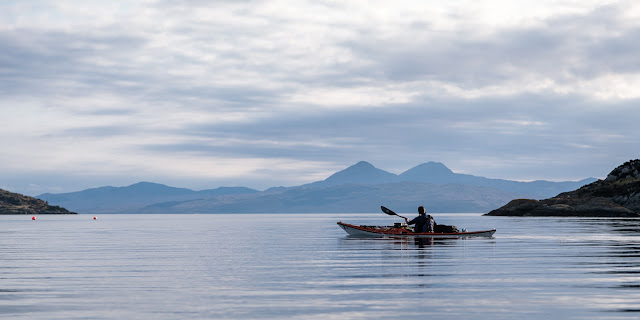 As we cleared the SW end of Carsaig Island, the Paps of Jura briefly came into view for the last time until... 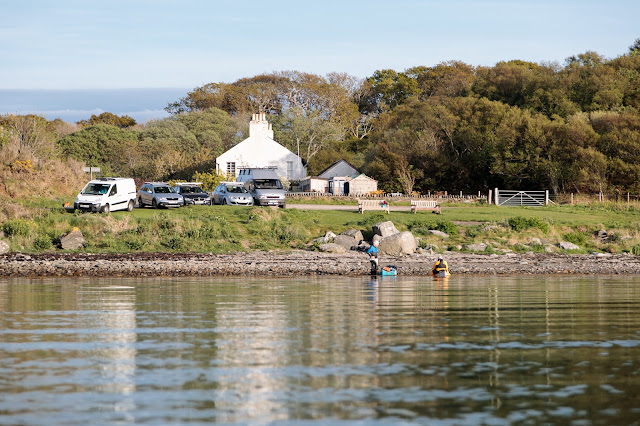 ...our journey came to an end at Carsaig Bay on the Argyll mainland. It was from here we had set off 4 days previously.  Ian, Sam and I had originally intended camping out one last night further down the Sound of Jura... 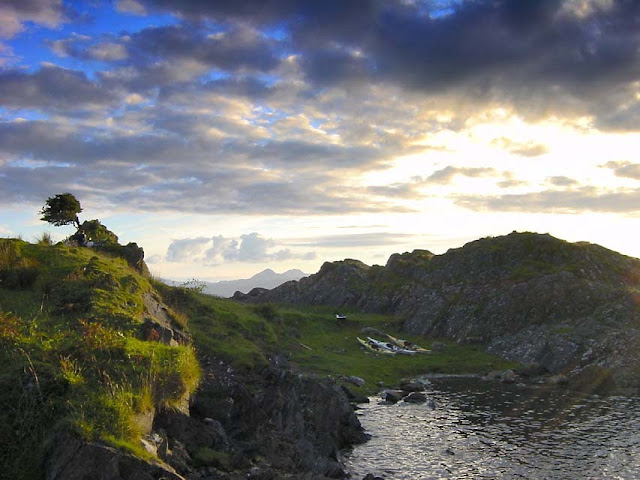 ...(at a delightful spot I had camped at in 2003, see above) but I was done. I was waiting for treatment for a significant health problem and I had run out of steam. I was grateful that Ian made the decision to stop at Carsaig Bay and stay the night at the nearby commercial campsite in Tayvallich. Despite the wonderful location, overlooking the Sound of Jura, I really could not have faced another night and morning of unloading and loading boats.

It was a bittersweet moment, unloading our boats in the sunset for the last time. Sad because it was the end of an unforgettable trip but happy because we were already sharing great memories. 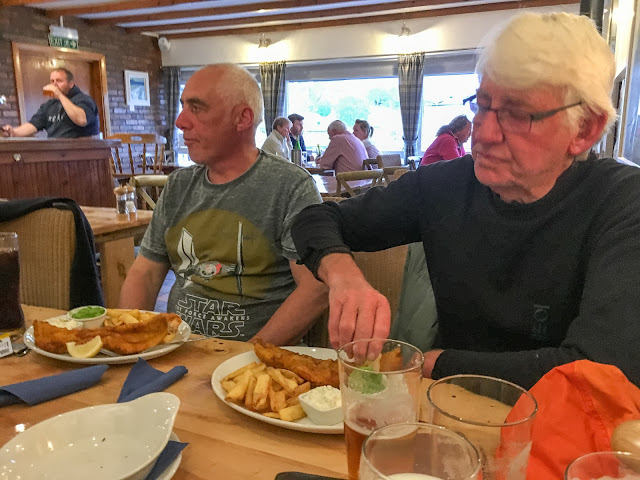 Although Maurice and David were driving home that night, we all had dinner in the Tayvallich Inn. The staff very considerately took our food orders well past their normal last order time (we had forewarned them of our late arrival). 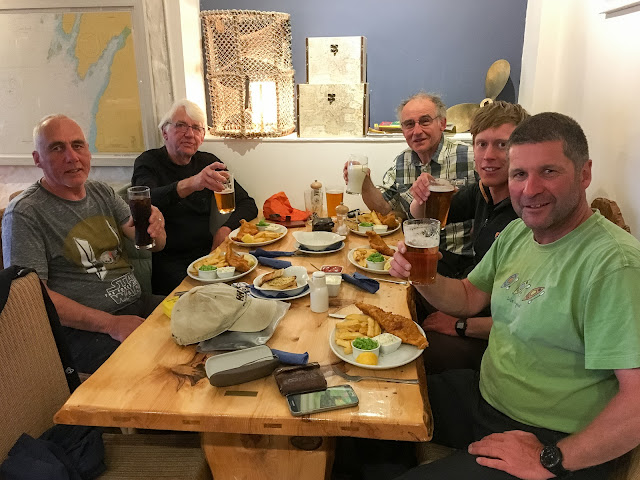 So Maurice, David, myself, Sam and Ian enjoyed our last supper together on this trip. We recounted some great experiences but above all, a successful sea kayaking trip (like so many things in life) is greatly enhanced by those you share it with. 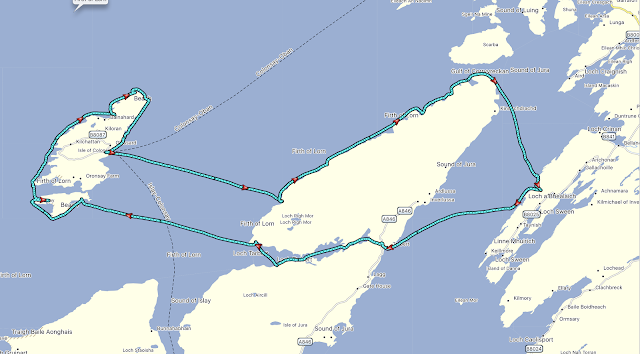 Over the four days we covered 140km on our sea kayaking pilgrimage to Oronsay and Colonsay via Jura. Unfortunately it was to prove to be my only sea kayak camping trip in 2017 but what a trip it was! :o)