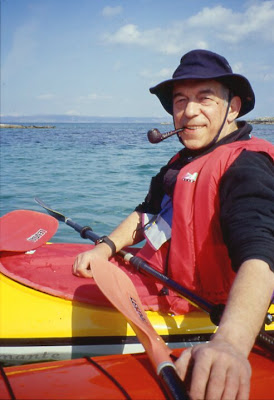 My friend Mike Thomson of Scottish Paddler Supplies has died.

He became unwell while driving back to Scotland with a load of new sea kayaks. I can hardly believe what I am writing, as Mike was a larger than life character who was so full of life and seemed such a permanent part of Scottish paddling life. Who can forget his deep sonorous voice "Hello, this is Scottish Paddler Supplies" when he picked up the phone? His voice sounded like a wonderful deep and liquid sound from the back of some distant sea cave.

When I say he was my friend, I am not claiming any exclusivity, he was a warm hearted and open man who made friends with all his customers. He was most certainly not a "box shifter". He liked to get to know his customers' needs before he would sell anything. He would also lend gear to make sure it was what you really wanted. Afterwards, his customer support, if there was a problem with gear, was quite exceptional in my experience of any retail field.

He also took particular care with newcomers to sea kayaking. He would spend a great deal of time giving advice about any aspect of sea kayaking. I was a complete newcomer when I first contacted Mike and I have no doubt that his sound advice helped me safely on my way. As a result of his approachfullness, he built up a loyal band of customers not just in Scotland but in many other countries across the world.

As a retailer, he was a familiar sight with demo boats and stands at symposia such as the Skye Sea Kayaking Symposium and also shows such as the Perth Paddle Show. Of course Mike was not just a retailer, he also designed and manufactured sea kayaking accessories such as J bars for roof racks and kayak trolleys. These are made of such high quality materials that no doubt they will be dug up and puzzled over by future archaeologists! I tested a group of trolleys on the portage over the rough track from Tarbert on Jura for Ocean Paddler magazine. Mike was so pleased when only his trolley made it over unscathed. In fact, it needed to return to the summit to rescue another boat whose trolley had completely broken! I can still remember Mike's hearty chuckle as he read the article. Mike was always looking for ways to improve his designs and he asked if I had any suggestions for the trolley. He was working on a modification when we last spoke, just before he died. 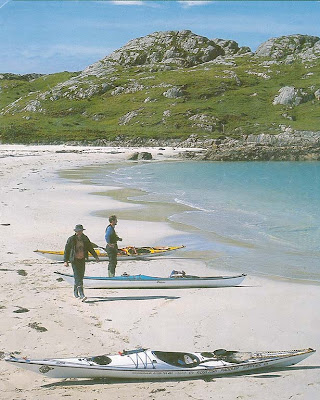 Mike walks over a Coll beach towards an early Quest prototype. Photo by Ronnie Weir.

He was also involved in tests of two P&H prototypes called project X (later to resurface as the Bahiya) and project Y, one of which would be chosen as their new expedition boat. He particularly liked project Y and said it was the one for his customers. He took delivery of one of the first production models which P&H called the the "Cappela Explorer". 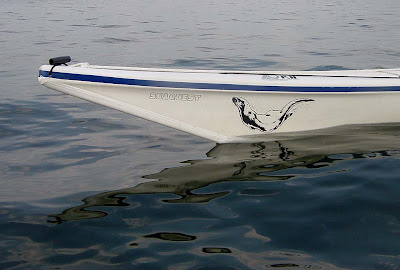 Mike named this individual boat "Sea Quest" but told P&H that the name "Capella Explorer" was just confusing customers because of the existing "Capella" in the range. He suggested they should change the name. The y did and the "Quest" was born! Mike's enthusiasm for this boat did much to ensure the success of the Quest and there can hardly be a Scottish beach that has not been graced by several.

He had a great sense of humour and I can still remember his deep HO HO HOs when we shared a joke. One such joke was Brace-a-Float and remarkably he was still getting enquiries about these as recently as last month!

He started his own paddling career with Fife Sea Kayak Club and over the years he had written articles about their exploits for many magazines. Recently he had written several humorous and lively articles about his trips for Ocean Paddler magazine. He hadn't taken photographs at the time but I had followed in his wake and was honoured when he asked if I could supply some photos to go with his articles.

He was also a volunteer trip organiser for the Scottish Canoe Association and in March this year had organised one of the first ever kayaking trips on Loch Katrine after it had been opened to public access for the first time.

Mike loved all aspects of the outdoors but particularly the sea (he was also a sailor). He passed his sense of respect for the sea and of looking after the countryside to all those whom he came across. He played a great role in the expansion of sea kayaking in Scotland but he was always concerned that people should start off feeling respect for the outdoors. He felt that the environment would not be harmed by growing numbers if participants shared this respect. He was not an evangelist though, he simply showed newcomers his own obvious enjoyment of the outdoors.

The world is a better place because of people like Mike Thomson and it is poorer with his passing. However, Mike helped so many people on the way to enjoying their sea kayaking adventures that his joy of life and the outdoors will live on through them for many years to come. I count myself lucky for being one who knew him.

My condolences to all those who have lost with his passing, especially his family and close friends.
Posted by Douglas Wilcox at 11:56 am 13 comments: