Beauty and the beast at Ballachulish 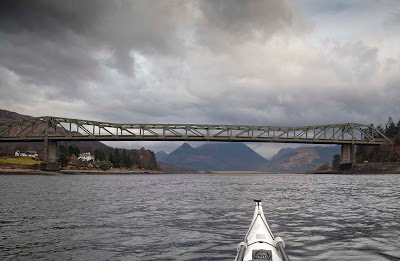 We paddled towards the tidal narrows at Ballachulish which separate Loch Linnhe from Loch Leven to the east. 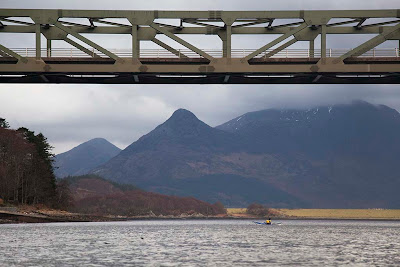 The narrows are now crossed by the Ballachulish Bridge which has been described as the most brutal bridge design in Scotland. Over the years I have grown to quite like it, here its girders contrast with the beauty of Sgurr na Ciche. 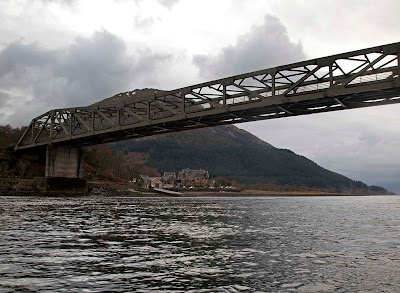 The bridge was completed at the end of 1975 but, before that, a vehicle ferry ran across the narrows from 1903. These were flat bottomed turntable ferries and used the slipways in the shallow water at either side of the narrows. One of the last of these ferries was the Glenachulish. She was built in 1969 at the Ailsa yard at Troon on the Firth of Clyde. She served the Ballachulish crossing until the bridge opened, then she was moved to Kessock and then Kylsku to serve as the relief ferry until those crossings were replaced by bridges in 1982 and 1984. After this she moved to Glenelg for the Skye crossing where she still serves today. The crossing at the peak of a spring tide always provided an entertaining ferry glide.

Not all crossings were entertaining. In 2003, Maureen Macmillan MSP recounted the following in a debate on the Scottish Railways and Transport Safety Bill: "The bill reminds me of an incident from my past involving the Ballachulish ferry on New Year's Day, a bottle of Chivas Regal drunk on the north side and a ferry that could not dock on the south side. The ferry went up Loch Leven and anchored and there was a stand-off with the police. Later, the Oban Times reported that someone had been charged with being drunk in charge of a ferry. The experience was frightening for everyone on board. " 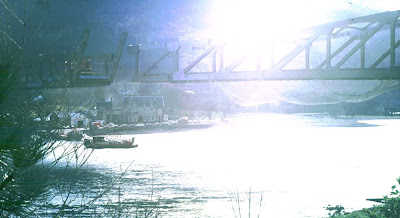 I took this photo at Easter 1975, just as the last section was being lowered into place. You can just see the Glenachulish leaving South Ballachulish. She took 6 cars on her turntable which allowed a fast roll on roll off service. At peak periods two ferries served the crossing and the rule of thumb was, if there were more than 36 cars in front of you in the queue, it would be faster, but less fun to drive the 31km (19 miles) round the twisting, narrow road to Kinlochleven at the head of the loch and back down the other side.

Most of my generation, who spent time waiting for the ferry, appreciate the hidden beauty of this brutal bridge.