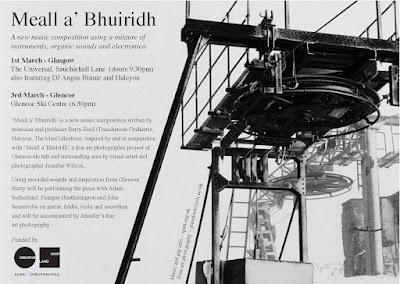 Here is news of performances of a new musical composition accompanied by a display of fine art photographic images inspired by the Glen Coe ski hill. The music is by Spad and the photography by my daughter Jennifer.

The commission was supported by Creative Scotland. 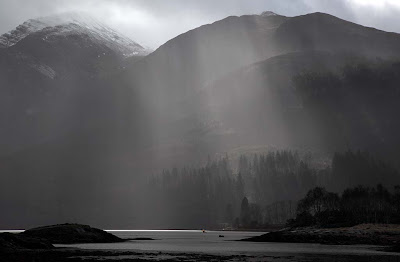 Being a cheapskate, I thought I might head up to Glencoe on Saturday the third and go for a paddle in Loch Leven  then go for a a meal in either the Isles of Glencoe Hotel or the Clachaig before heading up to the ski centre. Anyone fancy coming?
Posted by Douglas Wilcox at 1:51 pm No comments:

Nightfall and landfall in Loch Ryan. 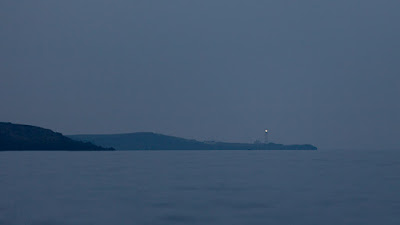 Night was falling as we came to the end of our three luncheon tour of Ayrshire's Atlantic coast. Away to the NW, Corsewall lighthouse had been flashing for some time... 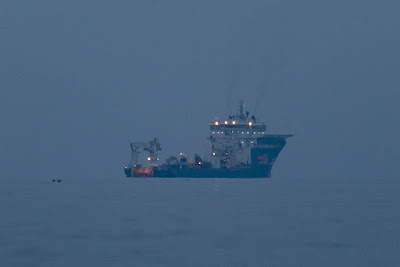 ...as work continued on the flood lit deck of OCV North Sea Giant. 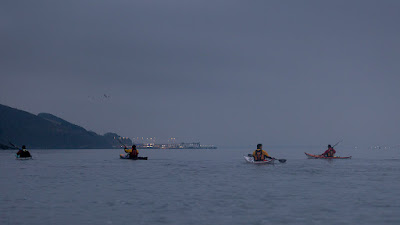 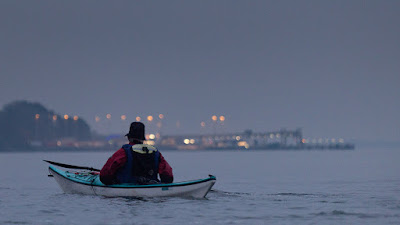 ... the lights of the new Stena Line Cairnryan ferry terminal... 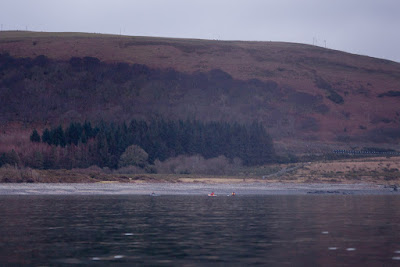 ...before making final landfall at Finnarts Bay. We had just completed a paddle along one of the finest pieces of coast in SW Scotland. 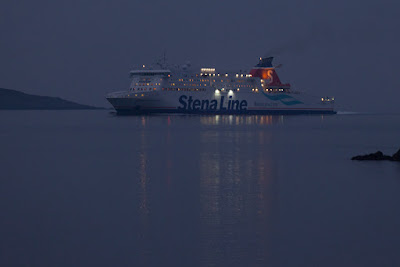 Jim said he would have given 10/10 for trip planning but reduced it to 9/10 because this ferry arrived as we were packing up. We then had a long slow drive home in the convoy of HGVs, which disgorged from her vehicle decks before we got on the road.

This Irish Sea ferry goes by the romantic sounding name Stena Superfast VII. She and her identical sister ship, which goes by the no less romantic (or original) name of Stena Superfast VIII, were launched in Kiel in 2000 and 2001. They are 203.3m long, 25.4m wide and weigh 30,285 tonnes. Their cruising speed is 30.4 knots. They served in the Baltic but were refitted in 2011 in Poland and entered service on the Cairnryan Belfast run in November 2011.

P.S. Winter gales have banked up a steep gravel storm beach in Finnarts Bay. I tried to carry a kayak up this with David but felt a sickening tear in my left "good" knee. I had to drop the kayak and am very grateful to the others, especially Phil, who helped get my gear back to the cars. Thanks guys! :o)

Unfortunately my left knee dislocated a couple of days later and prevented me paddling in the idyllic weather the following Sunday, actually it confined me to the house for ten days. So was this trip along Ayrshire's Atlantic coast worth it? You bet it was!
Posted by Douglas Wilcox at 7:00 am 3 comments: