A banquet in Loch Drumbuie! 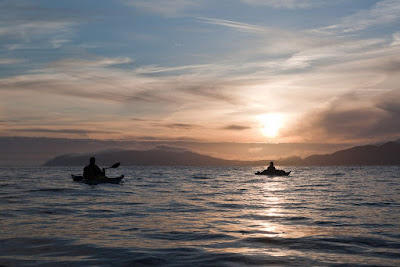 We had now left the Sound of Mull and were paddling east into Loch Sunart. From a line between Ardnamurchan Point to Mull, Loch Sunart winds for 45 km, deep into the heart of the west coast of Scotland. It forms the northern boundary of the Morvern peninsula. 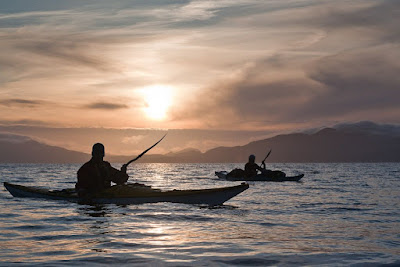 Mist was gathering over the Ardnamurchan hills at sunset. 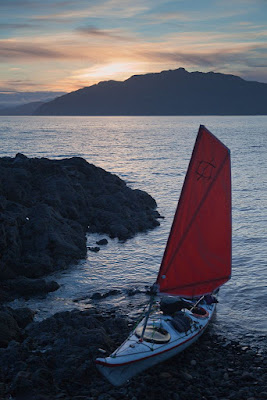 We landed at several little bays on the south shore of Loch Sunart but all were backed by bog or great mounds of tussocky grass and entirely unsuitable for a comfortable night's sleep. In truth, I was not really expecting to be able to camp on the shore of Loch Sunart. I had explored it at leisure on previous visits and had indeed chosen not to camp at Auliston Point before. I also had the security of a midge jacket... I knew of a lovely flat grassy meadow deep within the confines of Loch na Droma Buidhe (Loch Drumbuie) which in Gaelic is Loch of the yellow ridge. There was some dissension in the ranks, as we still had about 5km paddling from Aulistion Point. However, since both David and Phil had been equally unwilling to stop at Auliston there was little more than some grumbling and that was mostly from our stomachs due to the inadequate size of our "large" fish suppers. 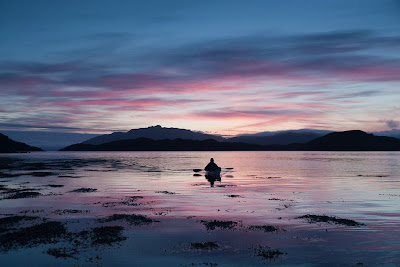 We entered the narrow channel at the west end  of Loch Drumbuie to find ourselves in a windless paradise at sunset. 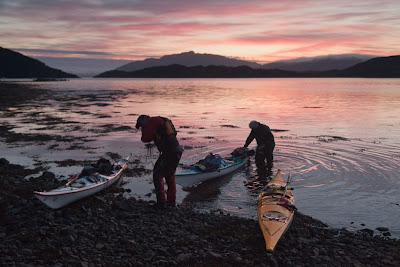 A paradise for midges that is, and we were first second and third courses of their banquet! At least David and I had our midge jackets! Poor Phil fully suffered one of the most savage attacks I have ever encountered! Then I remembered I had a spare midge hood, stashed away at the bottom of my emergency bag. Phil's relief was wonderful. We pitched the tents in near darkness then a remarkable thing happened. The midges disappeared with the last light! We had brought a sack of logs and soon had a fire going on the beach. We cooked our evening meal by the crackling logs and under the twinkling stars. Paradise indeed.
Posted by Douglas Wilcox at 8:17 am 3 comments: