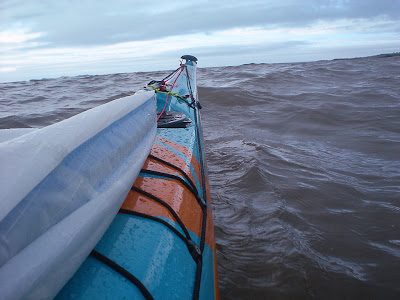 I am lucky enough to be paddling the P&H Aries 155, 2013 model at the moment. I should say straight away that I have it on free loan. In case you think that this may introduce a degree of bias, I have also had free loans of the Rockpool Taran 16 and the Malin Sea Kayaks Gometra this year.

Please note these are just my first impressions, after 5 days on the water. However, the Aries 155 is very similar to the rotomoulded Delphin 155 so you should also read my long term review of it.

In developing the Aries 155 some of the Delphin's features have been softened, particularly the razor sharp chines and double concaves in the bow. However, it is much closer to its RM sibling than most sea kayaks that are produced both in RM and composite forms. Most, like the Valley Nordkapp, are significantly smaller in RM form. Not so the Aries/Delphin, which are of similar size. They share a considerable rocker with squared off stern.The chines are hard at the bow and stern but soften towards the cockpit area.

The Aries 155 is 4.85m long and 0.57m wide. It is 290l in volume. The cockpit and the wide point are set well back. New for 2013 is the smaller rear deck hatch and small rear day hatch with two bulkheads behind the cockpit. Also new are the moulded longitudinal channels for split paddle shafts on either side of the compass recess. These mouldings make the fore deck very stiff, which is ideal if you were thinking of fitting a sail... The Aries comes with the Mark 2 P&H skeg slider. I have previously tested a prototype of this slider and retro fitted one to a Delphin 155, which had a stiff Mark 1 slider.

This was the first time I have tested a production mark 2 skeg and it proved faultless. I was delighted to see a heavier grade shock cord fitted to the skeg downhaul. This will resist the tendency of the previous skeg to lift when planing, especially when  kayak sailing downwind. The hard chines on this kayak are designed to plane and the extra drive of a sail helps you plane if you do not have standing waves in a tide race or suitable surf to catch a wave on.

When P&H first released the Delphin then the Aries there was a lot of hype in the media about how original and how versatile they were. Perhaps unsurprisingly there was then a bit of a backlash and several commentators said they were too specialised towards use in the surf to be considered for allround use, they were unsuitable for beginners and they did not look like proper sea kayaks! This has clearly had an effect on sales of the Aries. At the end of 2012, Geoff from Karitek (my local P&H dealer) told me that no one had requested a test paddle in his demo Aries 155 so he returned it unpaddled! I hung back and produced my long term comparative review of the Delphin 155 in January 2013. What I found was a remarkably versatile day kayak, which was just as good for a beginner in flat water as an expert in the surf. I therefore could not wait to get my hands on an Aries 155! 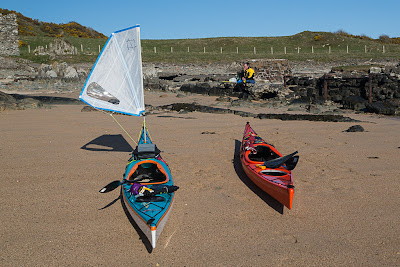 The Aries 155 performs in a very similar way to the Delphin 155 and I refer you to the long term Delphin test above for more detail. 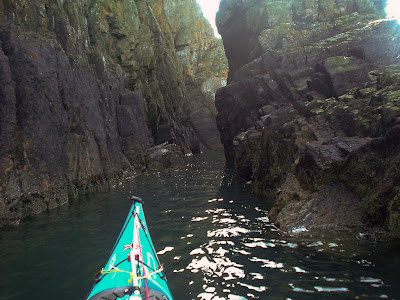 The Aries is just ridiculously manoeuvrable... 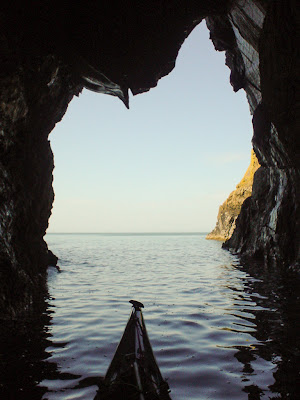 ...and as I will shortly be entering my seventh decade, it is nice to be in a kayak that allows me to twist right round when reversing into caves! 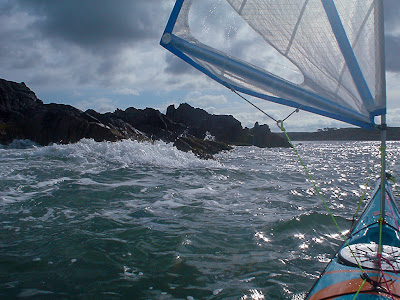 It likes nothing better dodging rocks as the swell rises and falls round the skerries.

There are some minor differences between the Delphin and the Aries, which might be related to the slight differences in the hardness of chines in the bow area. The Delphin 155 slams a little more going out over steep wind over tide waves. The Aries 155 feels a little softer in these conditions and so is possibly a little faster paddling out through the waves. Coming back in through the waves, the position is reversed. The Delphin's hard bow chines encourage it to plane a little earlier than the Aries but don't think the Aries is a slouch, it gets going, catching more waves than either the Alaw Bach or Anas Acuta, which are both renowned for their surf performance. On flat water the Aries cruised at the same speed as an Alaw Bach, comfortably maintaining 6.0 to 7.5km/hr which is the speed at which our group normally paddle at. The Aries, Delphin and Alaw Bach do not accelerate on flat water as quickly as kayaks like the Nordkapp LV. All three also tend to squat on their sterns during flat water sprinting and this limits their top speed to about 10.5km. However, put a little wave into the equation and...

Given some criticism that the Aries is not a "proper sea kayak" I spent an enjoyable day comparing the Aries 155 with the epitome of a "proper sea kayak"...a 2008 Valley Anas Acuta with an ocean cockpit. The Anas Acuta is the original composite sea kayak based on the West Greenland kayak that Ken Taylor brought back to Scotland in 1965. My own Nordkapp LV is descended from that kayak through the Anas Acuta, Pintail and Nordkapp. The Anas Acuta and the Aries are very similar in volume and both share a great deal of rocker. Although they both have chines, the hull plan shapes are very different. The Aries is shorter and wider and the wide point is much further back. 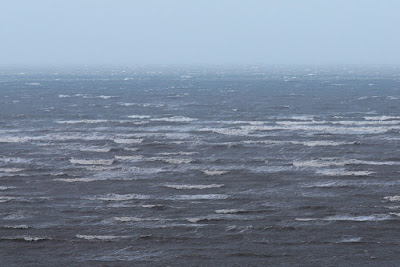 The conditions were F4-5 wind against an ebb tide in the Solway. As the water became shallower, in the gently shoaling estuary, the waves began to break a long way out. I didn't have an onshore photographer but... 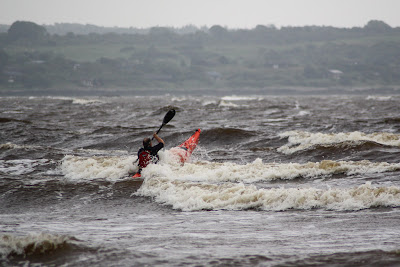 Photo John Black
...conditions were similar to these photographed during testing of the Delphin 155 in 2012. They were ideal conditions to test two kayaks with reputations for handling surf. I have paddled the Anas Acuta many times since 2006 but had only paddled the Aries 155 on three prior occasions. What I found on the water was very interesting indeed.  The Aries 155 outperformed the Anas Acuta in almost every parameter I compared, with the exception of rolling. See table below. 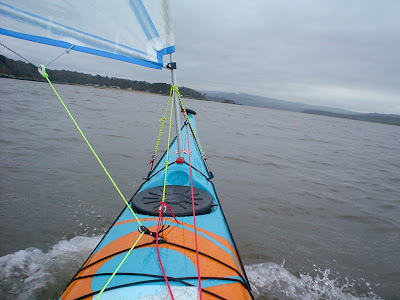 The Aries 155 is also the best all round sea kayak for kayak sailing which I have tested. Although the Rockpool Taran 16 may be faster under sail, it cannot match the Aries' manoeuvrability and fun when kayak sailing in waves. It was not as confidence inspiring either. In exciting conditions, you feel much "closer to the edge" paddle sailing in the Taran 16 than in the Aries 155. The Aries 155 is also a very "stiff" kayak when sailing upwind. It resists the heeling effects of gusts exceptionally well. The addition of a sail takes the performance of the Aries (and Delphin) in the waves to another level. Downwind the sail reduces any tendency to broach and it is easy to drive fast downwind and wave. In winds of force 4 and above you will be overtaking the waves in front. I am suffering from an injured shoulder at the moment but even so, I found I was regularly hitting 18 to 20km/hr when paddle sailing the Aries 155 downwind in waves. 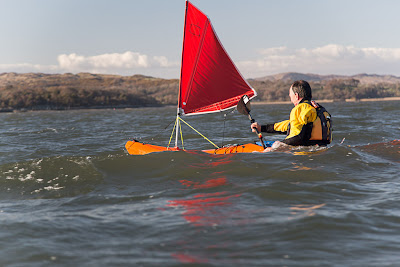 The Aries 155 also makes an excellent photography platform, as long as you put the skeg down before you stop paddling (so that you glide straight). I would not have taken my 5D mk3 out of its bag if I had been paddling the Anas Acuta in these small but steep waves. 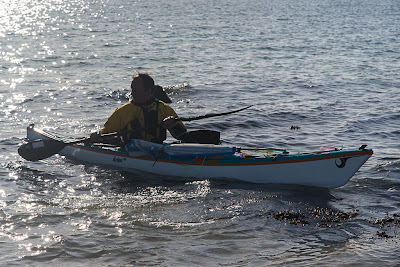 So far the Aries 155 has been paddled by three other paddlers. Here are their comments. Phil has been paddling his Quest for 4 years. Phil's comment about the Aries was "Wow, that's one of the best days I have had on the water, I want one." Tony is a 5* paddler with a Rockpool Alaw Bach and a P&H Cetus and he commented "What a great boat, that one is a keeper. It's so manoeuvrable but it's not slow and it's great catching wind over tide waves." Lastly, Alan has been paddling since 1998 and has  an Anas Acuta and a Nordkapp LV. Alan said "When I saw you with the Delphin last year I laughed. Paddling the Aries was a real eye opener. I now realize how much things have moved on since the Anas Acuta was designed. The Aries also paddles really well with my GP. Anyone want to buy an Anas Acuta?" That's 3/3 votes! 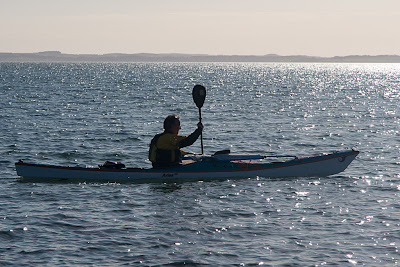 I think P&H, with the Aries (and Rockpool with the Tarans) are to be commended for daring to break away from the traditional Greenland mould that has characterised British style sea kayaks since 1972. I say this has someone who has enjoyably spent most of my paddling time in the Nordkapp LV, which is probably the epitome of this development of the British style. It is no accident that Valley have responded by  producing the two Gemini kayaks, which share many features with the Aries. The Gemini has been produced in two versions (which emphasise either speed or manoeuvrability)  and this may hint that neither is as versatile as the Aries, though I have yet to paddle either.

Like the Delphin 155, the Aries 155 is an exceptional day sea kayak due to its blend of comfort, versatility and  performance. Remarkably, its performance does not come at the cost of its user friendliness. The Aries 155 has something to offer paddlers of all levels and ambitions.

I will give a more considered long term review in a year's time. In the meantime if you are in the market for a day sea kayak, you should put the Aries on your list for a test paddle. If you are on the light side of average then you could consider trying the Aries 150. If you like the idea of this type of kayak but are in the habit of hitting things, then the Delphin in surf spec should fulfill your desires to test the properties of materials. If you are on a budget then I can thoroughly recommend the Delphin in Corelite construction. 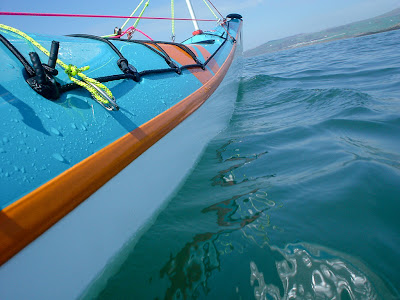