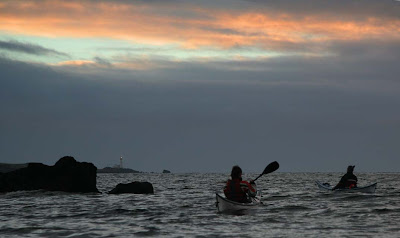 The steady wink of a lighthouse beacon as the winter sun slips into the west is a reassuring sight. The great light of Turnberry stands on a rocky headland that juts into the Firth of Clyde. It is built upon the sad ruins of Turnberry Castle, which dates from the 12th century. 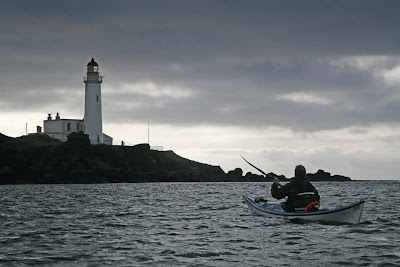 Only the stump of the castle, seen here in front of the lighthouse, now remains. In its day, it was a magnificent stronghold which was built over an inlet of the sea. A portcullis could be lowered after a ship had entered this sea gate. A reconstruction of the castle in its heyday can be seen on the local town of Maybole's website. The castle was probably the birth place of Scotland's King Robert the Bruce in 1274. He was of Norman decent and it is thought that the name Turnberry has Norman French origins: "Tourney Berg" or castle of the tournaments. Nowadays there is not a great deal of jousting but great golf tournaments are held here during the Open Championship. This will next be held at Turnberry in 2009. The lighthouse is situated just behind the 17th tee and, in previous Open Championships, it has featured in a favoured TV vantage point that beams the view of tee and also distant Ailsa Craig to a worldwide audience of golf fans.

Although spring tidal flows in the lower Firth of Clyde are generally less than 1 knot, the waters off Turnberry Point can be quite lively, even in otherwise calm conditions.
Posted by Douglas Wilcox at 7:31 pm No comments: