The poetry of distant mountains' names. 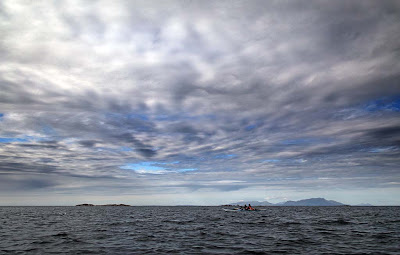 Leaving the Cairns of Coll, we paddled down the NW coast of Coll. As we did so a cold SE wind got up as a front moved in across the sky. We knew that this would bring rain and force 5 winds but that it would pass through within 24 hours. We had come to this area in search of the pod of orcas which yachting friends has recently spotted here. We left without seeing any but sharp eyed Jennifer drew our attention to two breaching minke whales. Fantastic stuff! 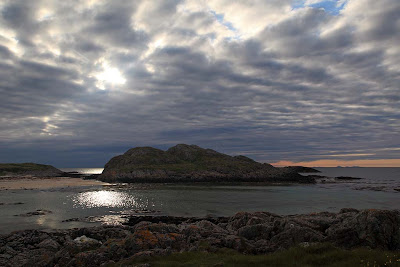 We found this bay, which was protected by an offshore island. Magicseaweed.com had predicted a surf height of 4.5' for the next day, so it would make for an easier launch than some of the bigger surf beaches. 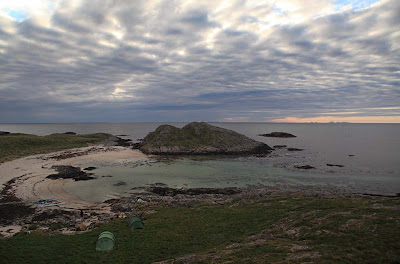 We set up camp with the distant mountains of Barra and South Uist in the Outer Hebrides breaking an otherwise empty Atlantic horizon. 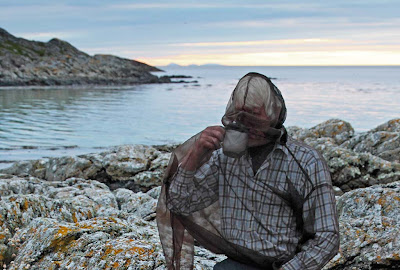 A disadvantage of such a sheltered spot was that the entire local midge population joined our evening meal in what proved to be a feeding frenzy, until we donned midge hoods and jackets. Fortunately our midge jackets still allow you to enjoy a cup of coffee in relative peace. 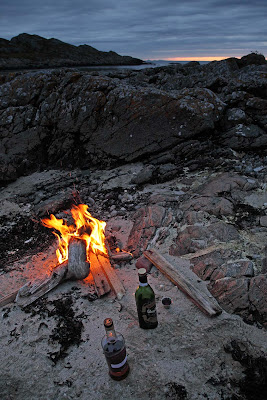 We then set up a little heart warming. 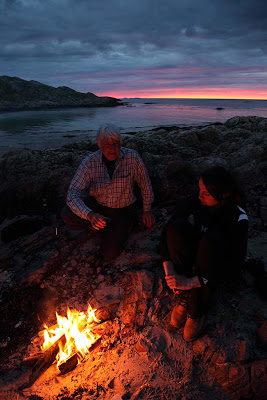 Fortunately as the breeze got up, the midge attack lessened and we were able to emerge into the night from our jackets like giant insects casting off a chrysalis. The aurelian paddlers of Coll were now masters of the night again and not the pesky Culicoides impunctatus. 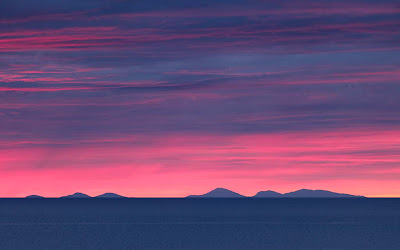 As we enjoyed our Bowmore and Glenfiddich, the sun slowly went down behind the hazy blue mountains of South Uist. These lay 80km distant, over the now dark Sea of the Hebrides. From the left, we saw Beinn Ruigh Choinnich 276m, Triuirebheinn 357m, Stulabhal 374m, Beinn Mhor 620m, Beinn Corradail 527m and Hecla 606m. We pondered the poetry of their names as the pink clouds slowly faded to ruby red and their summits disappeared into the night.