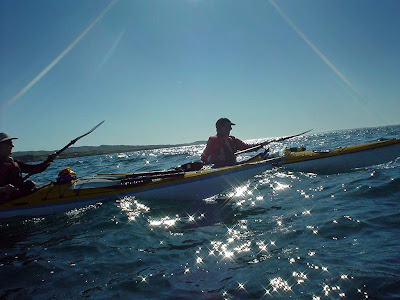 If we had set off to round Ardnamurchan from Paradise Beach, we would have hit Ardnamurchan Point with a force 4 north wind against the peak flow of a north going spring tide. It would not have been particularly pleasant for Phil. By taking time out for an evening meal in Laorin Bay, the wind had dropped to force three and I reckoned that we would hit Ardnamurchan about 30 minutes after the tide had to to flow south again.

We decided to go for it and avoid that 7km walk from Kilchoan over to where we had left the car on the north of the peninsula! We set off for Ardnamurchan Point, 11km due north across the Sound of Mull. 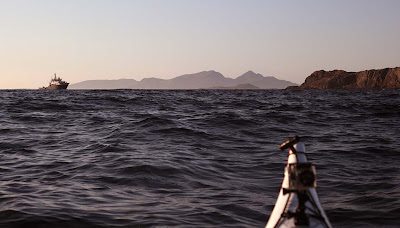 On the way across the Sound of Mull, we spotted a familiar outline approaching. It was the Pharos, the Northern Lighthouse Board maintenance vessel. 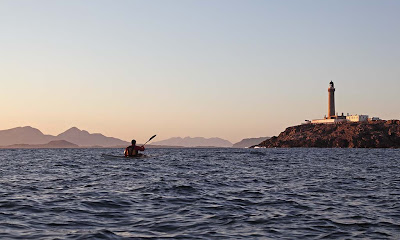 We approached Ardnamurchan as the sun was setting. Muck, Rum, Skye and Eigg lay beyond the point. 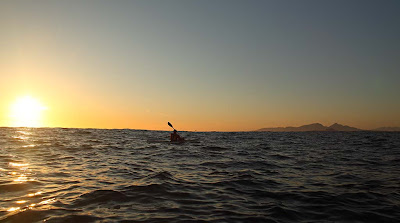 Huge swells were coming in towards the point and the sun sank below the "horizon" several times before it finally disappeared. It was an incredible experience to be off the most westerly point of Britain at sunset. 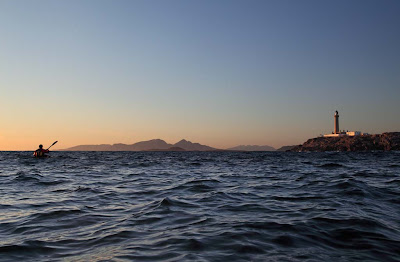 Despite the favourable conditions, it proved to be quite lively round the point, particularly on its north side.

There is now a 20 minute gap in the photographs!