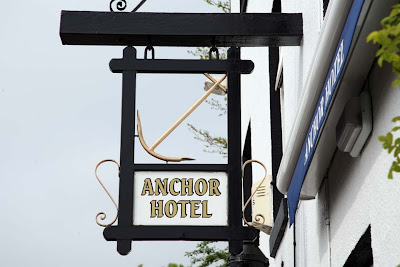 On our recent trip to the delightful Colvend coast of the Solway, one of our destinations was the Anchor Hotel at Kippford. Way points are an important feature of sea kayak navigation and what could be better than a way point which offers the prospect of liquid sustenance? 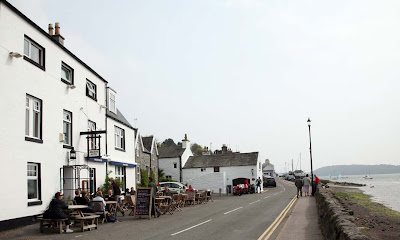 The Anchor Hotel is conveniently located by the sea wall which protects Kippford from winter storm surges. There is a handy public slipway about 100m further along the road. To avoid a muddy exit it would be best to time your arrival for about two and a half hours before and after HW.

The Anchor and the Whim Cottage, which is at right angles to the road, date from about 1780 and are the oldest surviving buildings in the village. Kippford was founded on paper making, quarrying, its port and shipbuilding for trade with Newfoundland. The shipwrights received two drams of whisky a day as part of their wages. One of the biggest ships launched in Kippford was the Balcary Lass, built in 1881. Unfortunately she was lost at sea in 1883 while carrying coal to St John's.

The 7 kilometer detour from the mouth of the Rough Firth up to Kippford would have meant we would have missed the favourable flood tide round the next set of headlands to Sandyhills Bay. The Solway has some of the strongest tides in UK waters and once the ebb started, the force 5 wind against tide conditions in the shallow water would have been horrendous. As it was, we found the headlands to be quite rough enough with the tide going with the wind!

So the intrepid test team had to forgo testing the Anchor Hotel straight from the kayak. We visited later, on the shuttle run back to the other car at Abbey Burn Foot. We therefore cannot comment on how the Anchor staff would react to sea kayaking wear but judging by the number of motor bikers, in a variety of colours of leathers, there should be no problem. An excellent array of beers, spirits and soft drinks was available, including my preferred quaff of chilled Guinness. 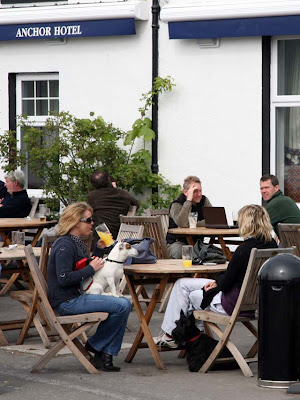 Tony and Billy examining the trip photos on my notebook.

We chose to sit outside and watch the world go by. Not only were there scores of motor bikers parading on the promenade, it was an open sailing regatta for RS200, Enterprise and National 12 dinghies. It was quite entertaining watching some of the asymmetric RS200 dinghies wobbling up the Firth on a dead run. 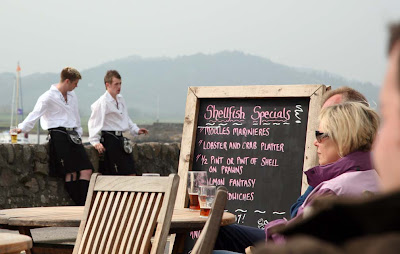 The Anchor also serves a variety of food. Where else but Scotland would "salmon fantasy" be on the menu?

All in all, the Anchor Hotel is another highly recommended sea kayaking pub!
Posted by Douglas Wilcox at 9:13 am 2 comments: