When we left King's Cave we followed the coast of Arran south towards... 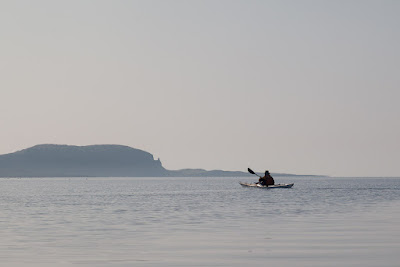 ...the Doon and Drumadoon Point. 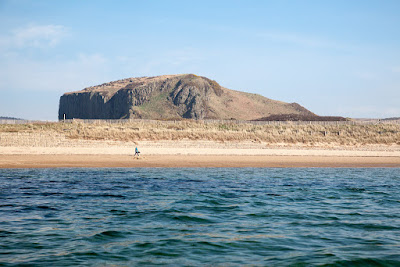 The Doon is a remarkable rock formation that was used as a fortified settlement in the Iron Age. Geologically it is a 25 to 30m thick sill, which is a composite of quartz-feldspar porphyry and tholeiitic basalt. It was at this point that we were aware that we had aroused the interest of a number of dog walkers. One was watching us intently through binoculars. 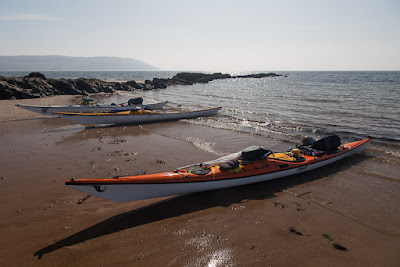 We decided to land on the lovely strand at Drumadoon Bay near the village of Blackwaterfoot to partake of our first luncheon. 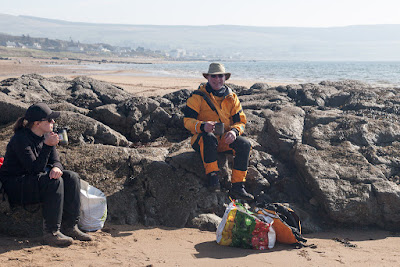 However, no sooner had we landed than a 4X4 vehicle drove up and parked on the dunes facing us and the female driver trained her binoculars on us. There were now four female dog walkers surrounding us and another female with binoculars was hiding in the dunes above us.

Finally, one of the women (with two large dogs) plucked up the courage to march up to us. The dogs were friendly enough but stuck their noses in our bags stealing our food.

"You can't camp here again!" she blurted out. "We know it was you who left your tents and a mess up in the dunes." Her strident accent clearly hadn't been honed by a childhood on Arran!

I didn't have my hearing aids in and although I had heard her perfectly well, I feigned deafness and asked her to remove her two dogs from my lunch as I found their behaviour objectionable. In the meantime one of the hounds attempted to pee on my luncheon bag then crapped at my feet. Fortunately, the other hound took a dislike to my finest Arran Blue cheese and bolted. My verbal assailant then ran off after it.

After what was left of our luncheon, we prepared to leave with eyes still watching our every move. We were pretty sure that they would check our lunch spot for any scrap of litter. We debated whether to write a rude message in the sand but decided to leave the beach as we found it, in case an innocent child might come by and be corrupted. We carefully stepped over the dog crap and made our way back to the kayaks.

From 200m out at sea, we turned to see our recent luncheon spot being closely inspected by several women and half a dozen hungry dogs. They found nothing (we had left behind).

Farewell Blackwaterfoot (watch your feet).
Posted by Douglas Wilcox at 7:00 am 5 comments: