Round the Mull of Oa. 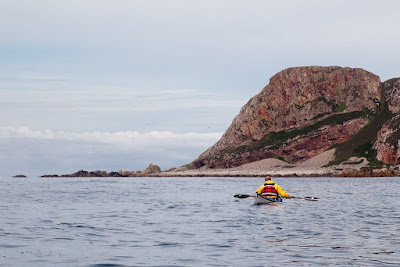 We now approached the great rock blade of Sgeirean Buidhe, which lies in the centre of the SW coast of the Oa peninsula. On another trip earlier that year, we had encountered a major tide race off these rocks but on this day, Tony and I zipped past the headland on relatively smooth water before... 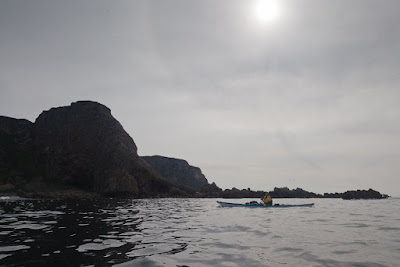 ...breaking out into the eddy behind the point. 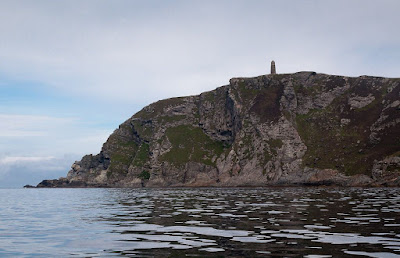 Ahead lay the Mull of Oa itself. It was still 2km away and is topped by the prominent American Red Cross Monument. It was erected in 1920 in memory of those who died when two troop ships, the Tuscania and the Otranto were lost off Islay in 1918.

The sharp eyed might notice the dark line on the horizon off the point, with white water licking the dark rocks. We were fortunate that there was no wind because by the time we got there the race was rushing westwards with standing waves 2m high. There was no escape inshore so we gripped our paddles and paddled straight into the race. We lost sight of each other in the troughs then when we cleared the headland, we battled northward against a south going eddy... 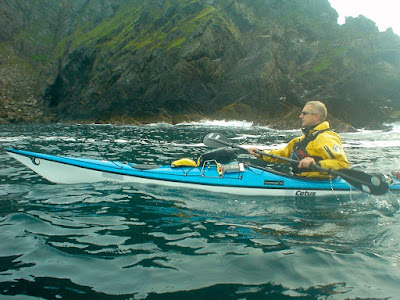 ...which was making its way down the west coast of the Oa. We breathed a huge sigh of relief. We were safely through the tides and now we could enjoy paddling what is probably the best bit of sea kayaking coast on Islay...the west coast of the Mull of Oa.
Posted by Douglas Wilcox at 7:00 am No comments: