Ready for some windy fun on the Clyde.

Saturday's forecast for Troon, in the Firth of Clyde, showed that the predicted gales were not expected to arrive until well into Saturday evening. The surf at Machrihanish was predicted to be 9.5 feet in advance of the arrival of the approaching Atlantic low pressure system. Tony and I decided to nip out to Lady Isle, which lies about 4km off Troon Point. However, rather than launch at Troon, we decided to take advantage of the southerly winds and swell and a flood tide and so launched a little further south than Troon.... 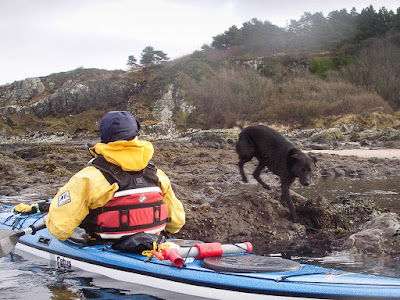 ...some 30km south to be precise! Nonetheless, we reckoned we could still be off the water by the back of 4pm, before the worst of the wind arrived!

Using a car or a ferry to get upwind before a downwind paddle may not be very environmentally friendly but it sure is a lot of fun! Tony's wife kindly dropped us off at the Swan Pond car park in Culzean Country Park and we trollied our kayaks down to Maidenhead Bay. Tony's dog, Bob, was extremely reluctant to be left behind and ran out onto the rocks of Barwhin Point, where he leapt onto Tony's rear deck as we passed by. Unfortunately he slid off the other side. It's just as well he likes a swim.

Leaving Barwhin Point and Turnberry lighthouse behind us, swell was already making its way up the Firth of Clyde. 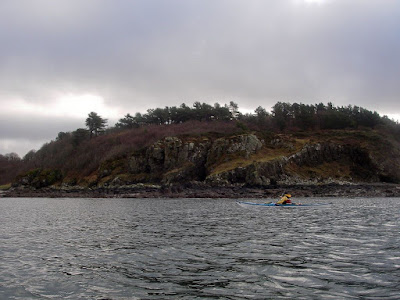 The sun soon broke through the morning cloud and mist and... 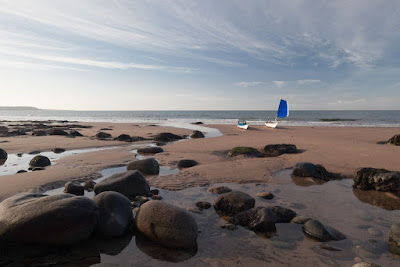 ...by the time we stopped for first luncheon, at the north end of Culzean Bay, we were in full winter sun. Overheard, parallel streams of cirrus clouds in the jet stream predicted bad weather in 12-36 hours... ...so my Flat Earth sail was rigged and ready for some action!
Posted by Douglas Wilcox at 9:56 pm No comments: