Coming and going and leaving a wake at Kirkcudbright. 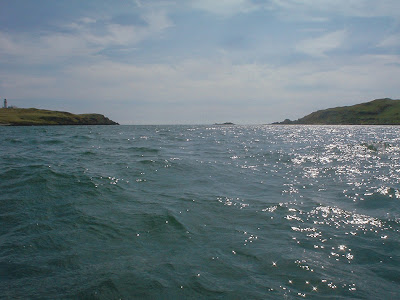 Behind us, the wind was funneling through The Sound between Little Ross and the mainland and it was with... 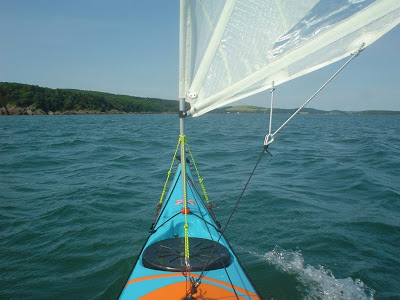 ...great anticipation that we launched the sails. We were soon averaging 9km/hr and hitting 19km/hr when planing on a wave. This return trip was going to be a much quicker than the outward trip, when both wind and tide were against us and we had averaged just 5km/hr. 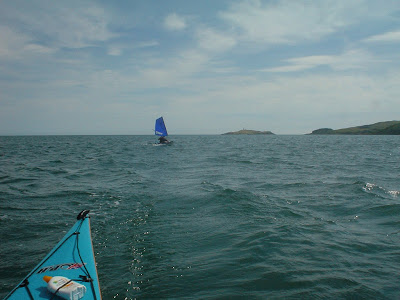 We were making such speedy progress that we were leaving a definite wake behind us. It soon became apparent that Tony's Alaw Bach was planing for much shorter bursts than the Aries. We had noticed this previously in Fleet Bay and now Tony, Mike and myself have all replaced our Alaw Bachs with Aries kayaks. The Alaw Bach is a superb sea kayak but for some reason it is not so suited to paddle sailing as the Aries. 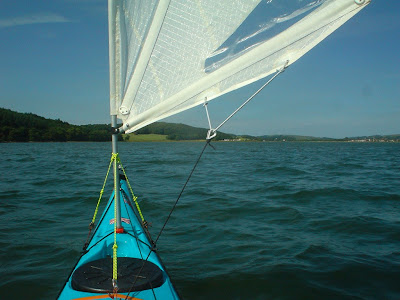 As it was just coming up for high water we did not need to keep to the narrow buoyed channel which... 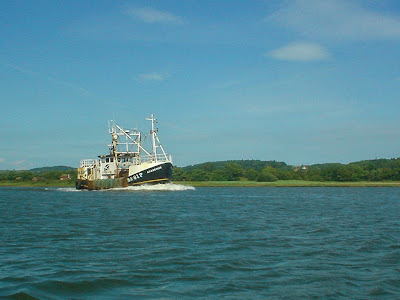 ...was just as well as the scallop dredgers from Kirkcudbright were making their way out to sea, Proud as we were of our wakes we couldn't quite match the wakes of these stout vessels. 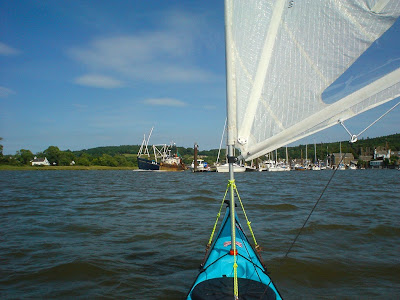 Approaching Kirkcudbright* harbour, we kept out of the fishing boats' way by keeping inside the end of the marina pontoon. 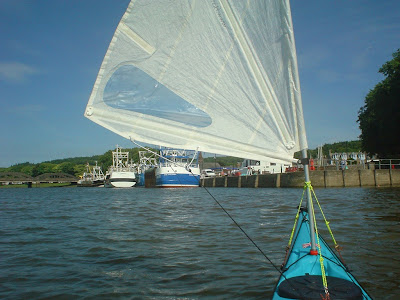 Once past the marina we made a quick sprint for the slipway before the remaining fishing fleet departed. 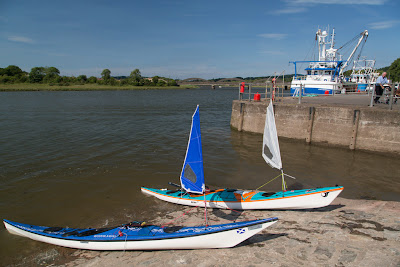 We arrived exactly at high water and so the top of the harbour slipway was dry and not too slippy. If you use this slipway in the wet be careful as it is both steep and slippery. Just a few weeks later than our trip a man slipped and suffered a nasty head injury. 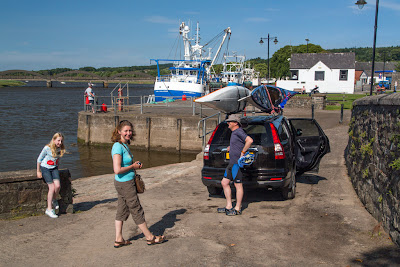 Tony's wife kindly brought the car round and we only had a few feet from water to car roof rack! 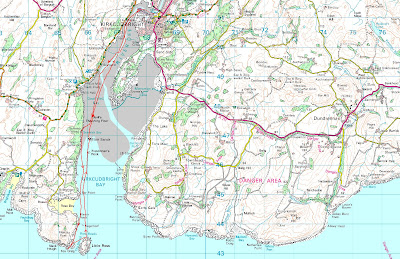 Although we had not been able to paddle round the coast past Abbey Head (due to the live firing at Kirkcudbright Range) we had a most enjoyable paddle of 18.4km in Kirkcudbright Bay and Little Ross was well worth a visit. The contrast between the enclosed tidal River Dee at Kirkcudbright and the lively conditions in Little Ross Sound at the mouth of the bay could hardly be greater. If you just wanted some park and play in the Little Ross Sound tide race choose a spring tide (HW will be about 1300 in summer) on the ebb against a S-SW wind. The nearest launch place to park easily is Brighouse Bay. It is an 8km round trip to the Sound and back. Take a folding trolley as the tide goes out in Brighouse Bay for 600m. Remember that this fun little race will carry you out into the main south west going Solway ebb which runs at 4 knots springs. This will take you to a fun filled rocky landfall at the Burrow Head tiderace, some 21km away across the mouth of Wigtown Bay.

* A phonetic note for non Gallovidians, Kirkcudbright is pronounced Kir-coo-bri. It means the church of St Cuthbert.