A nice shade of grey, in Hunter's Quay 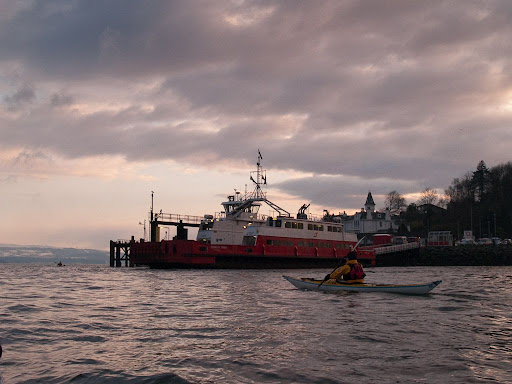 We crossed the Holy Loch and arrived at Hunter's Quay just after MV Sound of Sanda had landed and was offloading her cars. We quickly made our way round her stern (that would become her bow) and found ourselves paddling below more fine Victorian villas. Hunter's Quay was established in 1816 when James Hunter bought the local Hafton Estate. He built a quay in 1828 and extended it to a pier in 1858, as other people moved into the village and built villas there. The last steamer called at the pier in 1964. Then in 1973, Western Ferries bought the pier and opened up the frequent sailings to McInroy's Point at Gourock. 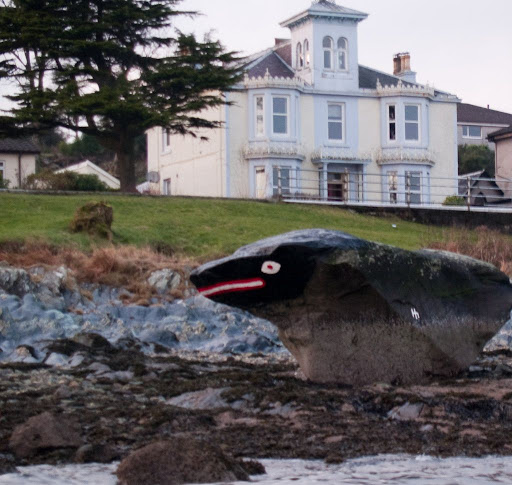 On the beach below a large villa we came across "The Jim Crow". The rock has been painted like this for more than a hundred years but during the night of 21st June 2009, it was painted over all in grey. This caused much local debate and was reported in the Dunoon Observer. Some people think the rock just looks like a crow. Other people think that the name refers to the "Jim Crow laws" that segregated black and white people in the USA from 1876 till 1965.

As you can see, The Jim Crow has since been restored. I don't know what American servicemen from the Holy Loch thought of it. Maybe it is just a crow but it's not a very attractive crow. Just because something has been there a long time does not make it right. Neither does the fact that many may not appreciate its significance to others. I certainly am not one for overzealous political correctness (I call things black and white boards, not chalk and pen boards) but in this case, I think the rock, and Hunter's Quay, would look better if it were a nice shade of grey.
Posted by Douglas Wilcox at 4:44 pm 4 comments: