From Kilchattan Bay we went round Kerrytonlia Point to the east coast of Bute. The view stretched away to the East Kyle and the mountains of Cowal beyond. 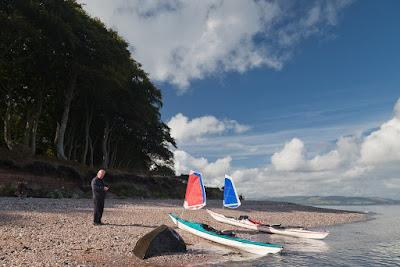 After a while we stopped at the north end of Kerrylamont Bay. We spent time talking to a gentleman who had retired to this lovely spot. Sadly his wife had died shortly after their arrival on Bute but he found solace walking through the island's varied landscape. 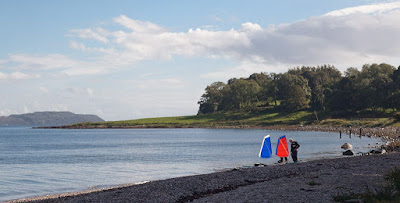 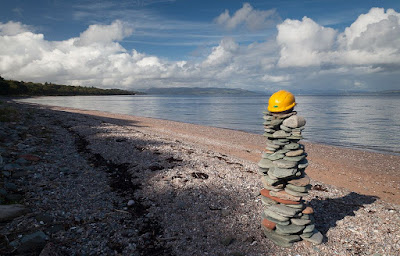 ...and extended far to the north, hinting at the presence of a great estate. We added a plastic helmet to a cairn that had been built below the high watermark. It's existence would be transitory as its foundations would be undermined by the first autumn gale. 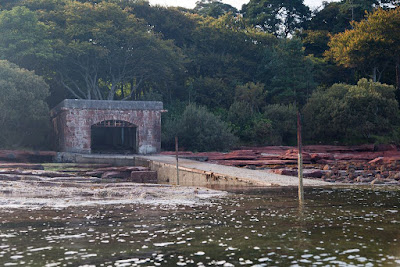 We paddled on until we came to this pier and boathouse. This was our cue to paddle a little way offshore... 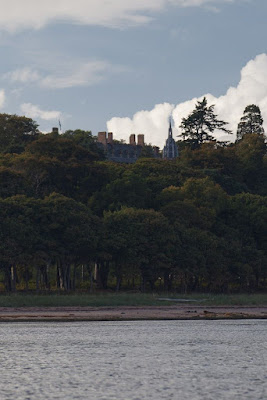 ...and there above the trees, we could just see the Gothic roof tops of Mount Stewart, the ancestral home of the Stuarts of Bute. It replaced their previous residence, which was destroyed by fire in 1877. Successive Marquesses of Bute worked on the house but it was only finally completed in the late 20th century. It is probably one of the finest Gothic mansions in Britain. It is now a popular wedding venue for the great and the good due to the privacy provided by the 300 acres of gardens, woodland and mile long drive.

The gardens were laid out by the 2nd Earl and developed by the 3rd Earl who went on to be one of the founders of Kew Gardens in London. He was also British prime minister in 1762. The 2nd Marquess built the Bute Docks in Cardiff in 1839. The 5th Marquess was a keen ornithologist and bought St Kilda after the evacuation of its population in 1930. He gifted the islands to the National Trust for Scotland in 1939. The current 7th Marquess won the Le Mans 24 hour race in 1988 and has recently completed the interior of the chapel (you can see the spire above the trees). The Bute family tree makes interesting reading.

So what of the headline "Cuiridh mi clach air do chàrn."? Roughly translated that is "I'll put a stone on your cairn".