Ailsa Craig and the return of its puffins. 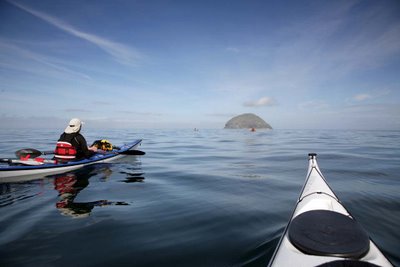 Having teased you with remote glimpses of Ailsa Craig from the Clyde coast of Ayrshire, I think it is time for a closer look. It is best to choose a day with a good forecast as the volcanic plug stands in spendid isolation, 15km from the nearest land. It is also known as Paddy's Milestone as it is half way between Belfast and Glasgow. It is on the sea route taken by many Irish families who travelled to Scotland following famine in Ireland. Its microgranite has been quarried for the production of curling stones used in a popular Scottish winter pastime. 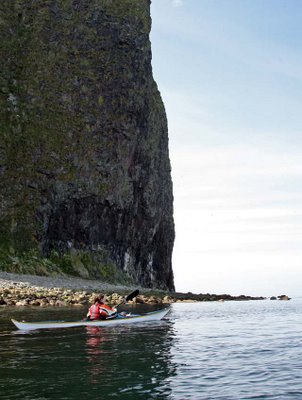 We went in May when the thousands of seabirds had returned to their breeding grounds on its precipitous cliffs. We paddled past colonies of gannets, fulmars, guillemots, black guillemots. and razorbills. 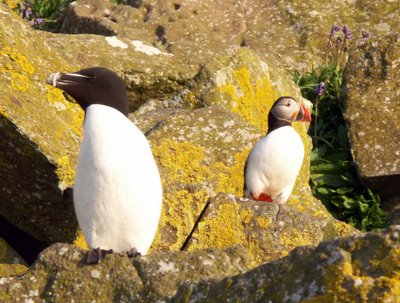 A particular treat was to see a small group of colourful puffins. Last century, a colony of over 30,000 pairs had been wiped out by rats which escaped from a ship wreck. The puffin burrows were too accessible and the rats preyed on the chicks and eggs in the spring and summer then cannibalised each other during the autumn and winter. The rats were recently exterminated using poisoned grain. Within a few years, a small breeding colony of puffins has reestablished itself. They are now a welcome sight, evidence, on a very small scale, that what man has done, he can undo. Let's just hope the climate is as fortunate as a few puffins.
Posted by Douglas Wilcox at 7:14 am 4 comments: