Time for a sharp exit at West Loch Tarbert Pier. 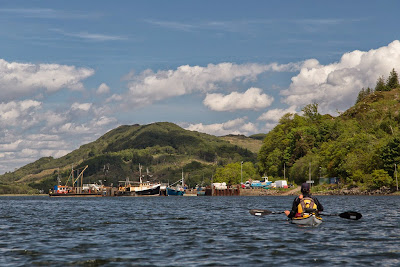 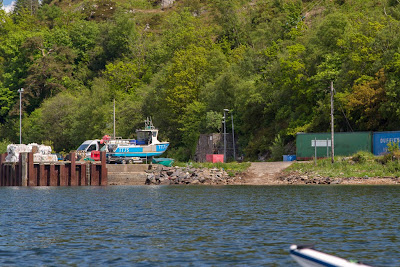 ...slipway, which I had sussed out in December 2011. However, I was persuaded by a friend who had come this way last year that there was a much better exit 850m further up the loch. Well I will come to that but in the meantime, let me just say that if you come this way and plan to portage the isthmus to East Loch Tarbert, EXIT HERE.

As it was, we paddled past the busy pier towards the head of the loch. The towing vessel Mary M was tied up, she spends most of her time on the Clyde. Unlike us she would need to return to the Clyde by motoring round the Mull of Kintyre. At 7m wide she is nearly 1m too wide for the Crinan Canal further north. West Loch Tarbert is the homeport for trawler Fionnaghal, TT104, built in Berwick upon Tweed in 1989. She was tied alongside  Campbelltown based Silver Spray III, TT77. She was built in Stromness in 1986 and is licenced for prawns and scallops.
Posted by Douglas Wilcox at 7:24 am No comments: