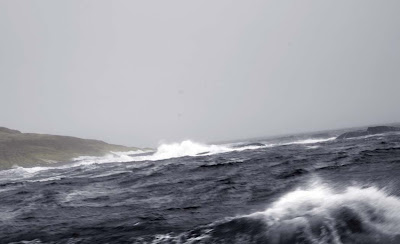 June 2006 was stormy off the west coast of the Outer Hebrides. We were out there in a 70 foot fishing boat and had to run for "shelter" in Loch Reasort. 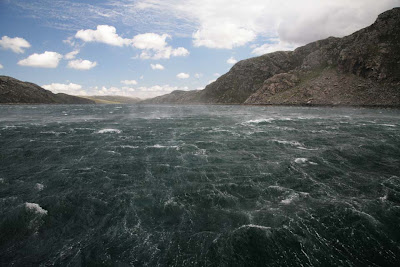 At times like that I always think of the RNLI. Have a look at John's blog for details of their work. I have been a supporter of the RNLI for many years and I would urge all UK and Irish seakayakers to give their support. Today I received my copy of "The Lifeboat" the RNLI journal.

It tells of a dramatic rescue (a few days later than my photos above) which involved a Dutch 12m racing yacht. She was pitch-poled and flattened by a monster wave in winds exceeding force 9 about 25km to the north west of Barra at the south end of the Outer Hebrides. The skipper was injured, the shroud plates were damaged, her standing rigging loosened, the mast mounted electronics were damaged and the keel bolts loosened. He put out a PAN PAN call on the VHF requesting urgent assistance.

Stornoway coastguard picked up the call and requested the launch of the Barra lifeboat. She is the Edna Windsor a Severn class and Coxswain Donald MacLeod took command. He was really worried that the yacht would attempt to reach shelter through the treacherous Sound of Barra to the north but could not make contact with her. He decided he would need to take a shortcut up the east of Barra and through the Sound to head the yacht off. There are three routes through this sound and the best would depend on many factors. Donald called his father and asked if he could go over and advise which route he should take.

The lifeboat had to reduce speed from 25 to 5 knots as it slammed into 10 to 11m swells. Eventually they cleared the sound and were heading for the yacht's position at 12 knots when they realised their electronic navigation equipment had been damaged by the pounding and it was too rough to use paper charts.

Once they found the yacht, they guided her for the Sound of Sandray to the south of Barra. The treacherous nature of this channel is only exceed by that of its northern neighbour and it was vital the yacht followed the lifeboat closely. She was making 6 knots under her storm rig so the lifeboat had to slow to a speed that put her in danger. A monstrous wave slammed her over by 100 degrees plunging the wheelhouse under water and damaging her.

Recovering, she led the yacht to safety. 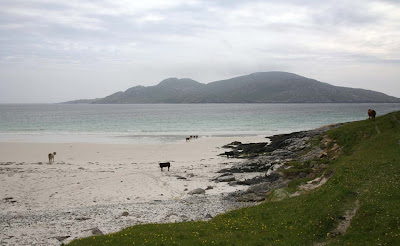 Thanks guys!
Posted by Douglas Wilcox at 8:07 pm 3 comments: